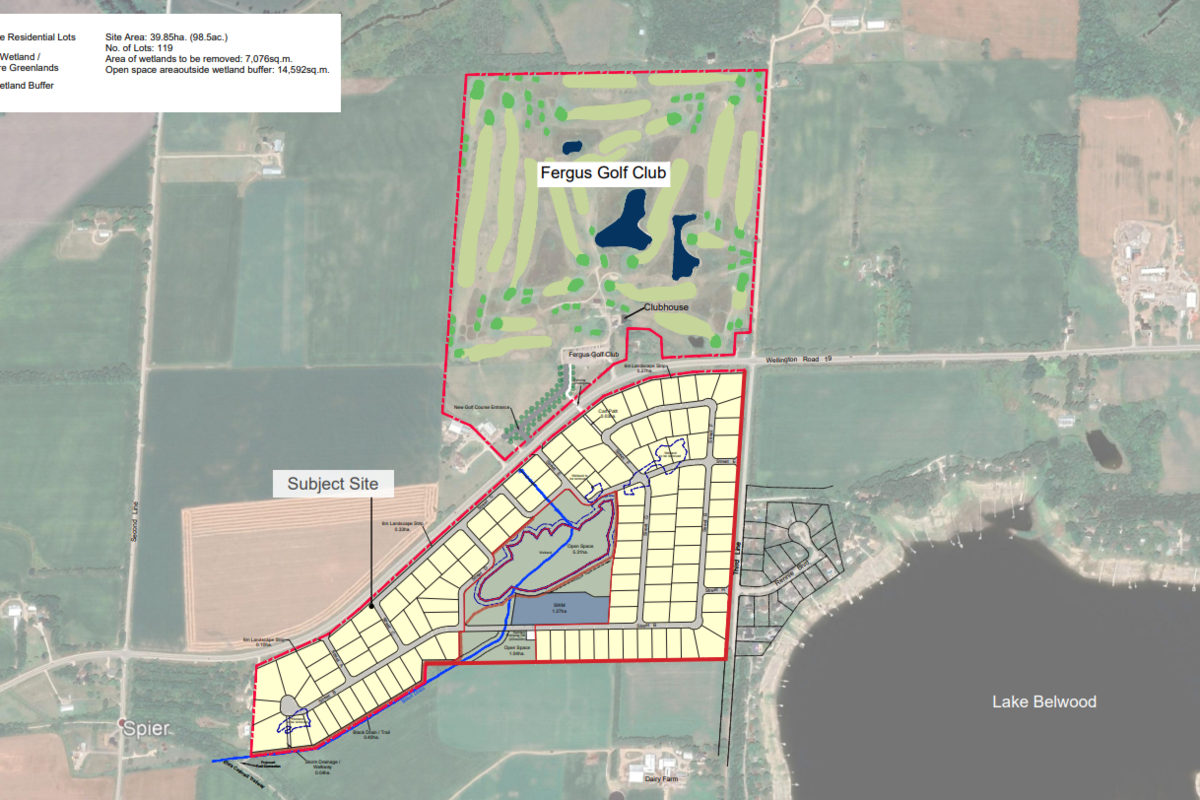 WELLINGTON CENTER – A recent zoning application aims to pave the way for a large rural housing estate near the Fergus Golf Club – a larger development than a similar development approved in the 1990s on the same site.

A notice dated April 7 with the Township of Center Wellington says a developer has requested rezoning of the lands at Fergus Golf Club – known by the municipal names 8243, 8268 and 8282 Wellington Road 19.

These lands are owned by Golf North, but an official from Geranium Homes has confirmed that they are involved in this project as a joint venture with them.

The grounds of Fergus Golf Club are made up of two sites, one called the NW site which has an 18 hole course on the north side of Wellington Road 19, and the other is the SE site with a nine hole course on the opposite side. of the road.

A planning rationale report by GSP Group Inc. said the proposed redevelopment is to build 118 single-family homes on the SE site.

It is proposed that the units will be serviced by communal water and sewage treatment facilities proposed on the NW site.

Cheryl Shindruk, executive vice president of Geranium Homes, confirmed that this meant the nine-hole course first built in 1977 would be redeveloped, but the new 18-hole course would be incorporated into the development.

The total area of ​​the proposal is approximately 82.2 hectares (203 acres) with the NW site, where there is an 18-hole golf course and a clubhouse, slightly larger than the other where there is a nine-hole course.

Shindruk said the new application isn’t far off what initial approvals envisioned, houses and a golf course, but it’s bigger.

“(It) continues to maintain the residential/recreational combination as there is an 18-hole golf course on the north side of County Road 19 that did not exist at the time of previous approval,” Shindruk said.

She said she considers this proposed application to be very necessary to increase the supply of housing in the Greater Golden Horseshoe. Although it is outside of an urban boundary, Shindruk said she felt it was consistent with what exists in the area.

“There’s quite a bit of housing across the street on the third line, Rennie Boulevard and in and around the whole Belwood Lake area there’s a mix of housing options,” said Shindruk.

Although there are a fair number of steps to go through, Shindruk said they want this to be treated as a “complete package” to speed up the process.

A notice from the township indicated that a public meeting for this request would be scheduled for a later date and Shindruk confirmed that they were working to make this happen in the near future.

“We will be looking to get shovels in the ground as soon as possible and get the approvals we need to do that,” Shindruk said.