A Quick Nine with Garrett Rank 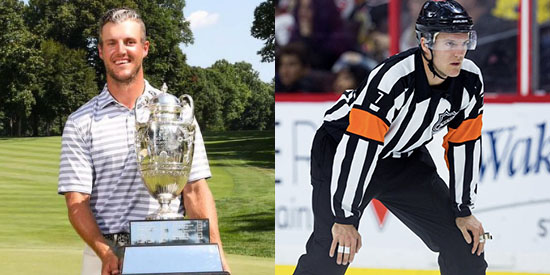 Garrett Rank’s journey to becoming one of the world’s best mid-amateur golfers began where every little boy’s dreams begin if they grew up in Canada – the hockey rink.

Rank’s story, which took him from a humble ice rink in his small hometown to the noisy surroundings of Madison Square Garden with a stopover at the Shinnecock Hills Golf Club, is now somewhat familiar, but no less fascinating. .

Growing up in Elmira, Ontario, located about an hour and a half west of Toronto, Rank was practically born on skates. He didn’t start playing golf until he was 10, when he and his older brother, Kyle, spent the long Canadian summer days hanging out on the local course.

“My parents knew it was a safe place for us to hang out and stay out of trouble,” Rank said. “I was there from 8 am to 8 am every day.

It was at the age of 14 that Rank started whistling as a referee, following in the footsteps of his late father Rich, who was somewhat of a local legend in the Elmira hockey community. He rose through the ranks to work in Ontario Minor Hockey Association games, Junior B games with the Ontario Hockey Association and, at the age of 21, began working in Major Junior Hockey in the Ontario Hockey League.

As a player he rose through the junior ranks in hockey and golf and eventually earned a scholarship in both sports at the University of Waterloo.

In January 2011, midway through his third year at Waterloo, Rank was diagnosed with testicular cancer. After the surgery and subsequent treatments, Rank no longer had cancer, but his hockey career was over.

“For me, it happened so fast,” he recalls. “I (received the diagnosis) on a Friday and Monday morning, I had an operation. I didn’t have a lot of time to figure out or dwell on the fact that I had cancer. It was more like, ‘OK, I have this thing and we’re going to get rid of it and then we’re going to get on with my life.’ “

Pursuing his life meant focusing on officiating and golf. Rank played his role on Canada’s National Team and, in 2012, finished second to Nathan Smith at the 2012 US Mid-Amateur held at the Conway Farms Golf Club outside of Chicago. In 2014, he won his first of two consecutive Canadian mid-amateur championships and in 2019, Rank became the first Canadian to win the Western Amateur Championship in 42 years and the first mid-amateur to win the title since 1997 .

He has competed in 23 USGA Championships, including three US Mid-Amateurs, nine US Amateurs and the 2018 US Open in Shinnecock Hills.

On the ice, Rank was promoted to the NHL in January 2015 and has now officiated over 400 games.

If Miguel Angel Jimenez hadn’t already thought about being “the most interesting golfer in the world”, that nickname could well belong to Garrett Rank.

In our latest installment of “A Quick Nine,” Garrett talks about his parallel runs in hockey and golf, growing up in Elmira, and how he stays sharp during the off-season while bouncing across the country as as an NHL referee.

A Quick Nine with Garrett Rank

Why do hockey players – and of course officials – make such good golfers?
The slap is very similar to the golf swing. I notice that a lot of hockey players have the same movement through the ball and the eye-hand coordination involved is very similar. In Canada, the seasons barely overlap and it is a sport with relatively low impact and risk of injury. contact sport which makes it attractive to hockey players.

What was your introduction to golf growing up in Elmira, Ontario?
My father and my older brother both played. My brother is a very good player himself, so it helped me to accompany them at a young age before finally working at Elmira Golf Club for several years. My parents used to joke that membership was cheaper than babysitting. It was a break all day, whether on the course, working with friends on the chipping and putting green while losing lunch money.

Have you ever thought about going professional?
I have gained a lot of experience playing on the Golf Canada national golf team and in track and field at the University of Waterloo. When I left school, I didn’t think my game was very good. I have improved considerably since then, but I have no regrets. I have had the chance to participate in great events at all levels. Ultimately, I didn’t have enough self-confidence at a younger age which stems from success and it only happened to me when I got a full time job.

Hopefully Garrett Rank doesn’t have to break off fights between players at Shinnecock this week, even though he could if he needed to. pic.twitter.com/6v0cfltrCL

How to stay sharp during the hockey season?

I won’t touch a club until Christmas. I have to pack so much golf during the summer months that my body and brain need to relax. I will use a simulator and launch monitor to do some technical work and try to play 5-10 times while traveling in warmer climates during the season. I have always grown up as a two-sport athlete. I’m so excited to be taking the class back in April and I’m not sure if I would feel the same playing all year round.

What has been the highlight of your amateur career?
Winning the Western Amateur in 2019 was my best moment. I had put so much time and energy into trying to reach my pinnacle in golf that year and it was truly rewarding to finally get there. I didn’t know what I was chasing all these years, but I had gotten closer in a number of situations and it was exhilarating to finish off with a big goal.

We really hope that Hoisting the Thorne becomes a thing. pic.twitter.com/MHC1r6FT6u

Royal Melbourne, I love the bunkering there. Royal County Down the first nine were amazing and anywhere in Chicago because I was successful there and I really love the courses. Of course, Elmira Golf Club for her memories and her nostalgia.

What is your routine during the summer?
I try to use April and May to get back in the game, then June, July and August are filled with 7-10 tournaments. I’m an absolute golf nerd and addicted to the game, so I wouldn’t want it any other way. I spend my training time at Westmount Golf & Country Club and it’s amazing. The members are awesome and the course is pure. During tournament weeks I will play a practice round and try to rest as much as possible before staying cool. I’ve also met a lot of great families at the tournaments I play every year so it’s great to visit them. Playing a similar schedule each summer, you become aware of the nuances of each course.

What part of your game are you still working on?
Your little game can never be tidy enough and your mind never sharp enough. I’ve done a really solid job on my short game over the last 3-4 years trying to make it bulletproof and you can really save a bunch of hits or do something of a trick when you don’t have your best stuff. I have also matured and learned from past experiences to try to be mentally better with my emotions, decision making, and self-confidence. It’s a free way to dramatically improve your skills with a great head.

Which NHL players would be at the top of your list as four-ball partners?
I know a lot of guys are really good at golf and we always have fun conversations about it on the ice, but at the end of the day none of them want to be paired with the umpire.