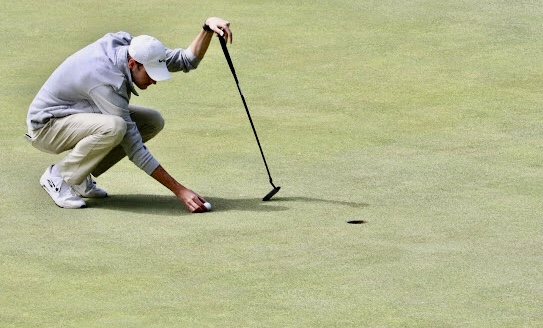 BRUNSWICK — A transformer exploded, knocking out power during the annual Challenge Cup between top local pros and many of the region’s top amateurs last week at Troy Country Club.

But despite some minor setbacks with the posting of the scores, the Capital Region Amateur Golf Association retook the Cup with electric performances from their talented youngsters to fend off a late charge from the pros.

The CRAGA team, led by the Siena College tandem of Nolan Crowley and Nick Lyons, won 31.5-22.5 over the PGA of Northeast New York, which won last year. Each team fielded 12 players, who competed in tandem and individual match play. One point each was awarded for winning front, back and total in each team and individual match. There were nine points available in each of the six quartets.

Longtime amateur captain Dan Russo of the Schuyler Meadows Club was delighted that a new group of amateurs played a huge part in the victory.

“It’s great,” he said of the hard work of the youngsters. “I was delighted to hear how all the young guys did. It’s always good to involve new people, especially the kids. It’s always fun to play against the pros because we amateurs don’t “We don’t have much luck playing against them. They are our peers for sure.

“It was really cool that two of us players from the Siena team got nine points,” said Crowley, former Section II player of the year. “We actually won the match on the 16th hole. Then we played a match against each other on the 17th and 18th holes.

Crowley said he and Lyons had five birdies in their match.

“The greens are very tricky there,” he said. “It’s the first time I’ve played there. It was hard to start at first. It was a really cool course, and I got to check it off my list of courses I’ve played.

“This is my first time playing in a legit format against the pros, but I’ve played against several pros in the area before. There was some pressure at the start, but once we took the lead in our game we were able to relax a bit. We had no idea what the amateurs were doing there, although I saw AJ on the course and he said he was winning his game. I love playing team formats, and it was great to play in this event.

Although the amateurs took a huge lead over the top nine, the pros stormed in. They were led by Burden Lake CC’s Justin Hearley with Pittsfield CC’s Eric Mabee, who earned 7.5 points against the Schenectady Municipal tandem of Paul Pratico and Lance Hope. Hearley shot a bogeyless 67 4 under par.

Also excelling for the pros is Scott Berliner with Scott Battiste, 11-time NENY PGA Player of the Year and reigning Stroke Play titlist. The two Eagle Crest Golf Club pros had 6.5 points, despite Berliner struggling with his swing on the front nine before pounced on his back.

“It’s always fun to play against [Berliner] because he’s definitely the best player in the region,” Russo said. “For the first 10-11 holes Scott played very badly for him, but he’s really the par shot. He’s head and shoulders better than anyone here.

I appreciated the spectacular efforts on both sides. CC of Troy was in exceptional shape. Longtime thanks to Troy CC Chief Pro Mike Kucera, NENY PGA Executive Director Tracie Warner, Operations Manager Christian Torres and their staff for helping to organize another competitive event.

The Capital Region also put in a lot of effort at the annual New York State Men’s and Senior Men’s Amateur Four-Ball Championship this past weekend at Leatherstocking Golf Club.

Former Troy CC standout Matt Clarke, now at Cazenovia CC, teamed with Buffalo CC Bob Rosen to win the senior division by two strokes with a 9-under 135. Clarke had three eagles in the two days. Former Eagle Crest Golf Club owner Bill Paulsen Jr. and Orchard Creek’s Jim Mueller are tied for third with a 6-under 138. Dan Ireland and CC of Troy’s Chris David are tied for fifth at 139 of 5 under.

The local pros compete in their Pro Classic No. 3 at Malone Golf Club on Tuesday.

The next major event for local amateur men is the Troy Invitational on June 11-12 at the Country Club of Troy.

The Saratoga County Men’s Amateur, which is no longer open only to Saratoga County residents, will be played July 1 at Eagle Crest Golf Club and July 2 at Saratoga Spa State Golf Course. There will be two scratch divisions for the 36-hole event – open and senior. Tee times for the opening round begin at 7:30 a.m. Tee times for the second round will be later in the day. The registration fee is $95. Make checks payable to Saratoga County Am and send to Salvatore Romano, PO Box 136, Clifton Park NY 12065. For more information, contact Romano (518-339-2060) or Dave Smith (518-813 -1695).

The second annual 9 & Dine Golf Scramble, benefiting To Love a Child, Inc., will take place July 22 at the Fairways of Halfmoon Golf Club. Registration will take place at 3:15 p.m., followed by a 4 p.m. departure. Admission is $85 and includes nine holes of golf with cart, prizes, Italian buffet dinner and cocktail. There will also be a themed basket auction and 50/50 raffle. For more information, contact To Love a Child, PO Box 165, Clifton Park, NY 12065 or call 518-859-4424. Proceeds will go to Food Forests & Clean Water in Zimbabwe and Thyme to Thrive Educational Programs in the capital region.

David Duval, whose father and grandfather were Schenectady natives, will be the featured player in the inaugural Charity Skins Gaming Tournament to benefit Schenectady Boys and Girls Clubs on August 16 at Mohawk Golf Club. Homestead Funding will be the hall of fame sponsor. A former No. 1 ranked player in the world, Duval has won the Open Championship and Players Championship among his 13 PGA Tour victories. Blaine McCallister, who has five PGA Tour victories and is well known to local golf fans as a longtime competitor in the former Ellis Hospital Capital District Skins Game, will host the tournament.

Two other names familiar to golf fans will also be listed in the four-person skins format. Darren Clarke has won 21 tournaments around the world, including the 2011 Open Championship. He was a five-time player and captain in 2016 of the European Ryder Cup team. Fred Funk has won the PGA Tour eight times, including the Players Championship, and he has also won the Champions Tour nine times. He was a member of the 2003 and 2005 Presidents Cup team as well as the 2004 Ryder Cup team for the United States. Contact Joel Slutsky (518-376-9909) for more information.

Airway Meadows hosts the 17th annual Wilton Rotary Golf Classic on June 18. Admission is $100 and includes golf, light lunch and dinner. The format will be a four-man race at noon. Special events during the tournament include a chipping contest, putting challenge, and corn hole competition. Contact Don Wildermuth (518-430-8670) for more information.

The 31st annual ALS Memorial Open will take place on June 22 at the Van Patten Golf Course. The format will be a scramble, starting at 11 a.m. Proceeds will go to the ALS Regional Center in St. Peter. The event has already raised $2.3 million. Admission is $760 per foursome and includes golf, cart, golf balls, packed lunch, 19th hole reception and dinner. There will be a shootout at 10:30 a.m. There are also many sponsorship opportunities. You can register on www.alsmemorialopen.org or contact Scott Daly (518-339-0491) or Steve Michaels (518-772-9489).

At the Edison Club, Keith Dolan hit an 8-iron for an ace on the 150-yard fifth hole, and Kyle Adams used a 6-iron for his hole-in-one on the 171-yard seventh hole. It was his third career ace.

Luke Pezzano recorded a hole-in-one, his first, on the 17th hole of the Schenectady Municipal Golf Course.

Sue Ryan used her driver to record a hole-in-one on the 83-yard eighth hole at Cobleskill G&CC.

Rit Carney posted an eagle-2 on the par-4 11th hole of the Schenectady Municipal Golf Course as he drilled 140 yards.

Jack Horne also picked up an eagle on the 12th hole from Schenectady Municipal.