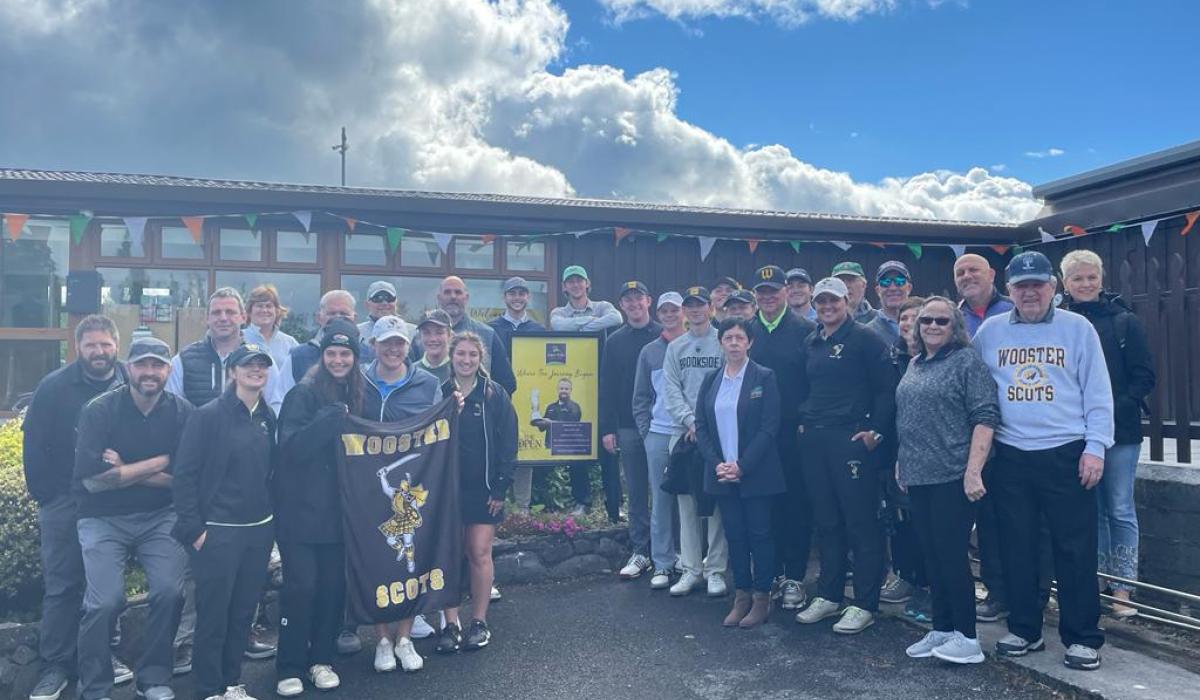 A group of third tier students from the United States received a traditional Irish welcome when they visited Esker Hills Golf Club on Monday afternoon.

A few dozen members moved out to greet visitors to the College of Wooster in Ohio, about an hour from Cleveland.

The traveling group of eight men and six women and their coaches are part of the College of Wooster’s golf program, where they are graduate students. It was their very first trip to Ireland and they included Esker Hills in their golf itinerary with Barna in Galway, Enniscrone in Sligo and Royal Dublin and the Island in Dublin.

Visitors thoroughly enjoyed golf at Esker Hills, giving the course a firm boost while the hospitality of the hosts and members really enhanced the day as they partied with them for a few hours, s engaging in a traditional Irish song.

They have some very good golfers on their teams, ranging from zero to a five handicap. None of them would be at Walker Cup level, but a few have competed in USGA championships. As a result, their students are highly unlikely to pursue a professional career in sport and will pursue other careers.

College of Wooster is quite small with 2,000 students, all staying on campus, and the town of Wooster has a population of nearly 27,000.

It is the first time a group of college students have traveled abroad and Danch revealed they chose Ireland as their destination after hearing rave reports from another college about the beauty of the country and hospitality.

“It’s been really great,” he said. “The golf was great and we received great hospitality everywhere we went.”

They visited sights such as the Cliffs of Moher and Bunratty Castle on the west coast, while golf was an important part of their trip.

Funnily enough, they didn’t know that Esker Hills was Shane Lowry’s home course when they originally booked it. Danch said the travel agent only told them this at the time of booking and it was icing on the cake, because Americans really admire Lowry and the raw emotion with which he plays golf. Price and value for money was one of their main criteria, with Danch saying they didn’t want to pay big bucks for courses such as Ballybunion and Lahinch. He said they loved the Esker Hills course and the unique challenge it offered.

Lisa Campanell-Komara, the golf coach, said: “The Irish have been so welcoming to us.”

The desire to play linked golf meant that it came down to Ireland and Scotland when choosing their destination. Campanell-Komara said they wanted the full Irish experience of golf, wind, rain and hills, and the students really enjoyed Esker Hills. “There are more hills than we would be used to, but we wanted to be challenged,” she said, adding that two of the girls shot 78 rounds. say they would like to play it again now that they have a feel for the course,” she added.

Campanell-Komara revealed that the College of Wooster is ranked second nationally for student research and the focus is on getting the right balance between academics and athletics. “Academics are very important,” she commented.

Over 20 sports are offered at the College of Wooster including football, baseball, tennis, swimming, basketball, lacrosse, field hockey, and more. The group arrived in Ireland on May 18.