Announcement of Patriot League Golfers of the Week (9.14.22) 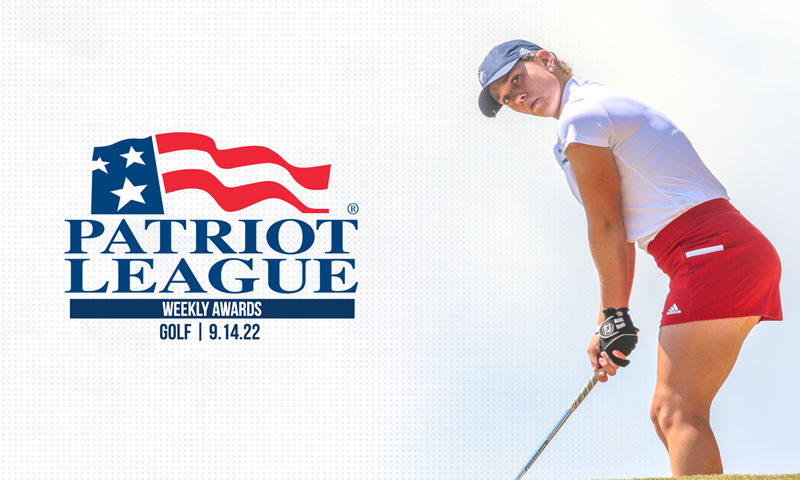 Theam won the Patriot League Men’s Golfer of the Week award after hitting a par 134 8-under (65-69) at Ryan T. Lee Memorial Collegiate to finish second out of 90 golfers.

Lydic was named Patriot League Female Golfer of the Week after earning individual medalist honors at the William & Mary Invitational at the Kingsmill Resort River Course par 72. She won the tournament by seven strokes while breaking the record 54-hole course of Richmond by 10 strokes.

Dragon Theam, Army West Point, Sr., Jacksonville, Fla./Bolles School
* Theam shot a par 134 8-under (65-69) to finish second out of 90 golfers at the Ryan T. Lee Memorial Collegiate par 71 at Shuttle Meadow Country Club in Berlin, Connecticut.
* He shot a par 65 6-under with six birdies in the first round.

Christy Chen, Boston University, So., Guangzhou, China/Guangzhou School of Foreign Languages
*Chen shot a par 216 from 3 over (68-77-71) to finish 13th out of 81 competitors at the 54-hole Yale Invitational. The runner-up shared the lead after the first round, shooting a par 68 3-under collegiate-best at Yale Golf Course’s par 71 in New Haven, Connecticut.

ABOUT THE PATRIOT LEAGUE
The Patriot League is in its fourth decade of academic and athletic achievement, continually demonstrating that student-athletes can excel both academically and athletically without sacrificing high standards. The Patriot League’s athletic success is achieved as its member institutions remain committed to its founding principle of admitting and graduating student-athletes who are academically representative of their class. Participation in athletics at Patriot League institutions is considered an important part of a well-rounded education.