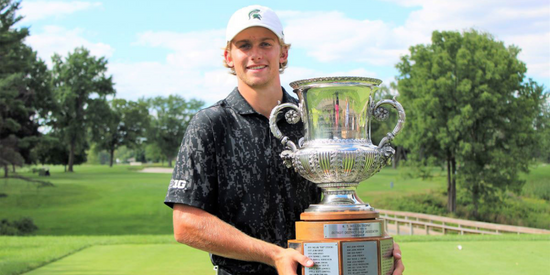 It took some late drama and three sudden-death playoff golf holes before August Meekhof of Eastmanville became the winner of the 101st Golf Association of Michigan (GAM) championship presented by Carl’s Golfland at Plum Hollow Country Club on Tuesday.

Meekhof, a Michigan State University golfer, hit an eagle-3 on the par-5 17th hole in regulation play to take the lead with a stroke.

West Bloomfield’s Grant Haefner, who was playing in his last amateur tournament before turning pro, then birdied No. 18 with a three-footed approach shot while Meekhof made a save following a kick capricious start and a punch from the right of the fairway.

Meekhof shot a final par par 70 in regulation and Haefner shot 69 for the tie at 7 under 203. On the third extra hole, Meekhof rolled in a 24-foot birdie putt for the win.

“That’s what golf is – playing under pressure, so it was great fun that we played pretty close down the stretch,” Meekhof said. “Grant made a nice birdie on the 18th to force extra holes, then we both struggled the first two playoff holes, but I ended up finishing it pretty well.”

Haefner, who recently graduated from the University of Jacksonville (Florida), said he would have loved to leave the amateur ranks with the GAM title, but said he had his chances.

“I had a friend egg in the bunker on the first playoff hole and thought it was over but August didn’t shut the door and then I had a chance to shut the gate on the second playoff hole and I didn’t make it,” Haefner said. “Then August closed it with that putt on the third hole. To be honest, I was pretty happy with how I hit it all day – only a few putts didn’t fall when I wanted to.”

Northville’s Jimmy Dales, a University of Wyoming golfer, had or shared the lead a few times in the final round and was playing in the final group with Meekhof and Haefner. He ended up shooting 72 for 207 and third place.

Three golfers tied for fifth at 209, including Coalter Smith of Grosse Pointe Farms and the University of Wisconsin, who finished with a 72, and Grand Valley State University teammates Charles DeLong of DeWitt, who shot 71, and recent Michigan amateur champ Nick Krueger of Spring Lake, who shot 70.

Meekhof set the wheels in motion for late drama when he hit a second 7-iron from 220 yards out five feet on the No. 17. He made the putt for the eagle 3.

“The pressure and the playoffs, eagle when I need to, it’s been fun and it’s been fun the last few days with my (MSU) teammates here and I’m really grateful my parents came,” did he declare. “It’s been almost a year for me. I’ve been in pretty much every event I’ve been to and it’s finally good to win.

He will see his name added to the KT Keller Trophy with the GAM legends. Last year, the historic trophy was on display at Michigan State’s Lasch Family Golf Center, home to the golf teams. Canton’s James Piot took possession of it a year ago before winning the American Amateur Championship and launching his professional career.

“James had some nice trophies in there,” Meekhof said. “It’s cool that he’s back there this year.”

54-hole stroke play championship with qualification required for those who do not meet the exemption criteria. Open to men with a handicap of 5.4 or less.