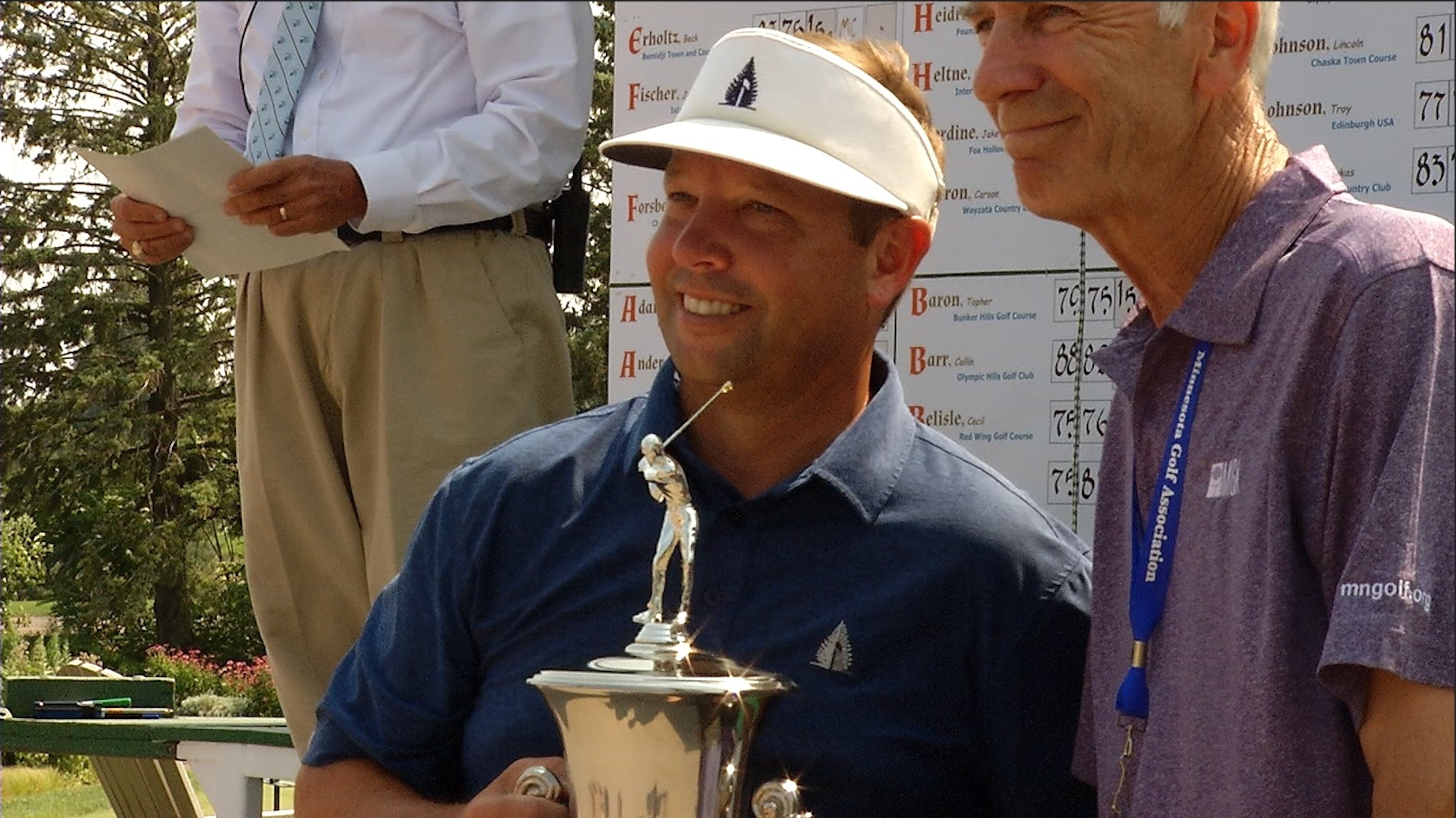 Ben Greve had won just about every local golf tournament up for grabs – but finally won a missing gem in his Minnesota golf crown with a one-shot win at the 119th MGA State Amateur Championship at Olympic Hills in Eden Prairie.

“In Minnesota, there’s that and the State Open. I had never won that. I had a few top five finishes, but never really close,” Greve said after the win. “It’s great, isn’t it? At 41, I had never won this one…didn’t think I would ever do it, but this is just awesome.

After shooting a blistering 6-under 66 first round, Greve went 1-of-73 on Tuesday to lead a five-shot lead into Wednesday’s final round.

“You know it doesn’t look that old but I’m 41 and I haven’t played well in the last few years…to do it here with all the friends that follow and – to be honest – I was just coming to the end. It took all my energy because I didn’t have my game today.

Greve had still held a three-stroke lead until the 18th tee, but in the end the former Gopher needed a nervous three-foot double-bogey putt to secure the victory. It was his only double bogey in the entire three-round tournament.

He finished +2 for the tournament, wiping out a 7 of 79 in the final round for a one-shot win.

“On the back nine…no matter what I did, I was in for a tough time,” Greve lamented. “But I guess in a few years or even a month, I won’t even remember the last two holes.”

Greve held off a trio of collegiate golfers for the win. Miami, Ohio grad student Jack Ebner (Edina) was second at +3, one stroke ahead of Iowa sophomore Ian Meyer (Deephaven) and Bethel senior Conor Schubring (St Louis Park) at +4 .

“They’re so good,” Greve said of Minnesota’s latest generation of golfers. “The last few years when I played, I loved playing with children. Sam (Udovich) is going to be fantastic. We’re going to watch it on TV one day. I love it.

“It’s fun that in golf you can still do that at 41. That probably drives them crazy with the old man’s game and fooling around and always beating them, doesn’t it? There’s a lot of fun in there. That’s the great thing about golf and amateur golf. »

He also won the MSHSL Class A individual title in 1999 at Annandale High School before playing varsity golf in Minnesota, where he was a key part of the 2002 NCAA Gophers National Championship team.

Greve played professional golf on the Canadian PGA Tour from 2008 to 2011, but restored his amateur status in 2014.

According to the MGA, he has won 12 tournaments since joining the amateur ranks in 2014.

He is only the second golfer to win the MGA State Amateur on his home course, and already has an inside track on a possible title defense in 2023.

“This place (Olympic Hills) is phenomenal, but it’s good to have local knowledge because it’s tough,” Greve said. “I was also a member of the Minneapolis Golf Club for a long time, where (the State Amateur) will be next year. Looking at the calendar, it was probably the last chances I could have had.