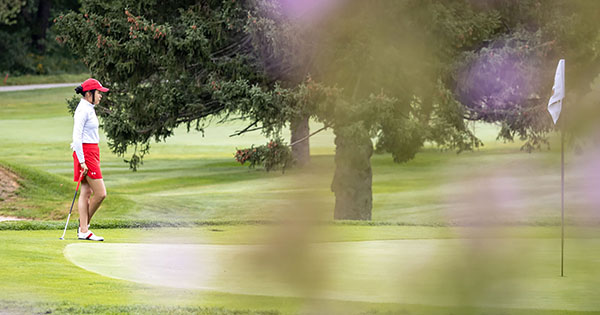 The team’s only senior, Hanako Kawasaki (Questrom’22, SHA’22), is a former Patriot League Golfer of the Year and the conference’s reigning Athlete-Scholar of the Year.

“We had a fantastic season,” he said. “It may be the best we’ve ever had in the history of the program.”

The team has six top-five finishes in nine tournaments, winning first place twice, but one material item is missing from the trophy cabinet. The final event on the schedule is the biggest: the 2022 Patriot League Championship, hosted this weekend by the US Naval Academy in Annapolis, Maryland.

“Our goal is to go down to the Navy and bring the trophy back to BU,” Chalas said. “That will take us to NCAA regionals. We have been there before and we are delighted to be able to do so this year.

The Terriers last reached the national stage after winning their last conference title in 2019. After the 2020 championship was canceled due to the COVID-19 pandemic, BU are two shots away from defending their title in 2021. Still, the runner-up result continued a string of finishes as league champion or runner-up in six of the past seven seasons since joining the Patriot League in 2014.

This consistent level of dominance, Chalas says, has helped the program grow.

If there weren’t enough reason for confidence already, the team put on another signature performance with a victory in their penultimate event of the season, the Hoya Invitational on April 9-10. Chalas says the team is in a great position heading into the Patriot League Championship.

“It’s always good to have a positive attitude and work ethic, and it gives you a bit of appreciation for all the hard work the girls have put in this year,” he says.

“It was great to see everyone contribute,” says Chalas. “In cold and windy conditions, the girls performed fantastically. It’s a good sign to lead in the Patriot League.

The Terriers have been battling the elements all season, Chalas says. Due to the cool temperatures and rainfall, the team was only able to practice on a real golf course once all spring.

“The indoor facility that we have has really become essential,” he says. “The girls have taken it upon themselves to train, and all the girls train more than is asked. They go it alone and work hard. And you make the most of what you have.

Even in a difficult climate, the team’s results did not suffer. As an example, Chalas highlighted his second-place finish at the Babs Steffens Invite in Daytona Beach, Florida on March 27-28.

“We finished second in a very, very good field playing a lot of southern teams. They get to play outside on golf courses every day, and we don’t,” he says. “We use what we have at our disposal, and we are grateful for the support of our former booster students to make this possible.”

The bar is high, but Chalas is optimistic this team can rise to the occasion and win their fifth championship in program history. A victory would mean another shot in the national tournament.

“We have a lot of opportunities,” says Chalas. “We have good players and we have some great goals ahead of us.”

Fans can follow the tournament via PatriotLeague.org and on Twitter via @BUGameDay and @TerrierGolf. Learn more about Terriers online at GoTerriers.com.