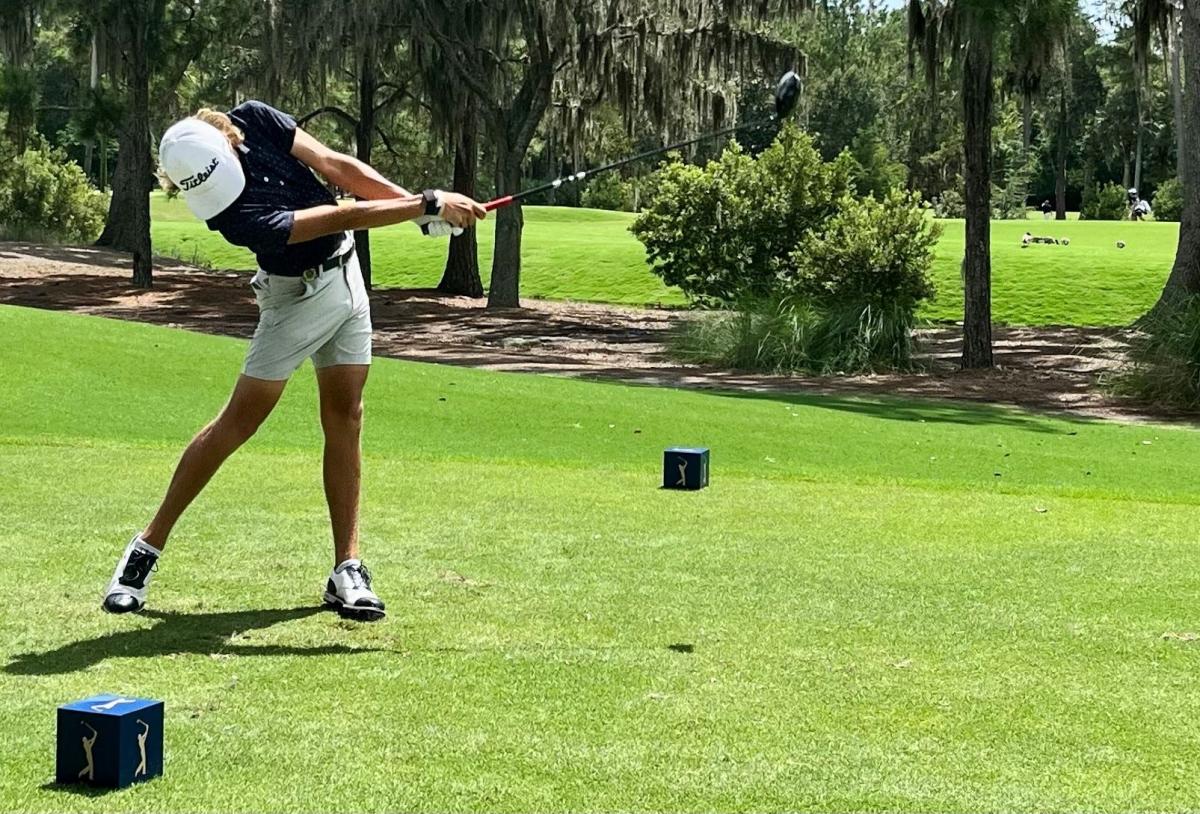 “Cool,” said the eventual winner of the Players Championship.

“Then I left,” Camden Smith said.

But he wants the world to know something.

“I had the mullet before him,” said the Ponte Vedra High School senior who shot 68 on Saturday to race his way into the second round of the American Junior Golf Association’s Junior Players Championship, at the Players Stadium Course from TPC Sawgrass. .

He also has a flat-brimmed Titleist hat and a big smile. Time will tell if Camden Smith expands on the game that Cameron Smith has, but the signs are pointing in the right direction.

Smith, a native of Louisville, Kentucky, whose family moved from Windermere near Orlando to Ponte Vedra Beach earlier this year, nailed his first two holes either side, then weathered a tough spell late to finish at 6 under par 138 and in a tie for fifth place in the 16th annual First Coast Labor Day weekend golf tradition.

Jackson Koivun of Chapel Hill, North Carolina, fifth in the AJGA Rolex rankings and a commitment from Auburn, had a bogey-free 64, including a back-nine 31, and is tied for the lead with Jeffrey Guan of Australia (69 ) at age 8. – less than 136.

“I feel like I played a lot smarter than yesterday [when he shot 72 with six birdies, two bogeys and two doubles, at Nos. 1 and 18]said Koivun. “I gave myself very good chances to score and to make some birdies and even an eagle as well. I knew I had it in me after shooting six birdies yesterday and kept mistakes to a minimum today and it paid off.

Carson Kim of Yorba Linda, Calif., had a bogey-free 68. Ethan Fang of Plano, Texas, birdied No. 18 to finish with the day’s low round at 66 to tie for second at 7 under.

Camden Smith has already achieved a goal: to be part of the Ponte Vedra High lineup

Smith, who committed to Mississippi State, has already accomplished a difficult feat in golf: he broke through the starting lineup of seven-time defending champion Ponte Vedra High Sharks and shot a total of 4 under in 54 holes in his first two tournaments.

He has most of the moving parts of his game in sync in the right direction. Smith is ranked 24th in the Rolex Rankings and this summer finished second in the Western Junior Amateur and tied for fifth in the AJGA Jack Burke Jr. Invitational.

All that’s left, he said, is to stay positive. He and his father Brent, who has coached him since he got serious about golf in 2019 after successfully playing basketball in college, regularly point this out to him.

“That’s one thing my dad and I are always working on is staying positive,” he said. “I used to be super negative, so staying happy, positive and grateful to be here is the most important thing to me. Don’t get caught up in the score. Have fun and do it the next day .

He was tied for the lead after a 4-foot birdie putt at No. 4 (his 13th hole) but wasted two booming drives at No. 6 and 7 with bogeys. He was short of the green and in the bunker after firing a second shot from 70 yards on the sixth, and blasted his second shot onto the green at No 7.

Smith rallied with an up-and-down par at No. 8 and a tap-in birdie at par-5 ninth.

Smith passed through Camden as part of his family for years, until he got to college and his friends shortened him to “Cam”.

“We always joked about it, that I wanted to be like him,” Smith said. “This week, I have the chance to do so. I really admired his wedge game and his putting. I try to imitate him and putt like him.

Camden Smith trained and played with a number of pros who lived in the Orlando area, such as Charles Howell III, Brian Gay, Kiradech Aphibarnrat and Sam Horsfield.

His only regret is that it might be difficult to get a match with Cameron Smith, as he was suspended from the PGA Tour on Friday when he played in a LIV Golf Series event near Boston, and among other things, lost his gaming privileges at TPC Sawgrass.

Smith said he would not judge the decision Cameron Smith and Horsfield made in going to the LIV series and that he remains a fan of both.

“I respect everyone who’s been there,” Camden Smith said. “You do what is best for you and your family.