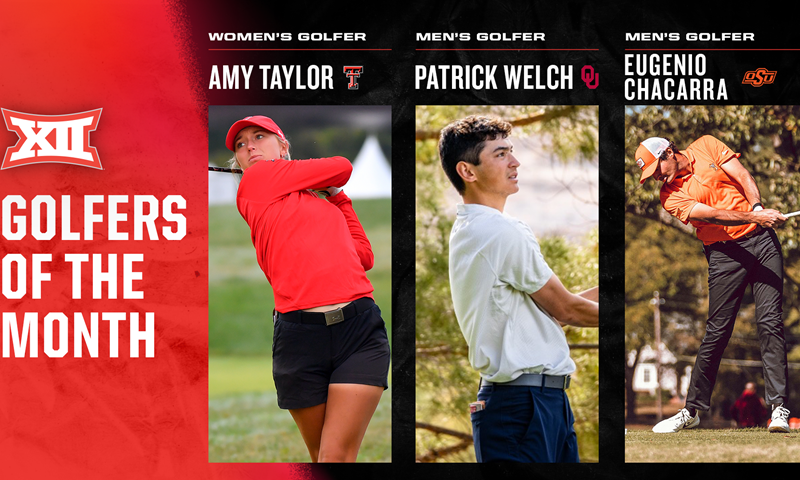 Welch opened February by setting the OU program record with a par 62 10-under at the Puerto Rico Classic. The 2020-21 All-Big 12 team member notched a share of sixth place, the seventh top 10 of his career and helped the Sooners win their first tournament of 2022. The native of Aliso Viejo, California, won the individual title and led No. 1 Oklahoma to win the title at Southern Highlands Collegiate while earning an invite to the Open from Shriners Hospitals for Children on the PGA Tour.

Chacarra picked up his first win as a Cowboy in the spring opener at the Amer Ari Invitational in Hawaii. The senior set a course record with a 10-under 62 in the final round to secure medalist honors and wrap up the team title, the second of the year for OSU. He finished with a 65 to finish tied for third at the VyStar Gators Invitational. Chacarra recorded another top 10 at Cabo Collegiate finishing ninth and moved up to No. 3 in the PGA Tour college rankings.

Taylor finished second at both the Columbia Classic and the ICON Invitational, marking the best results of her career. The 2021 First Team Academic All-Big 12 member’s par 216 at the Columbia Classic finished just two strokes from first place in the tournament. The elder from Norwich, England shot 68-66-66 at the ICON Invitational to tie the lowest round of her career at 6 under par 66 and finish one stroke from first place. Taylor’s 14-under 202 score tied teammate Gala Dumez’s 54-hole school record, while Texas Tech’s 16-under par 272 score marked the lowest 18-hole score in program history , breaking the previous record by two strokes.

The 12 great golfers of the month