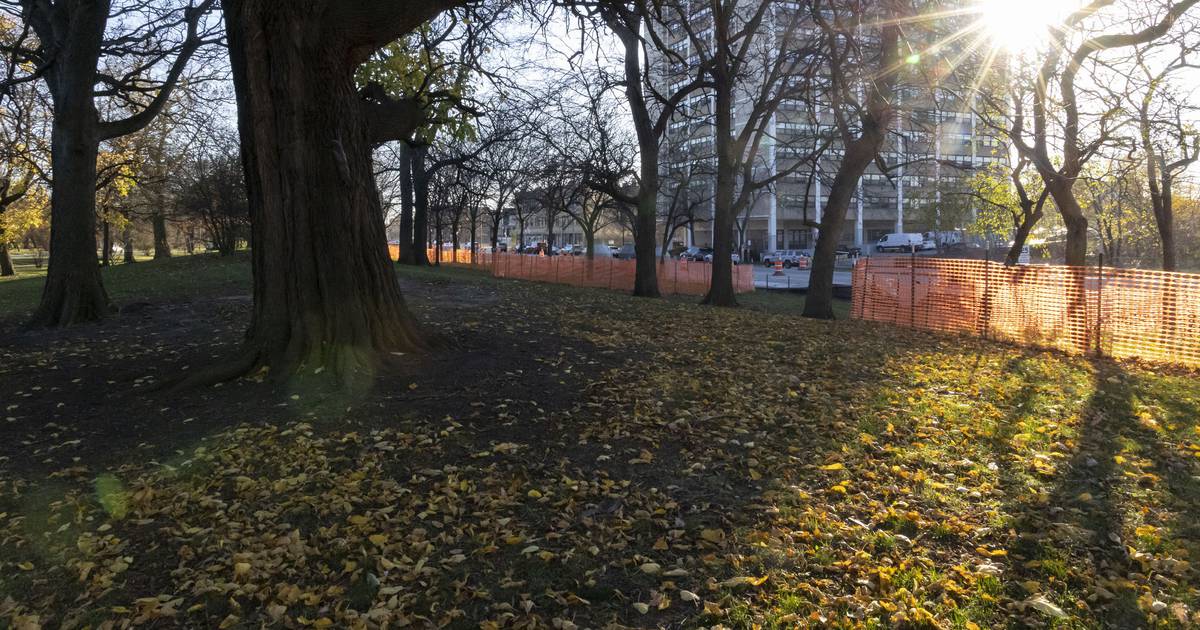 Residents of Chicago’s South Side voted overwhelmingly to oppose the removal of thousands of trees due to construction around the Obama Presidential Center and a proposed golf course.

The non-binding referendum was added to the ballot in seven precincts thanks to the efforts of Save Jackson Park, a group that advocates for the park and the South Rim Cultural Center Park. This group is fighting for the city to stop removing trees for development and instead preserve those that exist due to ongoing public health concerns for the city’s tree canopy.

“When do we start to respect the fact that we need trees to breathe, especially in Chicago?” said Jeannette Hoyt, founder of the group.

Hoyt said the group wanted to put tree preservation in the hands of voters to “give residents a voice.”

“If we hadn’t won, I would have stopped trying,” Hoyt said.

Residents asked this question during Tuesday’s poll: “Should the City of Chicago and the Chicago Park District stop cutting trees in Jackson Park and preserve the trees in South Shore Cultural Center Park?”

The results show that approximately 80% of respondents in each constituency answered yes.

Construction of the Obama Center in Jackson Park involved the removal of more than 300 trees on site and in the future, more than 350 throughout the park for traffic flow, according to documents from the Department of Transportation of Chicago.

Tiger Woods’ company, TGR Design, also offered to restore the two parks’ golf courses, combining them into a single PGA-worthy 18-hole course. According to the design documents, this development could involve the removal of 2,100 trees from the parks.

Construction on the Obama Center began in 2021 and most of the trees on site have been cut down. To manage traffic, CDOT also offered to remove trees to widen some roads around the park, including Stony Island Avenue.

The Obama Center said in a statement that the site conversion of parts of the park will add 3.7 acres of parkland and the landscape “will include more trees than existed before construction began.” .

“The center will increase the amount of green space in Jackson Park that will be accessible to everyone,” the statement said.

Meanwhile, the restoration project for the two golf courses in the parks has not taken off. Planning began years ago, with former President Barack Obama calling on Tiger Woods to take over the project. According to TGR’s website, the proposed golf course would “maintain a traditional parkland aesthetic accentuating natural features” while focusing on “playability” with wider fairways. TGR Design did not respond to the Tribune’s request for comment.

“What makes Jackson Park Golf Course so extraordinarily beautiful is that the trees are interspersed, as if you were walking through an urban park,” Hoyt said.

Hoyt received documents about the proposal from TGR Design in March via a Freedom of Information Act request to the Chicago Park District. A page describing the site’s ecology indicates that the existing Jackson Park golf course is characterized by mature canopy trees. More than 500 heritage trees can be found on the course and nearby park of the Center culturel de la Rive-Sud, according to the document. A heritage tree is a large tree that is often considered irreplaceable due to its age and ability to filter air, shade homes, and provide habitat.

A table in the document shows that at the Jackson Park golf course, about half of the heritage trees need to be removed, and at the South Shore site, 110 of the 163 identified heritage trees would be removed.

“Tree removal will have a significant impact on the Jackson Park and South Shore Park site,” the document states.

The Chicago Park District said in a statement that it plants 3,000 trees a year.

“As with any capital undertaking that requires the removal of trees, the district is committed to replacing every tree as part of the project,” the district said.

The proposed tree removal in these neighborhoods does not appear to align with the mission of the city’s Our Roots initiative, which aims to plant 75,000 trees in five years. Chicago lags behind many other cities in overall canopy cover, and areas with fewer trees are mostly concentrated on the south and west sides.

Hoyt said the cumulative tree removal poses a danger to public health. In Chicago, 16% of families have a child or children who have been diagnosed with asthma, according to a 2020 report from Lurie Children’s Hospital and the Chicago Department of Public Health. This rate is higher than the state and national levels of 11% and 12%.

“We don’t really know what to do about the violence; it’s a multi-faceted problem, but asthma is pretty simple,” said Hoyt, who holds a master’s degree in public health. “It’s the air quality.”

The best stories from the editors of the Chicago Tribune, delivered to your inbox every afternoon.

“A sapling doesn’t create air for anyone,” Hoyt said. “The older the tree, the larger its canopy, and it is the leaves that sequester carbon dioxide, filter particulates and remove sulfur dioxide from our air.”

TGR Design’s layout also puts the 15th hole through the South Shore Nature Sanctuary. The 6-acre sanctuary opened in 2002 and is a stopover point for birds during spring and fall migration.

The conservation organization Openlands has also spoken out against the TGR Design course proposal. The organization offers a form for people to fill out to direct them to the contact details of their local councilor and mayor Lori Lightfoot.

The organization agrees with the premise of restoring the two historic golf courses but not TGR Design’s proposal.

“We oppose any plan that would destroy the South Shore Nature Sanctuary, needlessly cut down thousands of trees, fail to provide diverse golfing opportunities and increase the cost of play beyond our reach,” Openlands said in a statement. communicated.

Protect Our Parks filed a lawsuit in 2018 against the city over the Obama Center. On November 3, a federal district judge ruled in favor of the center’s supporters. The group plans to appeal, seeking to stop the construction of the project, already well underway.