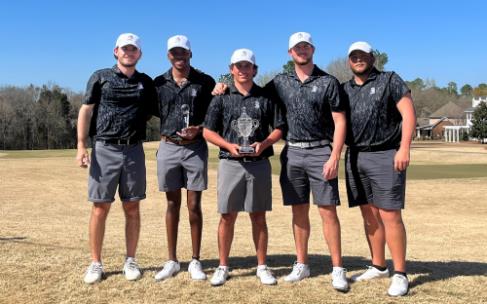 Steve Kibare shot a 2-under 70 to earn medalist honors. Joining him in the top 5 was Cole Wentworth in 4th with a round of 72 (E). Matthew Cleary made three birds in the top 10 with an 8th place finish and a round of 74 (+2). Tyler White finished 12th overall and shot a round of 77(+5) while Trevor Bassett finished 16th overall and had the last block in the final round with a 76(+4).


Coach Ben Rickett said: “Today was a good step in the right direction and a good start to the spring with a win.”

Dalton State will be back on the links March 14-15 at the Golden Tiger Invitational at Chattachoocee Golf Club in Cleveland, Georgia.

Dalton State Women’s Golf shot solid numbers in its final round, but it wasn’t enough as it would finish second in the first spring tournament at Kinderlou Forest’s Spring Invitational at Kinderlou Forest Golf Club in Valdosta on Tuesday.


Sydney Hermann posted another 73 (+1) to finish tied for 2nd place. Hanna Bullard moved up the leaderboard after her round of 76 (+4) to finish for the third consecutive round, Cameron Daniel and Mailey Buzzell shooting the same number. Today was a 79 (+7) for both ladies as they tied for 12th place. Megan Donahue was the last Lady Roadrunner on the roster with an 81 (+11) round. Katelyn Skiffen shot 84 (+12) individually to place 24th.


Coach Jim McGrew said: “It was a solid three rounds to start the spring. We’re a long way from where we need to be, but it’s a great start. To finish 2nd isn’t the goal, but we lost to the No.2 team in the country so we know where we need to improve. It was a great tournament for Sydney against great competition.”


The Lady Birds will be in action again on March 10-11 at the LTU Spring Break Invitational at the RTJ Grand National in Opelika, Ala.