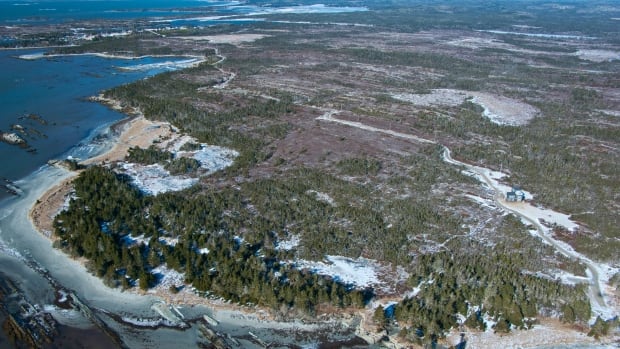 A controversial plan to develop a golf course at Owls Head on the east coast of Nova Scotia is dead.

The company behind the proposal, Lighthouse Links, released a statement to CBC News on Tuesday saying it was withdrawing from the letter of offer it signed with the province in December 2019.

“We have concluded that we do not have the support from the Government of Nova Scotia necessary to make this project a reality,” the company said in its statement.

The proposal was to develop up to three golf courses on 285 hectares of land, as well as tourist accommodation and a possible housing development, in what is known as Owls Head Provincial Park – although the land was never been officially designated a park. Located in Little Harbor, the land is home to what government scientists have called a globally rare ecosystem.

The land was a park reserve and was on a list of properties that could potentially be protected as a park. But that changed in March 2019, when, after years of lobbying by the company, the the Provincial Treasury Board under the previous Liberal government quietly removed the designation.

Lighthouse Links wanted to merge the land with the adjacent land it already owns for the proposed project.

The decision to deregister Owls Head was first reported by CBC News in late 2019. News of the change sparked protests and a legal challenge, which were ultimately unsuccessful. A the judge ruled in July that the issue was not to be decided by a court.

Jamie Simpson, the lawyer who took the case to the Nova Scotia Supreme Court on behalf of environmentalist Bob Bancroft and the Eastern Shore Forest Watch Association, said he was unaware of the company’s decision when contacted by CBC News on Tuesday.

Simpson’s clients were preparing an appeal of the judge’s decision.

The lawyer said what matters now is how the PC provincial government will react to the news and whether it will try to find a new buyer to develop the land.

In a statement, Natural Resources and Renewable Energy Minister Tory Rushton said it was a business decision.

“Crown land belongs to all Nova Scotians and we as a government were ready to consult with the public on the future of the region,” said Rushton.

Hundreds of jobs lost, according to company

The company described its decision to pull out as a lost opportunity.

“Our greatest regret is that residents of the Eastern Shore will be deprived of what could have been hundreds of new jobs during this time of need,” the company statement said.

“In addition, the expected increase in tourism resulting from the project will not occur.”

But Chris Miller, conservation biologist and executive director of the Nova Scotia branch of the Canadian Parks and Wilderness Society, welcomed the news.

“Going forward, the government of Nova Scotia needs to tighten up the legislation to prevent this kind of thing from happening again,” he said.

“They must also urgently apply legal protection to the public lands of Owls Head.”