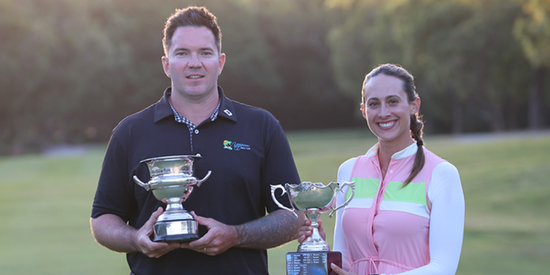 Parish and Arnold became the first Amateur National Championship winners since 2019 following the Covid-19 pandemic-induced hiatus, and they did it in style.

Parish held on to an overnight lead to win by two strokes from fellow Queenslander Dillon Hart, while Arnold produced the women’s low round of the week on Friday to claim a victory by four strokes from Hervey Bay’s Trudi Petrie.

A second round of four under par 68 – the only round in the 60s throughout the 54-hole tournament – set up the Yeppoon Golf Club member’s first national title.

The Central Queenslander finished the week with rounds of 73 and 74, but his two-shot buffer to start the final day gave him enough breathing room to hold on.

Three birdies in his first final round at two under 34 even allowed Parish to go to four on the back nine while earning a relatively comfortable one-under win for the tournament.

“It’s unreal, hard to explain. After not being able to play this event the last two years after turning 30, I haven’t had high expectations lately. I’ve been sick and I don’t I haven’t been training much lately. Amazing to finish champion,” Parish said.

“Same feeling all week, with the putter and the short game, I loaned it out all week, lost it a bit in the back but found out where I was at 17, which really helped me.”

Arnold, a member of Bonnie Doon Golf Club in Sydney, headed for the first tee on Friday just one shot from the lead and immediately made inroads with back-to-back birdies on the par-5 second and third holes.

Her only other birdie of the day came in the 11th, but her round of 76 to two was enough to run away from her rivals and finish 15 over after previous rounds of 80 and 81.

“I started out really strong, stayed strong in my processes one shot at a time and didn’t get ahead of myself. I birdied a few early and felt really good. comfortable in the turn,” said Arnold.

“I didn’t check the standings as I didn’t want to add pressure but I knew I was a behind but I didn’t put any pressure on myself, taking things piecemeal but I started strong, which helped me cross the line.”

Winners of both championships will be financially supported with a $750 grant to attend the 2023 New Zealand Mid-Amateur Championship at Omanu Golf Club.

The Australian Men’s and Women’s Mid-Amateur Championships have been played since 2007. The championships are played over 54 holes in stroke play and are aimed at players aged 30-54.