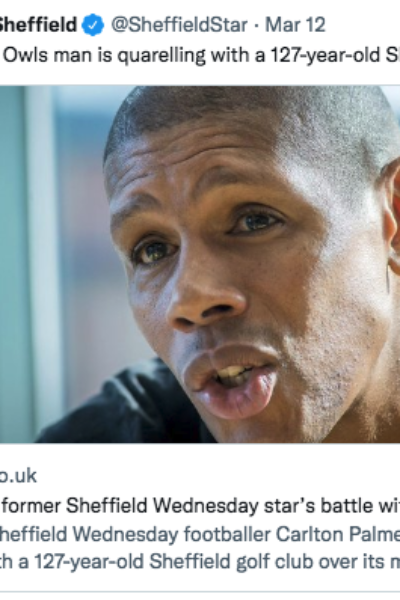 A former England international footballer has spoken to the media about a golf club which refused him membership due to his past behaviour.

Carlton Palmer, who played 18 times for England, believes his fame means he has been treated unfairly.

In the 1990s, he was fined for indecent assault following an incident while drinking with his Leeds United teammates.

He was recently nominated and seconded by other former footballers as a proposed new member at the 127-year-old Abbeydale Golf Club in Sheffield, and as usual his name was listed as a potential member on a open bulletin board within the clubhouse, with existing members invited to provide feedback.

It is understood a member presented tabloid clippings from Palmer’s past to the club’s admissions board, who then rejected his application.

He says he had no direct right of reply.

Talk to The starPalmer claimed there were convictions of existing members of the club, which would mean there is no precedent in place for previous convictions to be an issue.

He believes he has been unfairly victimized, but says his aim is to shed light on the accession process which he has made “archaic”. Palmer says he has since received a number of messages of support from club members and a number of invitations to join other golf clubs in Sheffield.

“It’s not about me anymore,” Palmer said. “It’s an archaic rule that allows people to blackball you. I’ve been told other people have had the same issues.

“Nobody these days should be turned down outright by a golf club. If there’s a waiting list, you wait. I was happy to do that and was always courteous. As long as you are courteous and you follow the rules of this club, there is no reason for you to be refused.

“And if they have a problem with something, you have to have the right of reply.

“It’s not about me being entitled. I was willing to wait if there was a waiting list, but they just rejected my application with no right of reply.

In a statement sent to The Star, a spokesperson for Abbeydale Golf Club said: “We have received an application to join the AGC which is a private club of Carlton Palmer.

“AGC went through normal process regarding the application for membership which was rejected at a board meeting on March 1, 2022. In the usual way, we informed their nominator of the outcome. Carlton Palmer was treated as we would for any other candidate in similar circumstances.

“We have written to Carlton Palmer explaining the reasons for the rejection. The reasons included a reference to information freely available in the media regarding his past conduct. We will not release a copy of this letter. This is Carlton Palmer’s case.