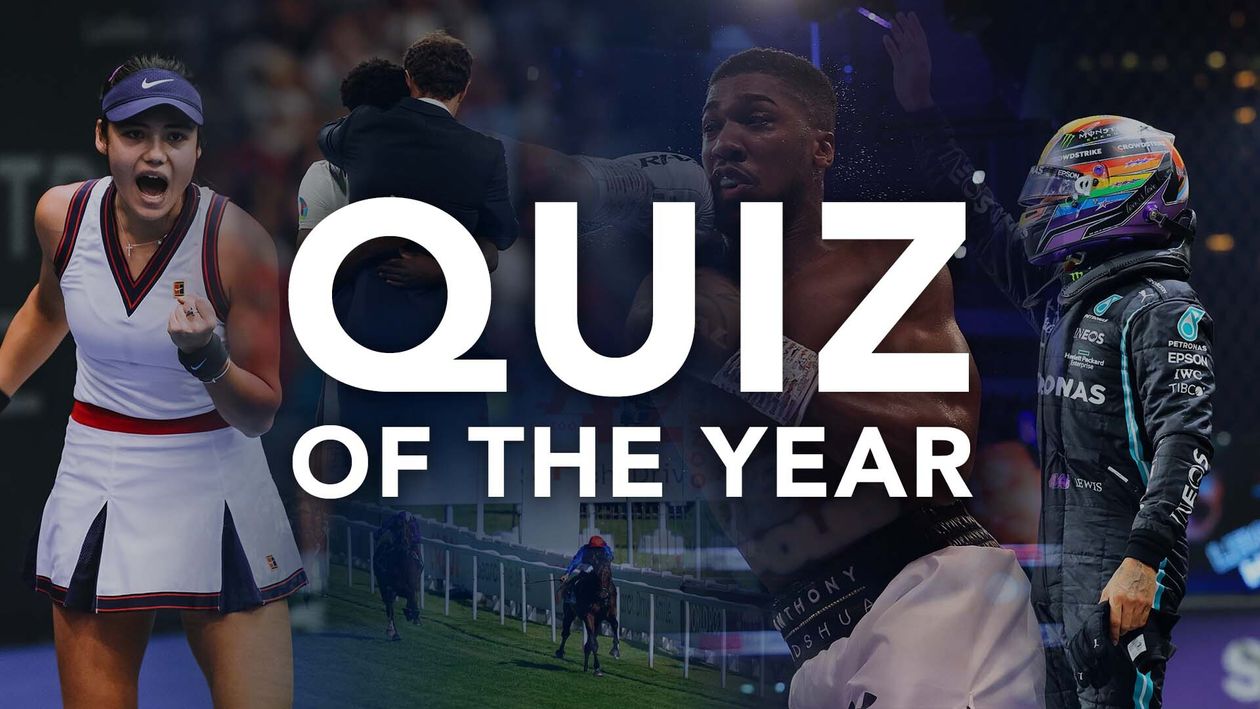 The past 12 months have seen the return of crowds for the delayed Euro 2020 finals and the Ryder Cup, while the Tokyo Olympics have been mostly held behind closed doors.

There were tears of joy at the thrilling success, and also a few tears at the near failure of what could have been.

Here, we test your knowledge of some of the key events of 2021 – but don’t take a peek at the answers below!

Q4: Name the horse that won the Cheltenham Gold Cup in March.

Q5: Who retired from the UFC in March as the lightweight champion with a 29-0 record, after beating Justin Gaethje the year before?

Q6: Wales were crowned Guinness Six Nations champions but were denied the Grand Slam due to a 32-30 loss to which team?

Q7: Who became the first woman to ride the Grand National winner by guiding Minella Times to victory in Aintree?

Q8: Due to the continuing coronavirus restrictions, on which river has the 2021 College Boat Race taken place?

Q9: Which golfer won the 85th Masters at Augusta National?

Q10: Who beat Shaun Murphy to claim a fourth World Snooker Championship title with an 18-15 victory at the Crucible in Sheffield?

Q11: Name the six English clubs that have announced they have to join a new European Super League – only for the project to quickly collapse amid public backlash.

Q12: Which player scored the only goal as Leicester won the FA Cup for the first time in club history with victory over Chelsea at Wembley?

Q13: Which jockey rode his first classic winner in the Epsom Derby?

Q14: Name the winners of the women’s and men’s singles titles at Wimbledon.

Q16: Chelsie Giles won the British team’s first medal at Tokyo 2020 with bronze in which sport?

Q18: Who came second behind Lewis Hamilton in the 2021 British Grand Prix at Silverstone?

Q20: What late-game penalty gave South Africa a spectacular 19-16 victory over the British and Irish Lions in Cape Town to secure a series victory for the hosts?

Q21: Name the male and female champions for the inaugural season of The Hundred.

Q22: Who led Europe to their second away victory in the Solheim Cup?

Q23: Which player finished with five perfect individual points as the United States returned to the Ryder Cup with an all-around 19-9 victory at Whistling Straits?

Q24: Emma Raducanu won the US Open women’s title with a victory over which player in the final at Flushing Meadows?

Q26: Anthony Joshua lost his WBA, IBF and WBO heavyweight titles after a unanimous defeat on points to which fighter at Tottenham Hotspur Stadium in London?

Q28: Who did the England women’s football team beat by a total of 30-0 in two World Cup qualifiers in October and November?

Q29: Name one of the two amateurs who won the first round of the UK Snooker Championship, one of which prompted Shaun Murphy to say, “Amateurs should not be allowed into professional tournaments, late. “

Q30: Max Verstappen beat Lewis Hamilton in the Formula 1 World Championship with a thrilling victory in the final lap of the Abu Dhabi Grand Prix – but which driver caused the dramatic turn of events after the safety car was deployed?

Scroll down for the answers