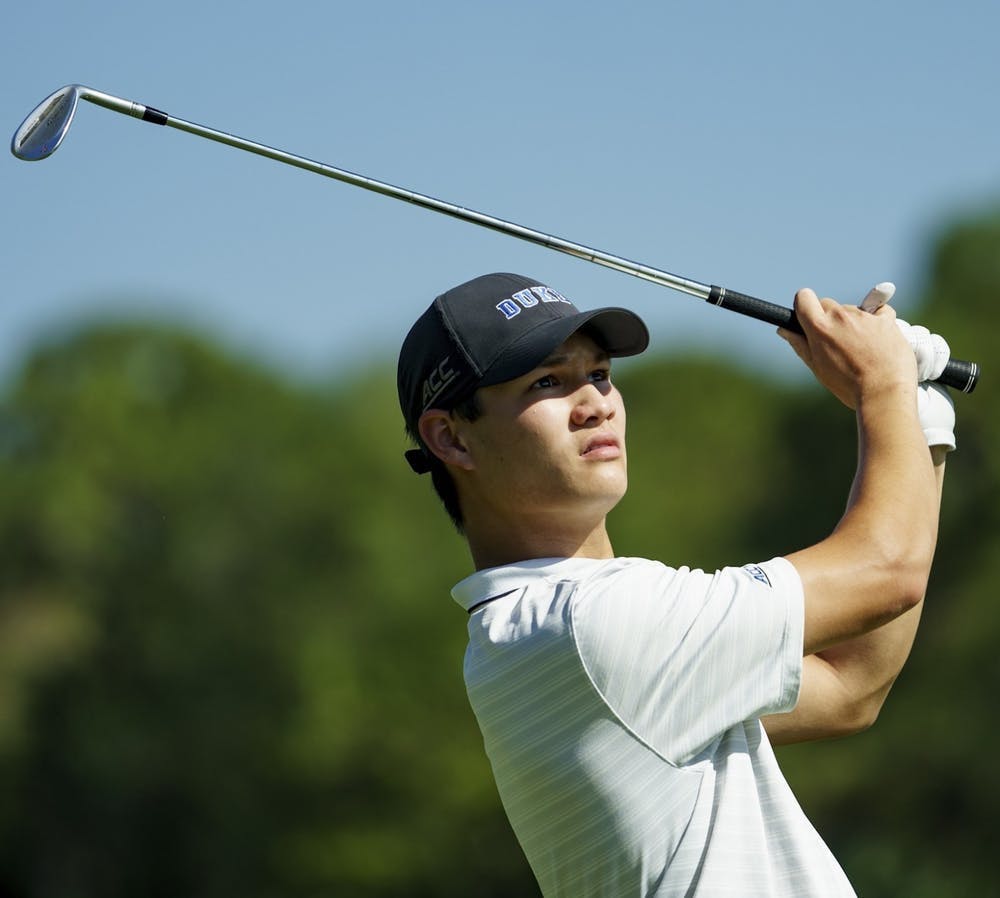 Duke started its fall season in style this weekend with an impressive second-place finish out of 14 teams at the Rod Myers Invitational.

The Blue Devils finished behind only Alabama on the 54 holes of Duke University Golf Club as Duke’s aggregate score of 862 was 11 strokes short of the championship Crimson Tide 851. The strong performance marks Duke’s best performance since his victory in April at the Stitch Intercollegiate, where the Blue Devils beat 12 other schools en route to a 3-under win.

Competing at home, Duke’s roster had far more familiarity and experience with the layout compared to the other competing schools. However, as head coach Jamie Green explained, such foreknowledge can be both a blessing and a curse.

“Anytime you’ve played it enough times to know how to take advantage of the golf course, especially if you hit it in position off the tee, that’s very valuable,” Green said. “We haven’t won this tournament for a number of years and I think part of the reason is that if you play it enough times you also realize where the problem is a bit… Reality is that we need to focus on having fun and remembering all the good shots you hit there.Sometimes you play on a golf course so many times that you also remember the bad ones.

Familiar courses can be a double-edged sword. Players know where they need to hit the ball to be successful, but also know where they’ll put big numbers quickly if they make a mistake. Green described how the first and last four holes at Duke University Golf Club can be treacherous and lamented that his team may have been too cautious in approaching those particular challenges. It takes considerable mental strength to attack courses of precarious difficulty like that of hole 17 – the most difficult on the course – and the left legs of holes 1 and 2.

Nevertheless, despite the team’s previous experience which may have hindered the way to victory, familiarity certainly helped the team achieve a high result. Another factor was the fantastic performance of William Love and Ethan Evans. Both freshmen began their college golf careers by shooting 3 under on the weekends and claiming top-10 spots.

“Really [Love] played some really good golf this summer he won the Georgia State Amateur which is a big deal…and we knew Ethan could play but the fact that he came and felt comfortable on the course golf speaks volumes that his abilities are not just physically but mentally,” Green said.

Love shot twice in the 60s and was also tight on the stretch as his par on the 18th hole on Saturday helped Duke stand alone in second place for the weekend. Of course, not only the freshmen had a strong start to the season. Juniors Ian Siebers and Jimmy Zheng also played well, shooting for par and 1-over respectively on the weekend.

Strong performances across the roster leave the Blue Devils feeling confident after the fall season opener. They will look to build on their positive momentum at the Husky Invitational in Bremerton, Wash., next week, and all 10 golfers on the list will make the trip instead of the usual five or six.

“I’m just looking forward to it because you hate to leave after everyone’s worked hard and having to have four or five guys sitting at home who can’t enjoy this trip because that’s really the part fun to be on a sports team,” Green said, “I know the energy is going to be high.”

Additionally, Duke will once again benefit from some familiarity with the course.

“We actually have two guys on the team from the Seattle area so hopefully we’ll build on the experiences of Ian Siebers and Ethan Evans, they’re both guys from the northwest of the Pacific and they both played at this golf course, so we’ll make sure they share all of their local knowledge with us,” Green said.

Fresh off a successful start to the season, again with some experience on the course and with higher morale because the whole team is making the trip, the Blue Devils are looking to post another impressive score.

Get The Chronicle straight to your inbox