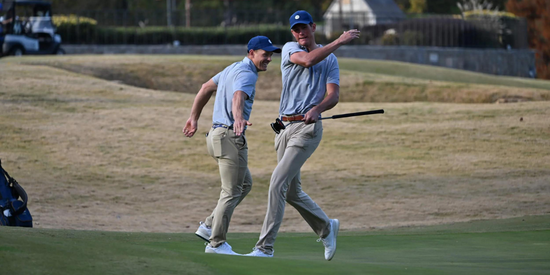 Georgia Tech maintained its lead at the Golf Club of Georgia Collegiate on Saturday by shooting a second-round 279 (-9), but the footsteps behind the Yellow Jackets are loud and persistent.

At 21-under 555, the Yellow Jackets will take a three-stroke lead in Sunday’s final round over the Tennessee Volunteers, who moved up eight spots in the standings by turning in the day’s low round at 16-under 272. .

Georgia Tech freshman Hiroshi Tai backed his first-round 65 with a solid 3-under 69 on Saturday and at 10-under 134, clings to a one-shot lead over Tennessee freshman Caleb Surratt who sits at 9 under (68-67). Pepperdine’s William Mouw and Washington’s Bo Peng are just three behind at 7-under 137.

The Volunteers’ four tally scores on Saturday were in red numbers. The team’s lowest score of the day belonged to redshirt freshman Lance Simpson, who dialed a 6-under 66, which was the lowest round of the day by anyone in the field.

As Surratt moved inside one of the individual headers with a 5-under 67, redshirt junior Bryce Lewis made a 3-under 69 while rookie Evan Woosley-Reed shot a 2-under 70 in his college debut.

Georgia Tech didn’t exactly return to the field with a 279 (-9) second round. Christo Lamprecht and Connor Howe tied Tai with rounds of 69, Lamprecht draining a 60-foot putt from the edge of the 18th green for an eagle to close out his round. Tech also scored a par 72 from senior Andy Mao.

The final round of the Golf Club of Georgia Intercollegiate will begin at 9:00 a.m. ET on Sunday.

ABOUT Golf Club of Georgia Collegiate

The United States Collegiate Championship, hosted by Georgia Tech, annually brings 15 of the nation’s top college teams to the Golf Club of Georgia for a three-day, 54-hole tournament that has been dubbed “the Masters of College Golf.” Launched in 2006, the USCC offers PGA Tour-style championship terms for the nation’s top college players, including a personal caddy for all three tours. Long pants are required and galleries may walk the fairways behind players, as the USCC Walker Cup crowns a team champion and an individual champion and honors them on the perpetual mahogany, gold and crystal USCC trophy, which stands located in the lobby of the Golf Club of Georgia.