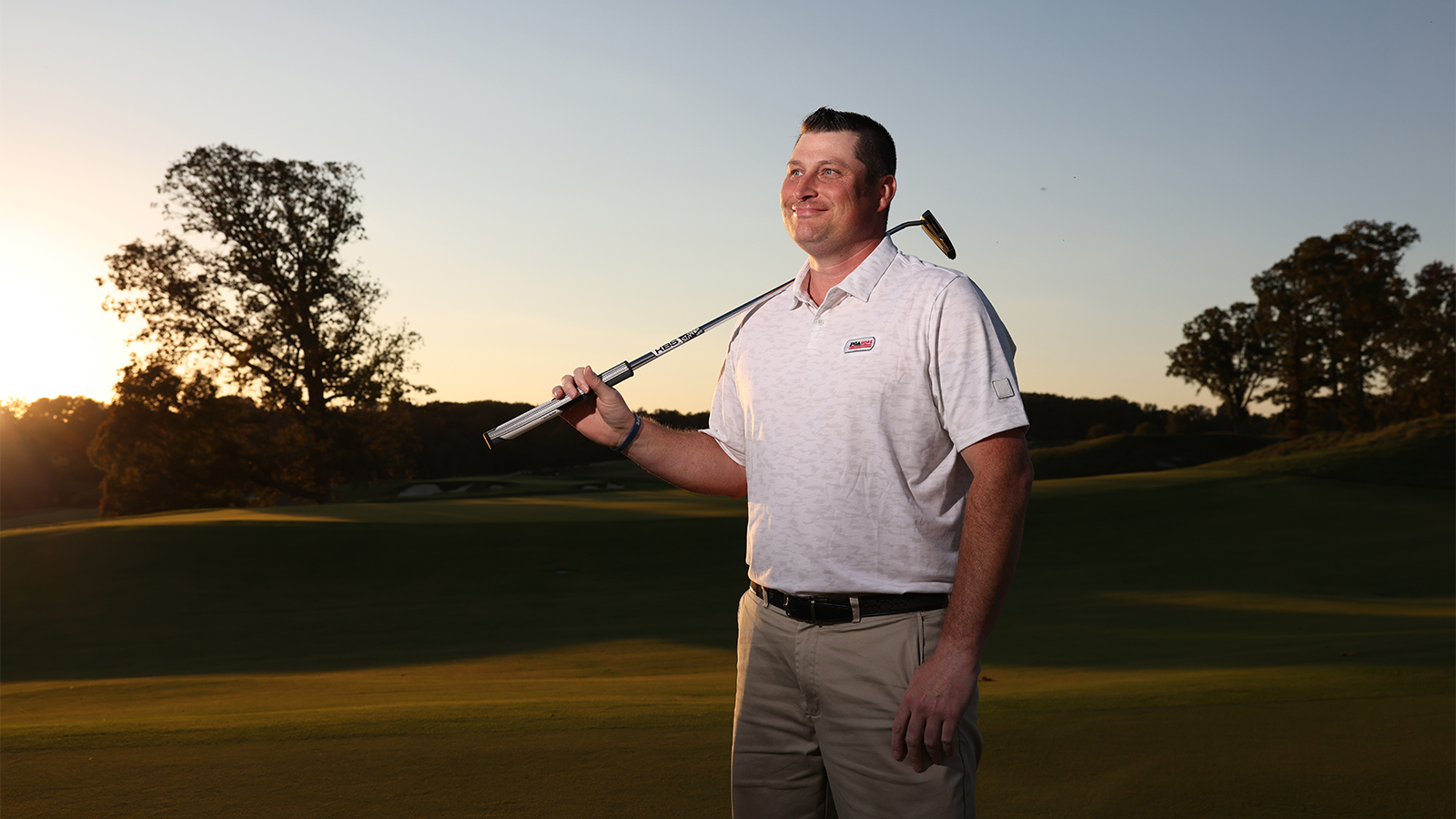 There are days when Sean Bowman just doesn’t feel like leaving his house.

Outside you see a perfectly healthy 42-year-old man who retired from the Navy two years ago, loves his two daughters and loves everything golf has to offer.

Inside, however, Bowman is struggling with severe post-traumatic stress disorder, nerve damage, anxiety, neuropathy, multiple back problems and a traumatic brain injury that occurred 13 years ago and resulting from secondary exposure to an explosion while deployed in support of Operation Iraqi Freedom. and Operation Enduring Freedom.

In this context, he raises his hands and notes that the shaking can be so terrible that he often struggles to even put a golf ball on a tee. This condition was even more problematic late in his Navy career when he served as a member of the hospital corps where he assisted patients by setting up IVs, applying sutures, and administering medication.

“Nobody wants somebody coming near them with a needle that does that,” Bowman jokes in a moment of levity.

So yeah, it’s understandable if there are days when Bowman just wants to be in the comfortable surroundings of his own home. And that’s okay.

But when those days come, Bowman’s pals are the first to call and desperately try to shake him off. His core group of friends in the Chesapeake, Virginia area will call and call and call. They won’t take no for an answer.

“They say ‘man, it’s so nice outside, let’s go play some golf. Get off your ass and go to the golf course,'” Bowman said. “We’re doing this for each other and I think that’s very important. It’s a support group. We’re here to lift ourselves up.”

Support. Friendship. These are all reasons why Bowman took a look at the PGA HOPE program at the Bide-A-Wee Golf Course in nearby Portsmouth. These are also the reasons why he was selected as one of 20 ambassadors to participate in the PGA HOPE National Golf and Wellness Week in Washington, DC, hosted by the Congressional Country Club. PGA HOPE (Helping Our Patriots Everywhere) is a flagship military program of PGA REACH, the charitable foundation of the PGA of America. PGA HOPE introduces golf to veterans to improve their physical, mental, social and emotional well-being.

Bowman grew up in Schererville, Indiana, in the northwest corner of the state. He remembers playing golf with his father from the age of 5. They frequented the practice range together, but Bowman had other interests and also migrated to baseball, basketball and hockey.

“I always played golf here and there, but never took it too seriously,” he says.

There wasn’t much time to play golf during Bowman’s nearly 17-year career in the Navy. Plus, he’s an all-or-nothing guy who needs to play a lot or not a lot at all. He is quick to point out that there is no common ground with him.

“It’s difficult to pick a club once a month or once every three months because I won’t be playing well,” he said. “It’s too frustrating.”

This is no longer a concern.

“When I got out of the Navy I was lost, I didn’t know what to do, where to do it,” Bowman said. “It’s a huge transition when you go from active duty to the civilian world. I found myself going back to the golf course.

Bide-A-Wee’s Director of Golf and General Manager Adam Relan had known Bowman for a few years and eventually, earlier this year, they met on the driving range and Relan told Bowman he thought that the course’s PGA HOPE program would be a good fit. Bowman took a peak, immediately loved the vibe, and went on the two-month program, which ended May 24. Five months later, he was chosen to be an ambassador and represent the Middle Atlantic PGA chapter in Washington.

“I’m glad he’s gone and running,” Relan said. “This guy has a goal and that’s what we all need. We need teammates. He helps develop the game and he helps the vets at the same time. There is nothing better.

“He is an incredible person who has done a huge service to our country. It’s great to have someone like him to help us spread the word.

Bowman loves talking to others about the game and is quick to say that he usually plays up to four rounds of golf a week. His main group tries to play as many different golf courses as possible in Virginia. A game is apparently still available.

“It was one of the best things I’ve done,” Bowman said. “I’ve made a ton of new golf buddies, my phone is ringing non-stop with people wanting to play. It gives me purpose again.

“When we play, we don’t even keep score half the time. I want to hit a good shot as much as I want to see my boyfriend hit a good shot. I want to bring more people into this because I know what it’s done for me. If it worked for me, I guarantee it will work for everyone.

Here in Washington, the group is just an extension of what Bowman found back home. Many of the 20 ambassadors had never met before this week. A few days later, they are far from strangers.

“We hit it off right from the start,” said John Harvey, an Air Force communications center specialist from 1972 to 1975, who was Bowman’s partner in a nine-hole event Friday at East Potomac Golf. Links. “We made the connection and we will stay in touch from now on.”

Bowman said: “It opened up a whole new world for me. I feel like I’ve known these people all my life. There is no embarrassment. There is an immediate sense of belonging. Everyone is welcoming. There is no doubt that they are friends for life.

And these friends will be all set, especially on days when Bowman might not feel like going out.