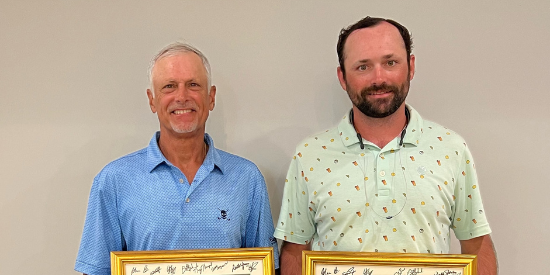 Doug and Drew Hanzel of Savannah, Georgia won their record seventh championship today and past winners took home honors in all three divisions of the 53rd National Father-Son Invitational at the Country Club of North Carolina.

“In the second round we had no bogeys and we played really well,” said father Doug. “Eight Penny is outstanding and gave us a cushion. Winning for the seventh time means our games have aged well. We are undefeated in the senior division. We team up well. I’m steady and Drew throws a timely birdie or two.

Elder Hanzel, who first played CCNC in the 1980 US Amateur (won by Hal Sutton) loves coming back to the Sandhills.

“The tournament is so well organized and the golf courses are so good,” added Hanzel. “We really like playing in it.” 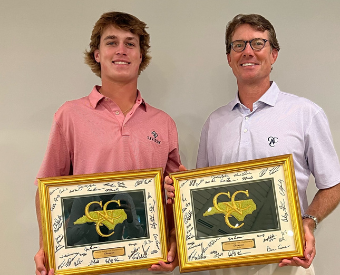 In the Championships Division, 2021 winners Justin and Jackson Bode of Pinehurst, NC and members of CCNC repeated as champions edging out Randy and Scott Hanna also of Pinehurst by one stroke. The Bodes shot 69-65-149 for a 283 under 5 and won in both of their appearances. Young Bode plays college golf at Davidson. 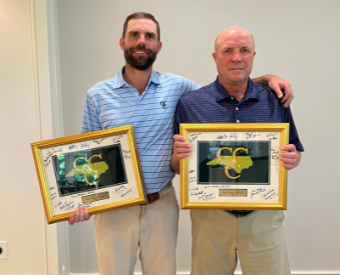 John and Jeffrey Long of Murrells Inlet, SC won the super senior division by three strokes over Skip and Connor Tendall of North Potomac, Md. and Washington, DC, respectively. The Longs, who won the senior division in 2021, shot 65-67-143 for a 13-under 275 total.

The 44-team field was made up of players from 13 states: Alabama, Colorado, Georgia, Maryland, Michigan, New York, North Carolina, Ohio, South Carolina, Texas, Tennessee, Virginia, West Virginia and the District of Columbia who will play the Cardinal and Dogwood courses as part of the three-day competition.

The format for the 53rd Invitational featured three flights, all gross – Championship, Senior, Super Senior. The scoring format was each team’s best ball for the first two rounds from division-designated tees (July 22-23), then the combined score on the final day of the event (July 24) on the very appreciated Dogwood and CCNC Cardinal.

Notable past winners of the National Father-Son Invitational, which began in 1970, include Tom and Tom Kite, Jr; Arthur and Scott Hoch; Rod and Steve Spittle; and Kelly and Blair Miller.

The tournament was designed by Dale Morey, a CCNC member and noted amateur player who was also an LSU basketball All-America. He won the United States Senior Amateur Championship in 1974 and 1977.

by Pete Kowalski, special for AmateurGolf.com

54-hole tournament with Championship, Senior and Super Senior divisions. The first and second rounds are Better-Ball of Pair, and the last round is Aggregate Medal Score. A father can compete with more than one son.

The tournament was designed by Dale Morey, a CCNC member and noted amateur player who was also an LSU basketball All-America. He won the United States Senior Amateur Championship in 1974 and 1977.