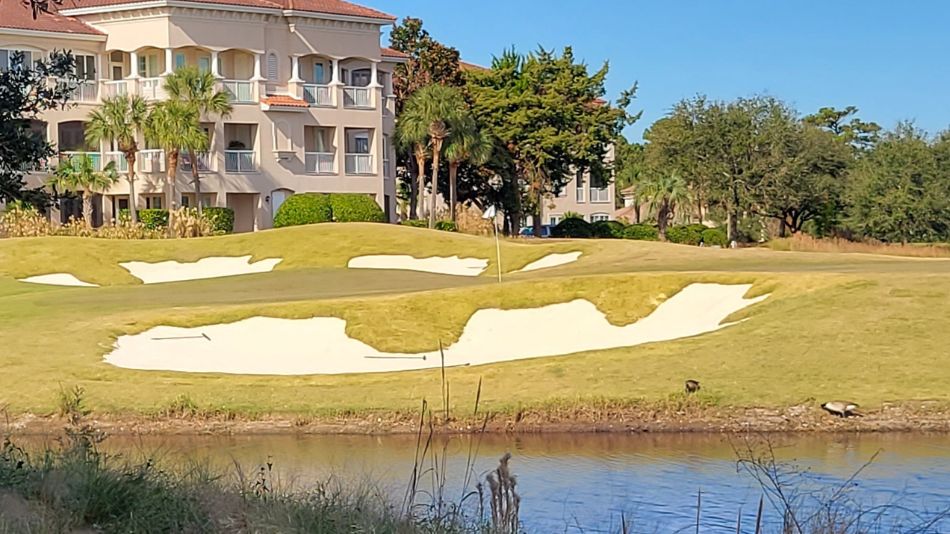 The Grande Dunes Resort Club in Myrtle Beach, South Carolina was able to quickly reopen its course shortly after Hurricane Ian thanks to improvements to bunker infrastructure introduced during a renovation by golf course architect John Harvey.

“We got five inches of rain from Ian,” course superintendent Kevin Pryzblski said. “We opened at eleven o’clock the next morning; we had very little sand movement except in a few areas where the faces were very steep.

During the refurbishment, the bunkers were returned to their original shape and new Capillary Concrete liners were installed to improve their condition and playability, particularly following severe weather events.

“The bunkers were pretty lace-edged when they were built, but took on more circular shapes as a result of two decades of edging,” Pryzblski said. “They are quite stiff, with high lips, and they tend to get heavily contaminated with native soil after heavy rains. Our site is quite sandy, but still, getting them back to playing condition after the weather took a lot of time and labor.

Harvey also restored the greens to their original dimensions, reclaiming nearly 40,000 square feet of putting surface, and they were returfed with ultradwarf TifEagle Bermuda shorts.

The fairways were also extended, totaling eight acres, in an effort to improve playability.

Harvey, who worked with Roger Rulewich on the original design and construction of the course in 2001, and Pennsylvania-based contractor Henderson & Company completed the renovation project in four months.

“Grande Dunes will once again play as originally intended, challenging golfers with bold green complexes and the strategic decisions that make the game so enjoyable,” said Steve Mays, president of Founders Group International, which owns and operates 21 course at Myrtle Beach. Region. The company has undertaken renovation projects at Pine Lakes, Aberdeen Country Club, River Hills, Tradition Club and PineHills and Palmetto courses over the past four years.