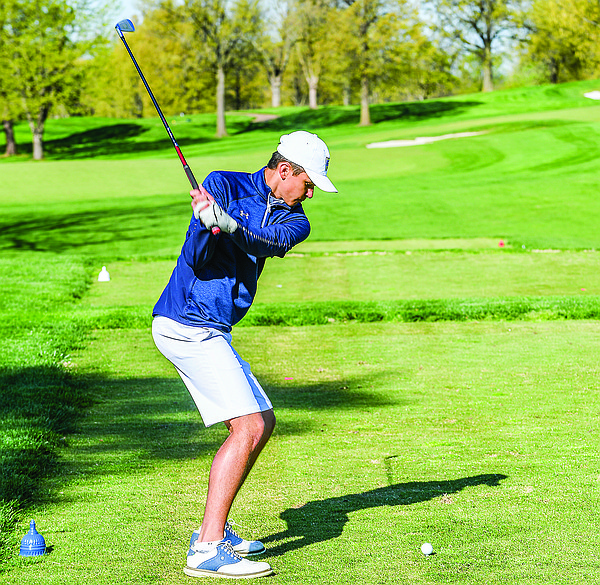 The Helias Crusaders took four golfers to the state tournament last year and won a trophy.

They are looking to use the same formula this year.

“They know every score will count,” Helias coach Jay Higgins said as the Crusaders prepared for the two-day Class 5 State Tournament today and Tuesday at Dalhousie Golf Club in Cape Girardeau. . “I think that will grind them all for the 18 holes.”

The Crusaders advanced in the state by winning their ninth straight district tournament title last Monday.

“It was a great race,” Higgins said. “It was the No. 1 goal every season to win the district title.”

The top two teams in the district advance their top four golfers in the state, with the next top 12 earning qualifying spots. Helias’ fifth golfer fell outside this cut line.

Helias traveled to Cape Girardeau on Saturday to run the course before playing a practice round on Sunday.

The Crusaders have experience at Dalhousie this season, finishing second behind Nixa in a tournament hosted by Cape Girardeau Notre Dame.

“It’s tight with fast greens,” Higgins said. “There aren’t a lot of out of bounds, but there is a lot of tall grass that is a hazard.

“You can score on the course if you hit the ball straight and play smart. You need to leave the driver in the bag a lot and hit more irons off the tee. That’s what I call “boring golf”, you just have to be patient. Seeing the route before, it will be fine.

Davis Linhardt, a junior, led Helias in the districts in tying for second place with a 5 of 77 at Adams Pointe Golf Club in Blue Springs.

“Davis has been a rock for us,” Linhardt said. “His game has improved, his course management has improved, he has really become the leader of the team.

“We can always count on him to post a good score.”

Miles Vollet, a junior, is tied for seventh in the district with an 80.

“I’ve been surprised by Miles all year,” Higgins said. “He had a bad 18-hole tournament, but other than that we’ve counted his score every time this season.”

Vollett did not play as a freshman and was part of the JV as a sophomore before entering the season as the No. 5 golfer in varsity. Higgins said Vollet was consistent with scores in the 70s and 80s.

Archer Schnieders, a sophomore, is tied for ninth with an 81 in districts.

“He hits the ball really well, it just doesn’t show up in his scores all the time,” Higgins said.

Schnieders has had a growth spurt this season.

“People don’t realize you have to change your swing, it’s been hard on him, but there’s not a kid I would trade him for right now,” Higgins said.

Burke Bauer, another sophomore, shot an 83 in the districts to tie 18th for the Crusaders.

“He’s been steady for us,” Higgins said. “We know what we’re going to get out of Burke.”

There isn’t a senior among the Helias qualifiers.

“I’m excited for them, because if we can do well with them, the future looks very fun,” Higgins said.

Helias, who has shot a minimum of 293 in a tournament this season, aims to post a team score of 620 on Tuesday.

“If we can do that, we’ll be there,” Higgins said. “I’ll take this right now and walk away.”

This is Helias’ second season in Class 5 after being kicked out of Class 3 due to the MSHSAA Championship Factor.

“I didn’t realize what a difference that was,” Higgins said. “I knew it was in football, baseball and basketball, but it’s also in golf. The amount of talent across the state at major schools is amazing and fun to watch.

Chaminade returns to defend his Class 5 title. Other contenders for the tag team title include CBC, Priory and De Smet.