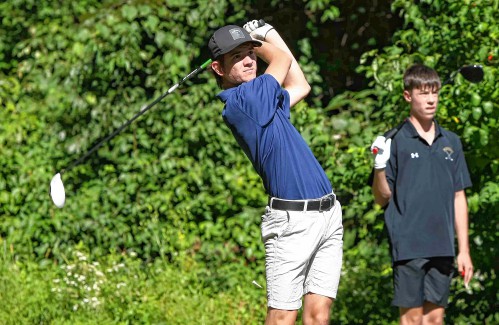 The Northampton golf team almost had a clean sweep against Amherst on Thursday, earning a 23½–½ victory at Amherst Golf Club.

Galen Fowles maintained his strong streak in a match against Amherst star Piet Hartman. Fowles won the game 3½-½, shooting a 34 to Hartman’s 36.

Two other golfers shot under 40 for the Blue Devils – Reilly Fowles won their match 4-0 with a 37 while teammate Jack Mattison-Gulotta scored a 38. Ben O’Connor also scored a 40 for Northampton, winning their match 4-0.

Pioneer 17, Hopkins 7 – Hopkins’ Taylor Barry (43) won a close match against Pioneer’s Ben Werner (44) in Game 1, but Hopkins fell to 0-2 with a loss to Pioneer at Holyoke Country Club on Thursday.

Belchertown’s Riley Breen and South Hadley’s Ryan McGregor tied for the afternoon’s lowest score, each shooting a 39 to tie in Game 1. Henry Poissant shot a 41 and Michael Murray, Brady Perkins and Cal Orzech all shot 42 for Belchertown.

Cam Skiffington (46) and Addy Wood (51) each scored a pair of points for the Redhawks in the loss.