Morikawa can move up to world No. 1 with a win in Abu Dhabi this week, provided Jon Rahm finishes outside the PGA Tour top seven at the American Express – watch both events live from Thursday on Sky Sports Golf

Collin Morikawa insists he has moved on from his Hero World Challenge disappointment as he returns to the DP World Tour with a chance to move up to world No. 1 at the HSBC Abu Dhabi Championship.

Morikawa missed the chance to take the lead after failing to convert his five-stroke lead at the final round in the Bahamas last month. The two-time major winner finished tied for fifth and achieved the same result at the Sentry Tournament of Champions.

The 24-year-old’s appearance on the DP World Tour is his first since winning the Tour’s Order of Merit last season, with Morikawa able to move up to world No. 1 with a win if Jon Rahm finishes worse than tied for seventh on the PGA Tour at the American Express Tournament in California.

Nick Dougherty and Andrew Coltart review the best of the action from the final round of the European Tour DP World Tour Championship.

Nick Dougherty and Andrew Coltart review the best of the action from the final round of the European Tour DP World Tour Championship.

“The frustration goes away,” Morikawa said of his disappointment in the Bahamas. “If I was still frustrated about it, I couldn’t play this tournament to the best of my abilities. I was frustrated for a few days or a day, and you get over it and then I’m motivated.

“I get over things pretty easily, and I think for me that’s the motivation, right. How can I learn from these bad events and how can I, you know, if I miss a cut or whatever, how can I not have this happen again. 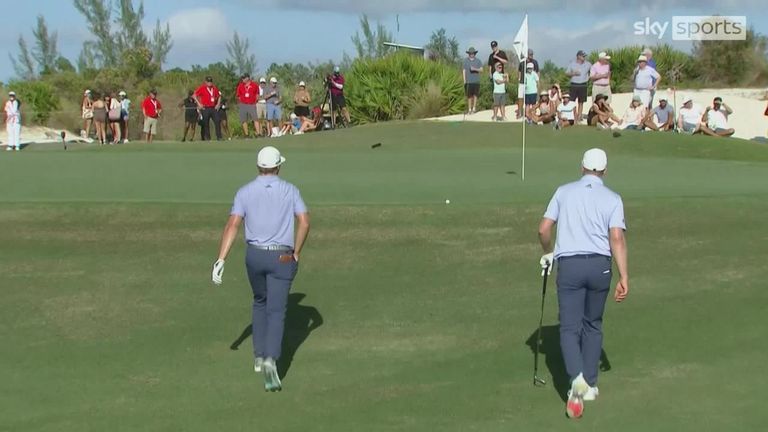 A look back at the best of the action in a thrilling final at the Hero World Challenge in the Bahamas, where Collin Morikawa missed out on world No. 1

A look back at the best of the action in a thrilling final at the Hero World Challenge in the Bahamas, where Collin Morikawa missed out on world No. 1

“But you know, I don’t see it as ups and downs. I think that’s the wrong way for me to put it in my head. For me, it’s just that you have a good week, you have a bad week, things happen and that’s what we do. We play half the weeks of the year. There are going to be bad days.

“But it’s just about dealing with how bad it gets and how bad it could get, and obviously what happened in the Bahamas, you know, we talked about that. It wasn’t great. But for me, it’s learning those things, and making sure it never happens again.”

Fleetwood: I found it difficult in 2021

Tommy Fleetwood has admitted he hasn’t played well enough in a winless 2021 and is keen to put a frustrating year behind him when he begins his season at the HSBC Championship Abu Dhabi.

The Englishman has struggled for consistency in a difficult campaign, recording just six world top 10 finishes in 26 starts and returning just one point from three matches in Europe’s record Ryder Cup defeat at Whistling Straits.

Fleetwood is a two-time Abu Dhabi winner after successfully defending his title in 2018, although the world No.41 enters the tournament at Yas Links – a new venue for the Rolex Series event – without a win since the Nedbank Golf Challenge 2019.

“I didn’t play well enough,” Fleetwood said of last year’s performance. “I was very rarely at a tournament where I felt very confident with my game or where all parts of my game are on the line. I’ve lacked rhythm throughout the year.

“I think I had a year where I found it difficult, like I said, I never got my swing. I struggled off the tee, which for me has always been a huge source of trust and where I’ve broken courses and built scores in the past.

“I think when I was missing that, I found the game particularly difficult. I think when I look back on the year, there were actually parts and areas of my game that were stronger than I thought. was thinking, which is heartwarming, and just touched on the areas I wasn’t as good at.

“The standard keeps going up, and if you kind of go down it’s worse than it’s a lot and it’s easy to try to look for that, which is the same in all sports. Just search for that magic answer on a daily and weekly basis, and I think if you consistently work on the right things, and do it well enough, then you’ll get to where you want to be. But last year has been difficult.

Watch the HSBC Abu Dhabi Championship all week long live on Sky Sports. Live coverage begins with the featured bands Thursday from 3.30am on Sky Sports Golf, before full coverage from 7am.