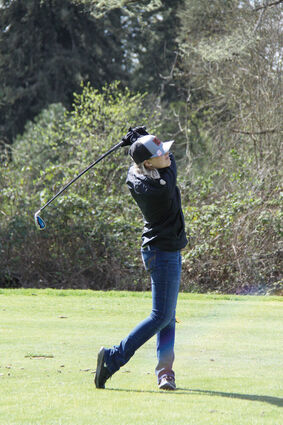 The Sweet Home boys shot their best game of golf this season on Monday, April 25 at the Oregon Golf Association course in Woodburn.

The Huskies finished with a 395, seventh in a heavy-hitter group that includes some teams likely to compete for the state title.

Marist finished with 314, four strokes ahead of Banks, who finished 318 behind individual medalist Aaron Brown’s 69, three under.

Christian Guerrero was Marist’s lowest man with a 74, but the Spartan’s front four all shot 82 or less. ‘

Ty Beyer finished with a 75 for Woodburn.

Stayton rounded out the team finishers with a 442.

For Sweet Home, Morgan Sands led with a 94, with Carsen Perry second (99), followed by Chet Garrett and Joseph Hiemenz, both with 101, and rookie Easton Perry fifth with 119.

In women’s golf, also at the OGA on Monday, Bailey Womack finished ninth out of 26 players in varsity competition with a 108.