Is it time to abandon the green committees? 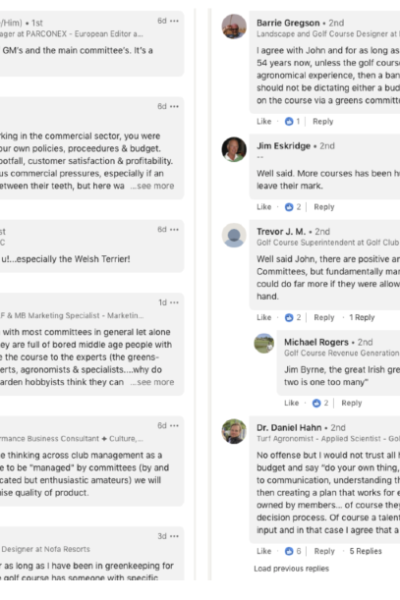 A comment from a chief greenkeeper who is also a co-owner of a golf club has sparked a major debate over whether golf clubs should have greens committees.

John Rowbottom, the chief greenkeeper at Woolley Park Golf Club in Yorkshire, who is also a member of the family that runs the club, was interviewed by GreenKeeping magazine how it would improve the green space maintenance industry.

Rowbottom said: “By stamping out the greens committees. Golf clubs all over the country employ qualified people with the knowledge and qualifications to take care of a fine turf. The biggest problem in the industry is that these qualified people are often hampered by a group of individuals who know nothing about turf. Let the greenkeepers make decisions about their golf course.

Many golf clubs in the UK have greens committees where volunteer members who play the course regularly decide on its maintenance and improvement policies. They usually operate in tandem with their club’s greenkeepers but are often not as skilled as them, for example in agronomy.

This was posted on the the magazine’s LinkedIn page and received hundreds of likes and dozens of comments, mostly from the golf and green space maintenance industry.

The vast majority of comments agreed with Rowbottom.

Some other chief greenkeepers thanked him for speaking up and gave examples of how the courses they had worked on had been affected by not being given full authority for their maintenance. Golf course designer Barrie Gregson said: ‘I agree with John and since I have been in the maintenance of green spaces for 54 years now, unless the golf course has something one with specific agronomic experience, then neither should a bank manager or teacher dictate a budget, or direct greenkeeping on the course via a greens committee.

Golf course manager Paul Copsey added: “That’s what was great about working in the commercial sector, you were mainly in control of your own policies, procedures and budgets. The results were based on attendance, customer satisfaction and profitability. Ultimately, we come back to the governance issues of private clubs. Some are very poor, while others may be well-meaning, but the club is hijacked by an unscrupulous individual and his cronies. By the time the rest of the good people at the club find out and put right the money spent disaster, the loss of their best staff and managers, a wrecked course, a struggling clubhouse and business, it may be too late. Golf courses are so much better when not run by golfers. It’s like letting the kids run a candy store.

Others in the industry agreed with this point on governance.

Doug Poole, CEO of the British Golf Federation, wrote: “I’ve seen it all. It must be difficult for greenkeepers to follow the instructions of certain committees. Former Golf Club Manager Jerry Kilby CCM added: “It is true that in many member-owned golf clubs, unqualified members try to tell qualified and talented greenkeepers how to do their job. However, this is not the case in all member-owned clubs. Many of them are successful, but still too many of them have a bad governance model. The industry needs to take the issue of governance seriously and explain to individual clubs the weaknesses and problems caused by a poor governance structure.

Others said that although a greens committee can be a problem, if it is a good committee it should benefit the club.

PGA of America Life Member Tim Wilkins said: “A wise committee of greens will make sure to hire the best candidate available…then…give that person the responsibility, the tools, the budget and the respect to let her run the department. , responding to the committee. The committee is the link between the club and the members. The same goes for the head professional and club manager. Micromanagement does not motivate a thoroughbred…and is fear-based management. Large organizations know this to be true.

And some responded that committees should play a role in maintaining a golf course, because it is their golf course. Matt Kimball, Regional Superintendent at Troon Golf Management, said: “It’s not ‘your’ course. You are the help. The members will have their say and given that it is their course, it is understandable. It is your job to find a way to educate without offending these members. Earn their trust.

And turf agronomist Dr Daniel Hahn said it could be risky to give all head gardeners the freedom to do whatever they want. “It all comes down to communication, understanding the club’s situation and vision, and then creating a plan that works for everyone. A members club belongs to the members…of course they want to be included in the decision-making process,” he wrote.