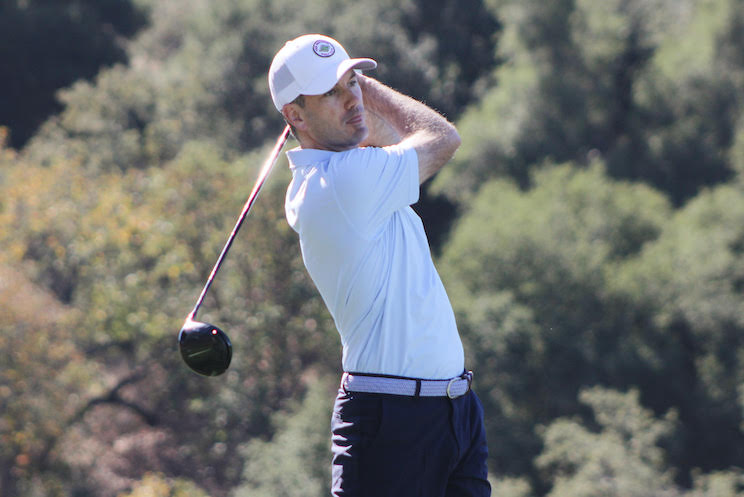 Michael Jensen is in position to repeat at the Stocker Cup on his 30th birthday. (Conner Penfold/AmateurGolf.com)

This time last year, Michael Jensen was scoring one of the biggest wins of his recently revived amateur career. Meanwhile, Joe Neuheisel was competing for Boise State University in his final year of eligibility.

On Saturday at The Preserve, the pair will come face to face in the final group of the 30th edition of the Stocker Cup.

Jensen and Neuheisel shot identical scores in the first and second rounds, carding 67 and 68 to lead the 48-man mid-amateur invitational field heading into Saturday’s conclusion. Jensen, of San Francisco, Calif., made the par-5 8th twice to account for nearly half of his red figures. Neuheisel, of Scottsdale, Ariz., didn’t record an eagle but ran a bogey-free run Thursday in his first competitive appearance at The Preserve.

“You can end up on the wrong side of some holes here,” Jensen said. “I haven’t put myself in bad positions yet and made quite a few putts.”

The comparisons continue, as Jensen also entered last year’s final round with a share of the lead before defeating Jason Anthony in a sudden-death knockout.

While Anthony had nearly a decade of experience on Tom Fazio’s heralded design spread across the Santa Lucia Reserve, Neuheisel provides fresh meat to the mid-amateur circuit.

The son of former college football coach and current CBS Sports analyst Rick Neuheisel, Joe turned 25 in January and got his newly tagged mid-amateur feet wet in June at the Los Angeles Country Club. He finished tied for sixth at the George C. Thomas Invitational, where Jensen finished second after falling in the playoffs to Evan Beck. 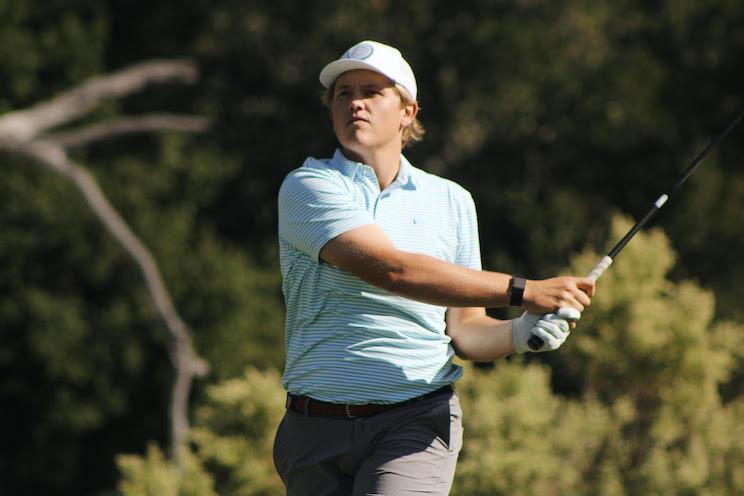 Joe Neuheisel teeed off at the par-4 16th in Friday’s second round. (Conner Penfold/AmateurGolf.com)

“So far I’ve played LACC and The Preserve,” Neuheisel said. “It’s too good to be true.”

The highlight of Neuheisel’s second round came up front when a 60-foot putt fell for a birdie. Where most would settle for a well-offset two-putt, Neuheisel channeled 1990 Hale Irwin and happily ran around the green with his putter up in celebration.

“Those two rounds I hit the ball off the tee pretty well, so I was in the fairway,” Neuheisel said. “And once you’re in the fairway, because of where they put those pins, you end up in places where you can definitely make two putts.”

Tied for third place are Brian Blanchard of Scottsdale, Arizona and Geoff Gonzalez of San Jose, Calif. Blanchard was hoping for redemption in the form of a final match with Neuheisel. The pair endured a hard-fought 25-hole match in that summer’s Arizona Amateur Round of 16, which Neuheisel would go on to win.

Gonzalez’s Friday ’67, tied for the day’s low score, puts him within striking distance on his first go-around at The Preserve.

The Stocker Cup was founded in 1991 to honor the memory of Peter Stocker. Peter and his partners Bill Harlan and John Montgomery founded the Pacific Union Company of San Francisco, a very successful real estate development company. The company launched the development of The Santa Lucia Preserve, a 20,000-acre residential and golf community located above Carmel. Cruising the winding road to the centerpiece of The Preserve – the Top 100 rated golf course – has been described as “driving through a California postcard”. The Stocker Cup was played from 1991 to 1999 at Pebble Beach and its surrounding golf courses, before moving to the Preserve GC designed by Tom Fazio and Sandy Tatum In the words of former USGA President Tatum: “Peter Stocker was the quintessential amateur golfer. golf with passion. He would have loved this tournament.

FORMAT:
Individual 54-hole competition with a concurrent best-ball event, similar to the AT&T Pebble Beach Pro-Am. Invited mid-amateur players are either paired with a single digit amateur or can nominate their own partner who will be introduced and invited by the committee.