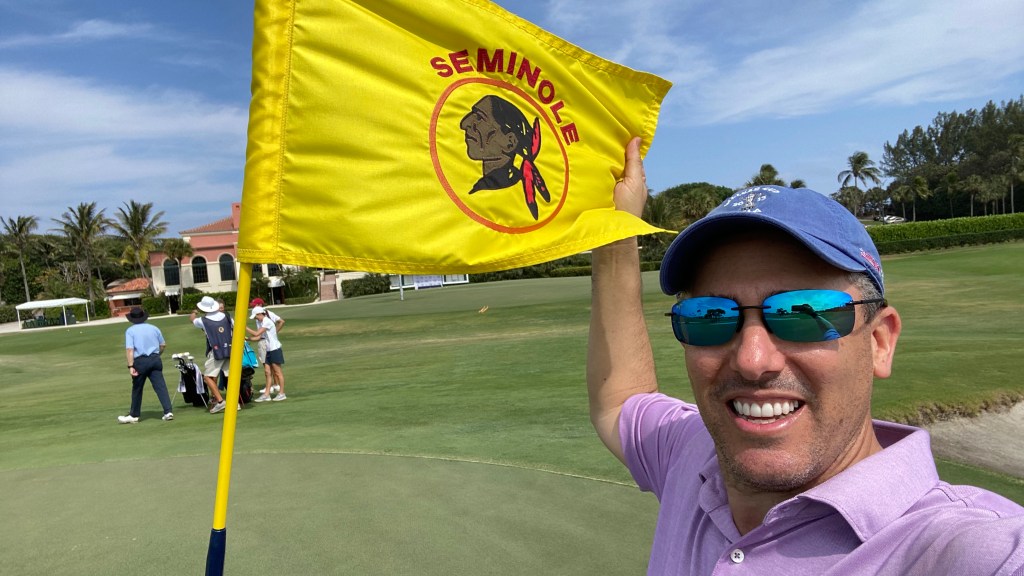 The highlight of my year was a WD.

I had to retire from players’ championship coverage the morning of the first round when my wife went into labor. Norah Elayne Schupak said hello to the world at 5:39 a.m. on March 12, and she’s previously competed in the Valspar Championship, watched Phil Mickelson win the PGA Championship in Kiawah, and made his first ferry ride to Liberty National for the Northern Trust. We have already applied for her passport so she can cross the pond for her first British Open at Old Course in July.

The nine months since I missed seeing Justin Thomas cut out TPC Sawgrass in person has been a whirlwind and it’s hard to remember my life before changing diapers. But there were a few moments during the golf season that were unforgettable. Let’s start with the Golf Channel set at the Waste Management Phoenix Open where I interviewed Brandel Chamblee and asked him the following question: who comes back first in the winner’s circle: Justin Rose, Jason Day or Jordan Spieth?

Chamblee’s response included this bulletin board material for The Golden Child: “Spieth is heading for oblivion,” Chamblee said. “It’s hard to turn around with this ship. “

“On the road to oblivion” were words that nearly knocked me off my chair, so I asked a follow-up question which Chamblee elaborated on. You can read his answer and the full Q&A here. A few hours later, Spieth took the start and shot the first of a pair of 67s. But it was Saturday’s magic third round 61 in the desert which was my favorite round of the year and the ultimate middle finger for Chamblee. It was a time machine moment in a hot tub back in the days when Jordan apparently couldn’t do anything wrong. Limited fans were in attendance, but the cheers as he emptied a pair of over 30-foot birdie putts at 16 and 17 made the hair stand on end on the back of my neck.

Spieth didn’t close the deal on Sunday, but he had presented real evidence that he was recovering like a Phoenix in Phoenix. I knew then it was only a matter of time before he ended his winless drought (and he did in early April at the Valero Texas Open). The PGA Tour is simply a better product with Jordan doing it again with Jordan.

At the end of April, I was one of the few journalists who stayed to speak to Phil Mickelson after missing the cup Friday night at the Valspar Championship. He complained of a lack of concentration and criticized the cell phones for ringing and the cameramen for moving for his inability to concentrate. His frustration was visible and he had more questions than answers about his game. Less than a week later he dismissed 64 to lead the Wells Fargo Championship, but it turned out to be a mirage while he was fell to 69e-placing the finish. So, of course, he won the PGA Championship at Kiawah the following week.

Golf, what a crazy game! I was standing not too far from Lefty when the Photo of the Year was taken (pictured above) and was sitting on the green when he pierced his bunker shot for a birdie in the fifth. I wondered if that signature hit came too early in the round, but Mickelson seemed to gain confidence and fans demanded an unlikely win, his sixth major, at 50.

It was the first tournament that had a pre-COVID vibe and the fan swarm was most evident at 18, where the PGA lost control of the situation and it looked like Mickelson and Brooks Koepka were in the middle of it. a mosh pit at a concert.

The other lasting memory was more personal and revolved around the Walker Cup. Media day included the chance for some of us, miserable inkblots, to play at Seminole Golf Club. Shout out to my wife for granting me the pass to go there 17 days after our daughter was born. Justin Thomas warmed up not far from me, before going out with his dad, Mike, and Rory McIlroy’s dad, Gerry, who fully appreciates his membership, I’m told. I don’t blame him. Seminole is a course that lives up to the hype. I got to play with my dad, Golfweek colleague Julie Williams and reigning American amateur champion at the time Tyler Strafici. Helluva day despite the three jacks.

Adam Schupak takes a selfie with his childhood pal Ryan Brudner at the 48th Walker Cup.

I’m almost embarrassed to admit it but the 48e The Walker Cup was my first. Put it on your list and try to get there soon with this next line of stronger-than-onion sites: The Old Course in 2023, Cypress Point in 2025, Bandon Dunes in 2029, and Oakmont in 2033. I already have RSVP ‘ed for media days! You can walk the middle of the fairway of these golf cathedrals alongside the competitors, there is nothing better. And you never know who you’ll meet there. I literally ran into my childhood golf rival on Seminole’s 13e hole. I hadn’t seen him for something like 25 years, but we resumed as if time had stood still. We hiked a few holes together, showing pictures of our families and remembering. I will never forget one thing he said to me: “I had a feeling I could see you here. “

That’s what I love about golf: it brings people together. And I love the fact that all these years later I’m still so passionate about this game and that I can still play a small but substantial role as one of its storytellers. Here are the pars and birdies only in the new year.