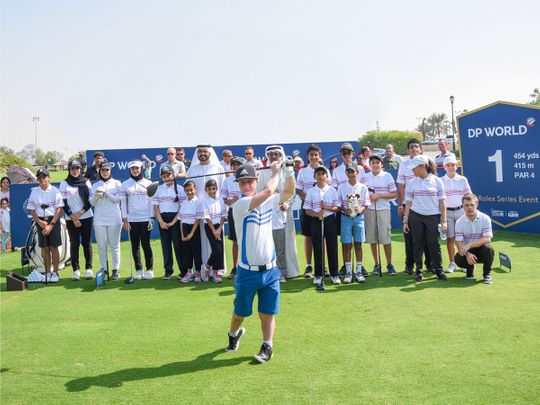 The Irishman is one of eight leading disabled golfers to take part and last year won the EDGA final in Dubai, also held alongside the DP World Tour season-ending event.

Currently ranked second in the World Rankings of Golfers with Disabilities (WR4GD), Lawlor has been in fine form this year on the G4D Tour, with three second-place finishes to his name. He now hopes to end the year in style and clinch a victory that eluded him on the Tour in 2022.

“I’m really excited to come back to Jumeriah,” Lawlor said. “Last year was fantastic. hitting that shot over 17 from eight feet and then sinking the putt was a highlight. Then going to 18 and winning the event is something that will stick in my memory for a long time and give me great confidence for this year.

“I’ve played some really good golf this year but just couldn’t get over the line with three second place finishes. It would be nice to end the year well. I really enjoyed playing on the G4D Tour “As we can see from the scoring, the standard has improved a lot. The rankings are much more grouped and there are some really, really good players coming into the game.”

Players will depart at 07:00 from Jumeirah Golf Estates and live scores will be available on the DP World Tour website and app.

So far this season, six events have taken place on the G4D Tour, including three in the UK and one tournament each in Germany, Ireland and Spain. England’s Kipp Popert has been in imperious form, with four wins. He was joined in the winner’s circle by compatriot Mike Browne and Italian Tommaso Perrino.

Chris Biggins from the United States, Juan Postigo Arce from Spain, Kurtis Barkley from Canada and Rasmus Lia from Sweden complete the field.

“Working with the DP World Tour and the EDGA (European Disabled Golf Association) this year has really put golf for the disabled on a platform and it’s here to stay,” added Lawlor. “We show people that despite the challenges we face, anything is possible.

“We are really making the sport elite. We are not just disabled golfers, we are athletes who compete at a high level. It is important for us to go out and show people that we are the best players and that we compete with the same emotions as any professional golfer.

“For the Tour to have an impact, people have to see what we are doing there. There will be great crowds in Dubai to see what we can do, and that’s a huge thing for us.