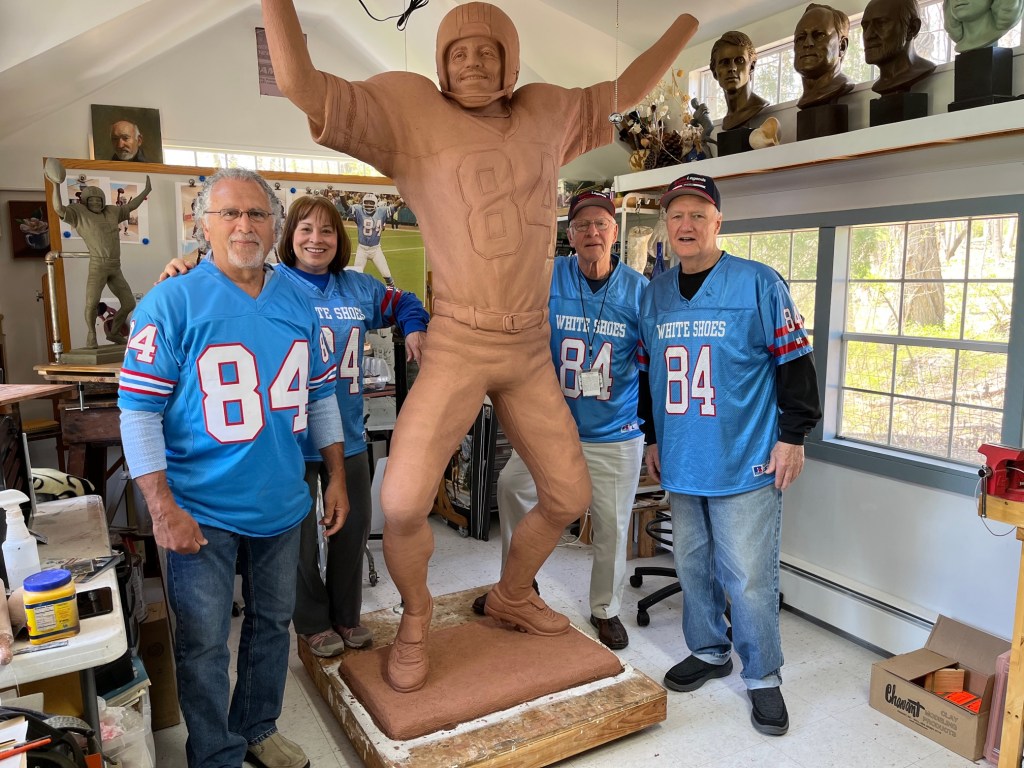 The statue, which is expected to adorn the Marcus Hook Community Center property this fall, is nearing completion.

By the looks of the models, sculptor Jennifer Frudakis Petry not only puts her considerable talent to play with clay and wax models that will precede a planned seven-foot bronze artwork, but she also captures the spirit of his last topic. .

When the statue is unveiled at a ceremony scheduled for Oct. 15, Marcus Hook’s own Billy “White Shoes” Johnson could be seen in a familiar pose: perfecting a funky touchdown dance.

Now 70, he may not be above him to throw himself into his old standard celebratory “funky chicken,” an entertaining staple of NFL highlights in the 1970s that Johnson practiced after scoring touchdowns as a receiver and one of the best returning men in the NFL. the story.

“It’s in the final stages of planning,” longtime local sports impresario and former Johnson High school teammate Jim “Boog” Laird said Sunday. “We just need an extra boost to get him over the top.”

Laird was referring to an ongoing fundraising effort to honor Johnson, a Chichester High and Widener legend, with the statue. The sculpting artist is Frudakis Petry, who has cast artwork of Phillies and Flyers Hall of Famers, as well as Delco Hall of Fame athletes such as Emlen Tunnel and Fredia Gibbs.

Although in a different location, Johnson’s statue will be the second such marker in the borough of Marcus Hook, the other being the famous Mickey Vernon native, erected in 2003 and the centerpiece of a park that now bears his name.

Some heavyweights have helped fundraising efforts near his $100,000 goal, including the family foundation of Atlanta Falcons owner Arthur M. Blank and a matching contribution from the Tennessee Titans. Johnson was a fixture during his NFL career with the Houston Oilers — the franchise that moved to Tennessee to become the Titans — and the Falcons.

Donations have also been made by local sports figures such as former Eagles coach Dick Vermeil and Bill Manlove, who had the pleasure of coaching Johnson during the early years of his long tenure at PMC and Widener.

If the goal of building the statue is indeed achieved, the plan is to hold a celebration this Saturday in mid-October, including a presentation breakfast with Johnson (where donors of $100 or more are invited) and the unveiling of the statue afterwards.

For a perfect topper, Chichester’s return game could be moved to this afternoon.

“The shoes are really happy,” Laird said of his longtime friend Johnson. “He approved the model.”

However, this endorsement of the topic apparently comes with a caveat.

“It’s the magic touch,” Laird said. “A sculptor’s challenge – he wants the cleats (on the statue) to be white. They will trigger it just fine.

Donations for the statue can be made through PayPal by clicking the link on the Delaware County Sports Museum’s webpage at delcosportsmuseum.org.

The awards provide full tuition and housing scholarships to golf caddies. A partnership between the Western Golf Association’s Evans Scholars Foundation and the Golf Association of Philadelphia’s J. Wood Platt Caddy Scholarship Trust, recipients excel in four areas: their track record as caddies, their academics, their demonstrated financial need and their exceptional character.

The Philadelphia selection meeting was the sixteenth of more than 20 meetings scheduled by the Evans Scholars Foundation this spring.

Mutz, a hometown boy from Swarthmore and a graduate of Strath Haven, is the first Garnet player to earn Centennial Conference Player of the Year status. The third baseman led the conference in batting average (.442) and hitting average (68), and was ranked second in runs scored (50), triples (6) and on-base percentage (. 506).