Looking for cheap golf in Utah? Here’s how to play a course for $9 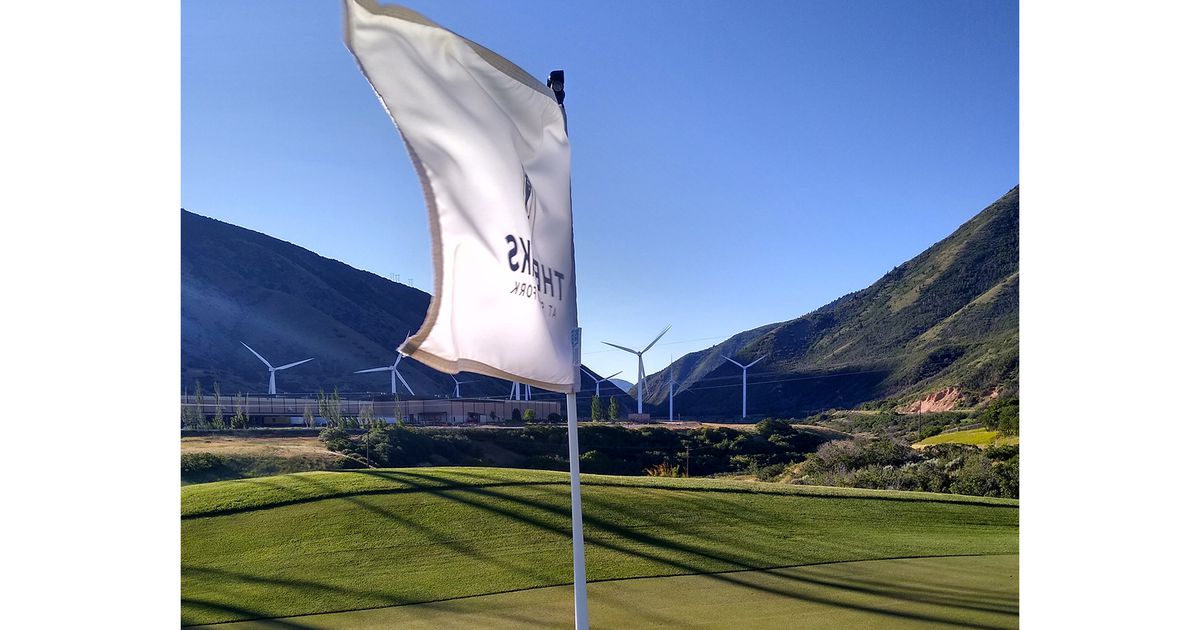 Dale Hadley speaks with great reverence and poetry of his regular morning rounds at Ogden’s historic El Monte Golf Course, with the sun rising near Ben Lomond Peak and shining on the stone pavilion perched high above the ninth green.

“At around 9 a.m. the winds died down and the sun came out, with a nice breeze,” Hadley said. “Just perfect for a round of golf.”

Imagine him pausing, before this ironic conclusion: “But by then, we’re done.”

That’s because Hadley, who tries to visit El Monte twice a week with her brother, Craig, and son, John, enjoys playing in the first band of the day. Their preference is mostly down to the challenge presented by the blowing wind of Ogden Canyon and how that keeps the course from getting too crowded – but it’s also partly down to the financial rewards.

El Monte and The Oaks at Spanish Fork, a similarly positioned course at the mouth of Spanish Fork Canyon – and where, in case anyone doubted the potential power of the wind, nine 280-foot-tall turbines stand profile beyond the 10th green – offer “wind rates” for golfers who leave before 9:00 a.m.

It may not be an original phrase, but golf course architect Robert Trent Jones Jr. popularized the phrase “invisible danger” for wind as a factor in hole design. It’s a good description of how the wind comes into play in Ogden and Spanish Fork, practically and psychologically. Tax too.

City administrators in these cities believe they need to urge golfers to experience the canyon winds that are also familiar to patrons of courses such as Bonneville GC in Salt Lake City and Logan Country Club.

Some strategy is involved here. Booking the last tee time before 9am at Spanish Fork or Ogden dramatically reduces the percentage of holes played in the toughest conditions. This matters especially for 18-hole golfers at The Oaks, where every minute they can put off the battle helps No. 10, a par 5 that climbs to the canyon and is fully exposed to the wind, with problems on both sides. .

There may not be a more intimidating tee shot anywhere, which is why I was amazed to see two trolleys of players heading down the tunnel towards No 10 to start their day just after 6 morning hours in mid-June. It evoked a memory from 30 years ago. After signing up to play the back nine, I threw a shot that practically came back over my head, so I immediately turned and drove across the parking lot and around the clubhouse until at No. 1 and took a westerly direction, with the wind.

Again, it helps to learn how to properly hit shots that cross the wind and in the conditioning that comes with playing in that setting.

Jordan Rogers, who coaches the Spanish Fork High School men’s golf team, deliberately schedules a 6:30 a.m. tee time for one of his test rounds in August. The canyon wind will “definitely separate” some Don pretenders from the real players, he said. “I eliminated the less serious children by playing early. On several occasions the boys just didn’t show up for the second day of practice, and I have to believe the ‘tornado’ winds played a part.

Rogers, whose team finished second to powerhouse Skyline in last October’s Class 5A State Tournament at The Oaks, added: “I’ve had players tell me they’re happy when we are greeted by harsh conditions as we arrive at a high school meet. Funny thing is, I think they really mean it.

The survival aspect, while being hardened by the wind, is part of what draws Hadley, 72, and her son and brother to their twice-weekly walks in El Monte, as much as the $9 fare. At this time of year there is also a warm aspect to play in the wind, with jackets compulsory.

In spring and fall (and, if possible, winter), Hadleys are known to wear woolen hats and gloves when playing in extreme cold, as the wind prevents frost from forming. The absence of dew at these courses is indeed striking; at The Oaks, the freshly mown greens are firm and fast, even before the sun moves across the course.

Unlike The Oaks layout, where three of the first four holes play downwind, El Monte’s opening hole faces into the canyon. The long par-5 comes with the added challenge of two huge poplar trees in the middle of the fairway.

Compromise is a friendly end. Numbers 8 and 9 play with the wind, towards the stone clubhouse that is approaching a century old. Hadley calls it “truly my favorite finishing hole of any course I’ve played…reminds me of the historic nature of the game.”

The Hadleys also love the pace of the early mornings, when they sometimes complete nine holes and realize they’ve had the course to themselves.

And even if the wind is relentless early in the morning, the two courses are designed with variety. Once you get past the challenging course of No. 10, three subsequent par 4s deliver downhill and downwind tee shots that are fun to throw on holes the late Billy Casper designed with options at the spirit.

Casper, a legendary golfer with 51 PGA Tour wins, would probably forgive us for choosing to wait out the morning wind. His best chance of winning the British Open was lost in 1968 at Carnoustie in Scotland, where the final round conditions became so difficult that Gary Player’s 73 was good enough to overtake Casper’s lead.

A sample of discounts offered by public golf courses in Utah:

• Wind Rate: Starting before 9 am, $9 to walk nine holes at El Monte GC in Ogden; $15 per nine holes at The Oaks at Spanish Fork (essentially, a free cart).

• Summer Rates: Approximately 40% off green fees from June to September on the four courses operated by St. George City.

• Twilight Rates: $500 season pass to play nine holes weekdays after 4 p.m. at Talons Cove GC in Saratoga Springs; $36 including cart for 18 holes in October at Homestead Resort & GC in Midway.

• Junior rates: $5 or less for nine holes on more than 30 courses, with a Youth on Course membership.