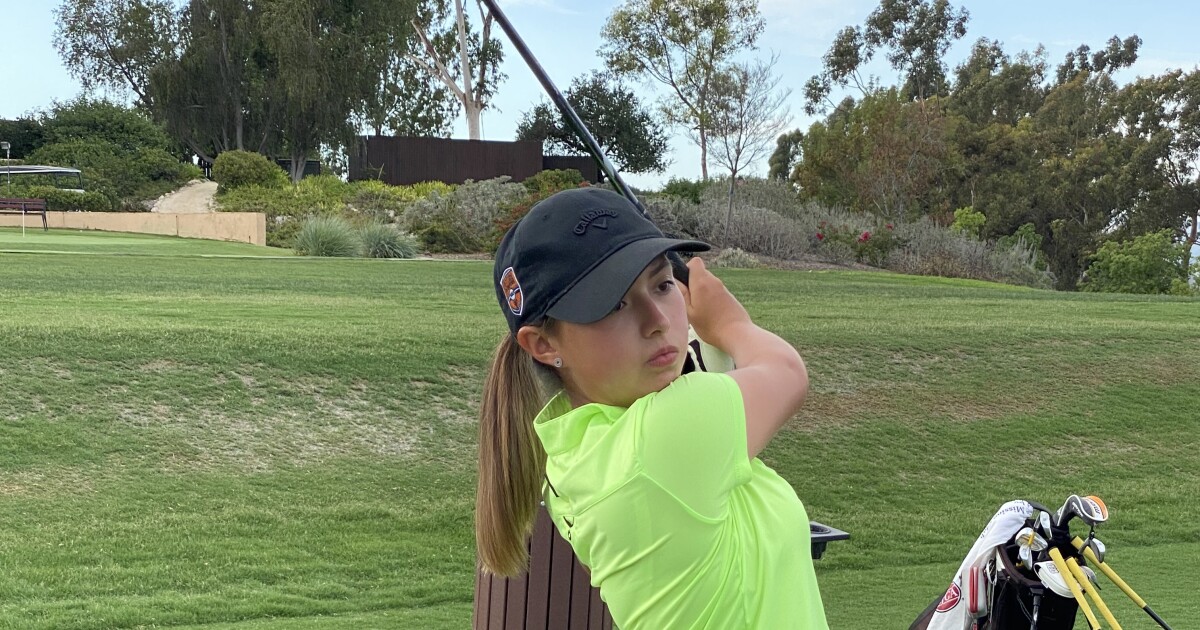 When Sofia Gomez-Inowe was 8 years old, she attended a summer camp with tennis and golf.

Her instructor took her aside and told her she had a lot of potential – in tennis.

“It was like Golf 101,” said Catholic junior Mater Dei. “By then I was pretty much fully committed to golf. I realized, ‘Hey, I like that.’ I can’t really say that I miss tennis.

Instead, Gomez-Inowe, who lives in Rosarito Beach, gets up at 4:30 a.m. to cross the border each morning, pursuing the increasingly realistic dream of winning a scholarship to play college-level golf in the United States. United.

Or that she placed 17e in the overall San Diego Section Championships a year ago to Bernardo Heights and Omni La Costa.

Or that she shot a 4 of 77 to finish tied for 41st in the SCGA SoCal Regional at Brookside Golf Club in the shadow of the Rose Bowl in Pasadena.

“What makes Sofia special is that she is very stable,” said Crusaders head coach Alex Valenzuela, who is now entering his 12e year.

“She hits the ball straight and if she blows a hole she stays calm. She’s strong mentally, she won’t let her emotions get her down. She will always find a way. She is so mentally strong that getting up at 4:30 a.m. every day and sometimes studying until 12 p.m. or 1 a.m. doesn’t depress her.

“Sofia doesn’t have great natural talent, but she’s a grinder, and so often I’ve seen grinders finish better than those with more natural talent.

“She is fully aware that what she is doing will open up a lot of opportunities for her in the future, so it’s worth it.”

“Playing in the LPGA is a dream, it would be a great career,” said 16-year-old Gomez-Inowe, “but ultimately becoming a lawyer is more realistic.

“I’d like to play Division I or II college and see what happens.”

She takes a very practical approach to the game.

She takes up the challenge, apparently forever.

Just a few years after her debut, she competed at the US Kids Championship in North Carolina and more recently at the Junior World Tournament in Temecula. She left with mixed feelings.

“I think I did well in the junior world, but US Kids was frustrating,” she recalled. “I think I got caught up in that, and I know I thought, ‘Dang, I could have played better.'”

But she has no doubts about her decision to join fellow Mexican golfers Vanessa Moreno, Camila Ortega and Maya Torres in attending Mater Dei Catholic as a ninth grader.

According to Valenzuela, who lives in Tijuana, students from another country cannot attend public school without having a parent in the district or being part of an exchange program. This explains the fact that eight of the 17 Crusader team members cross the border daily.

“The education here (at Catholic Mater Dei) is more personal than in Mexico,” Gomez-Inowe said. “When you start in Mexico, everyone has the same classes until your first year. It’s based on your grades, and if you’re good enough, it’s like here.

“One of the reasons I came here was so I could play golf and get a good education. There’s a support system here that you don’t have in Mexico, and they encourage you to do extracurricular activities like golf. In Mexico, they just want you to study.

Although she is only a junior, she has already started researching colleges and favors schools like UCLA, Cal, Columbia, and Niagara.

His goals this year are obvious.

“I want to play well enough in the San Diego section to qualify for the SoCals again and then move on to State, which I never did,” she said. “I like a challenge, and taking a new course in the state would be quite an accomplishment.”

As for the team, which finished second in Division 2 a year ago, they believe this group, with the four junior friends from Mexico and a quality group of incoming freshmen and sophomores, could be just as strong or stronger.

Tennis? Not even an afterthought.

Steve Brand is a freelance writer.