Meet Johnny Morris, the fishing guru behind the golf empire in the Ozarks 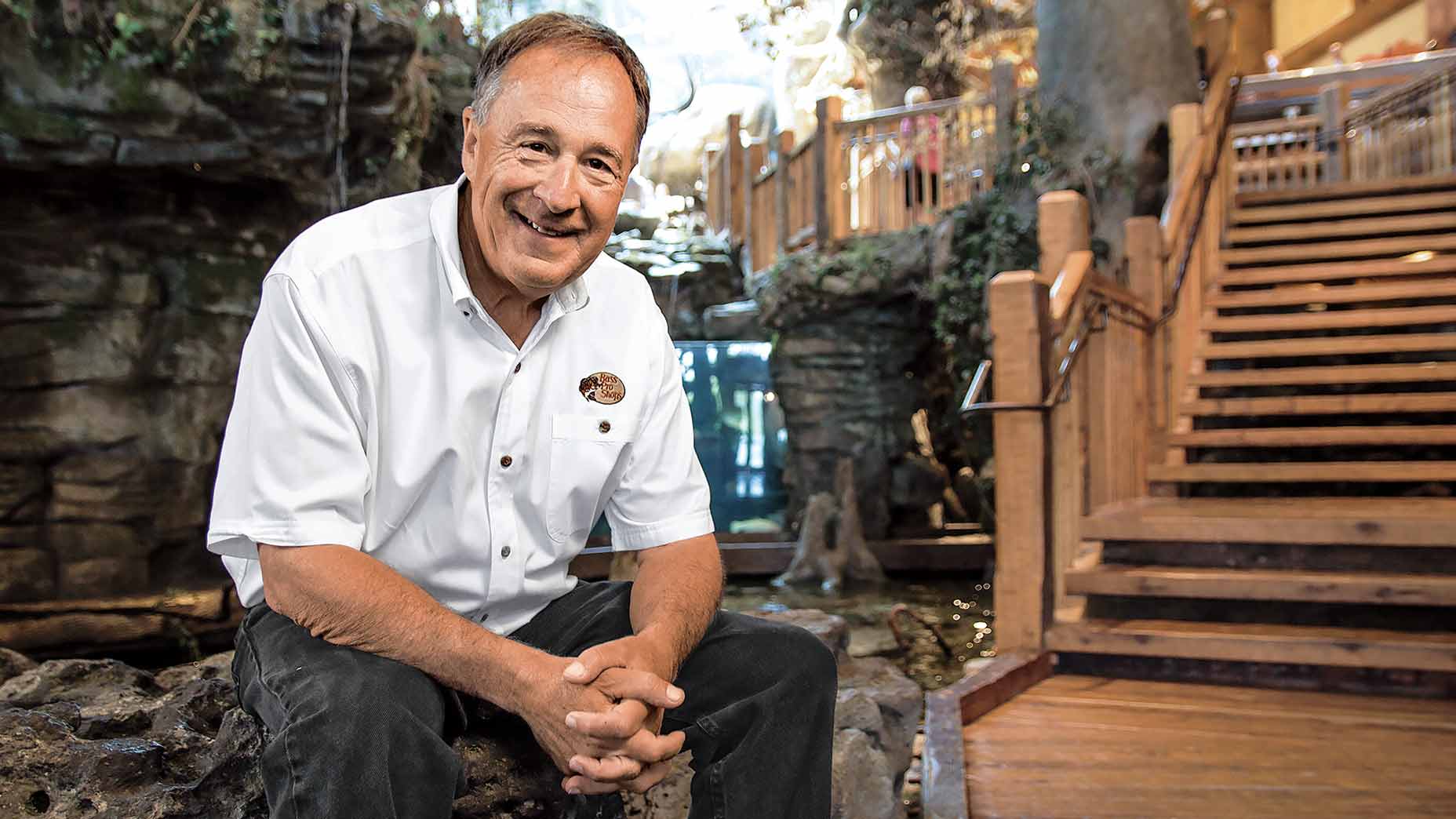 Johnny Morris, the chief visionary of the sprawling wonderland of Big Cedar.

First, Johnny Morris turned his love of the outdoors into the multi-billion dollar Bass Pro Shops empire. Then the sport fishing guru took up golf.

One morning in mid-May in 2015, at a golf resort in the Missouri Ozarks, the earth under a green began to rumble. Moments later, the ground gave way and a chasm opened up, swallowing the green and turf that surrounded it. At most golf properties, the collapse of a sample of playable land would constitute a crisis. But it took place at Big Cedar Lodge, owned by sport fishing magnate Johnny Morris. Morris was excited.

Rather than rush to fill the sinkhole, he sent work parties to dig it out, searching for a network of caves and waterways he correctly suspected lay beneath. The site, which Morris dubbed the “cathedral of nature,” became an overnight sensation. 70 feet wide and 200 feet deep, its belly bursting with limestone spiers, it offers a look into the geological past. It also provides insight into Morris’ character, his original thinking, and his vision of Big Cedar as a showcase for the Ozarks region, where he was born.

“To me, this part of the world is still largely unknown,” says Morris. “And that’s what it’s really about – bringing people to experience the beauty of our rivers, lakes and hills.”

It’s a sunny afternoon in Big Cedar, and Morris stands on a ridge of pines, taking in long views of a rolling landscape. At 74, he has childlike energy and no shortage of outlets. While not a die-hard golfer, Morris has transformed Big Cedar from a rustic getaway into one of the game’s fastest-growing flagship destinations. The property’s golf portfolio, which has begun to take form in 1995 with the opening of Top of the Rock, a par 3 designed by Jack Nicklaus, has swelled to include five title courses, including work by Gary Player, Tom Fazio and Bill Coore and Ben Crenshaw. The newest, opening in late 2020, is Payne’s Valley, Tiger Woods’ first public-access project in the United States.

Among the highlights of the course is a bonus 19th hole, a par-3 backed by a waterfall that Morris devised to emphasize the spectacle of the surroundings. Its teeing ground is a perch with a view, and the path back to the clubhouse loops behind the falls, so golfers end their rounds with a wilderness jaunt.

For such earthy imagination, Morris has been dubbed “the Walt Disney of the Ozarks”. Player, whose Mountain Top par 3 course in Big Cedar winds through layered rock formations, describes him as a “creative visionary” with a knack for “inspiring a sense of wonder.” Because he knows he is no expert in course design, Morris never tries to force the architects he hires. But he likes to throw ideas and tinker around the edges.

Take Ozarks National, Big Cedar’s incredible Coore-Crenshaw route. At the 13th hole, a par-5 crossed by a ravine dug by a stream, the architects planned to build a low bridge over the currents. Morris insisted on an elevated reach to heighten the drama. The finished product – a striking all-wood structure some 75 feet tall that spills through the treetops – is a walkthrough that doubles as a towering gazebo.

“Johnny would be so excited; he was like a kid there,” Coore says. “You could tell how much he loved the idea of ​​golf as a way to get people out in a place so close to his heart.”

Morris fell in love with the outdoors at an early age. The second of four children in a family whose Ozark roots go back generations, he spent a childhood on the loose, pitching tents on gravel riverbeds, trapping crayfish in the shallows – an upbringing of Huck Finn which was also part of Horatio Alger’s tale. When Morris was 10, the construction of a hydroelectric dam on the White River created Table Rock Lake, a newly formed epicenter of a national bass fishing boom. By the time he graduated from Drury University, where he says he “majored in fishing”, Morris had started selling fishing tackle out of the back of the liquor store in his father. The demand was rabid. Morris fueled it by launching a mail-order catalog. That was the birth of Bass Pro Shops, the retail juggernaut that will celebrate its 50th anniversary this year.

Morris built Big Cedar on the remains of a wilderness lodge, which he purchased in 1987. Anglers were his original market. But when the adjacent acreage came up for sale, Morris bought it, intending to preserve it as open space. The property became Top of the Rock, the first stirrings of Big Cedar’s evolution.

Sam Snead once said that he played just enough golf to sustain his fishing habit. He wasn’t the only Tour pro to feel this. The easy back and forth between sports made Big Cedar a natural candidate for a Champions Tour event, the Bass Pro Shops Legends of Golf, which it hosted from 2014 to 2019. It also led to lasting friendships between Morris and a number of the big names in golf.

“Johnny is the most charming and modest man, but his accomplishments are outstanding,” says two-time major champion Mark O’Meara, who counts among his favorite memories of a fly-fishing expedition he and Morris took in Canada to celebrate Morris. ’60th anniversary. “When you’re on the water with him, it’s easy to forget that you’re basically with the Tiger Woods of his sport. He’s had such an impact on golf now too.

It was O’Meara who introduced the real Tiger Woods to fishing when the two were neighbors in Florida. Woods was hooked. In 1997, shortly after his historic Masters victory, Woods phoned Morris. He wondered if Morris would make him a deal on a boat.

“I thought, well, that’s cool. This kid doesn’t just throw his money away,” Morris says. “He wanted a good price.”

Morris agreed but asked for a favor in return: that he and his then 10-year-old son John Paul, an avid golfer, deliver the boat in person. A few weeks later, when the Morrises and a young friend of John Paul’s arrived at a boat launch near Tiger’s Windermere home, a smiling Woods emerged and suggested they try his acquisition. The rest of the day was spent on the water.

“He was asking all kinds of questions,” Morris says, “trying to absorb all the knowledge he could.”

When they got back to shore, Woods told his visitors he had something cool to show them.

“He hops us in his car, and it’s this jacked-up purple Ford Bronco,” Morris explains. “We look out the back and the only things he has room for, other than a PA system, are his clubs and fishing rods. Tiger smiles and the kids love it. I was struck by his engagement with them.

Some 20 years later, Woods went on his own father-son trip to the Ozarks, bringing Charlie with him to Big Cedar. Morris drove them on an outing to one of his favorite spots.

“Tiger likes fishing, but this Charlie, he loves it,” Morris says. “I don’t think he sat all day.”

Those visits were low-key, unlike the one Woods made in late 2020, when he showed up at Big Cedar to unveil Payne’s Valley during a TV exhibition match with Justin Thomas, Rory McIlroy and Justin Rose. Golf and fishing cultures have long co-existed in the resort, but the balance has now shifted in favor of golf. You can see it in the logos worn on the pitch and hear it in stories told around the bar, which increasingly focus on the big missed putts – as opposed to the big one that’s fumbled.

The growing influence of gambling shows no signs of slowing down. Morris could always build another course. He has the land. He even has a rough routing, written years ago by his late friend Payne Stewart. Even if he never adds another hole, there is plenty to keep him busy on the golf side: plans for the future, projects in progress.

“The station is like my dad’s sandbox,” says John Paul, now 33 and Bass Pro Shops’ customer manager. “He wakes up every morning thinking about something else he wants to do.”

The day passes, the sunlight wanes. Morris hiked from his ridge-top lookout to a freshly leveled plateau just below the Top of the Rock clubhouse, a stone’s throw from Nature’s Cathedral. In the seven years since the sinkhole formed, excavations have continued at the site, exposing a maze of limestone caves and waterways. One of these channels runs under the ground where Morris stands. It’s solid ground, all dirt underfoot, but maybe not for long. Morris thinks he should dump him. A practice green is what he has in mind, larger than any on the property, with views of the clubhouse and the Ozarks in the other direction. Steep green hills stretch to the horizon and the amoeba-blue outline of Table Rock Lake.

Morris covers his eyes. “I’ll tell you one thing,” he said. “That would be a really good place to putt.”

A golf, food and travel writer, Josh Sens has been a contributor to GOLF Magazine since 2004 and now contributes to all GOLF platforms. His work has been anthologized in The Best American Sportswriting. He is also co-author, with Sammy Hagar, of Are We Have Any Fun Yet: the Cooking and Partying Handbook.