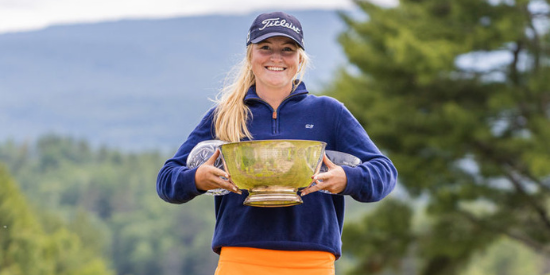 
Morgan Smith with the junior championship and trophies.

After taking a big first-round lead, Morgan Smith never looked back in the New England Women’s Amateur Championship, winning the junior championship and division titles at the Country Club of Vermont on Wednesday. Sana Tufail (Southborough Golf Club) moved late in the standings to finish second. Sue Curtin (Boston Golf Club) won the senior championship division and the tournament title with a 9 of 225.

“It’s my first ever big enough win in a tournament, so I’m really happy,” Smith said.

Although she held a significant lead for much of the competition, Smith didn’t let the advantage change her strategy.

“I stuck to the game plan of playing my own game,” she said. “Obviously today there’s a bit more pressure because it’s the last day of the tournament and I had a bit of a bumpy start, but I managed to turn things around while playing quite well today. today.”

Smith’s performance on Day 3 was highlighted by a series of three birdies on the front nine – capped by an eagle on the par-4 7th hole – and two consecutive birdies on holes 17 and 18 to secure victory.

Tufail shot a 5 of 221 en route to second place after surging on the back nine. She shot a 34 on holes 10 through 18, the best back-nine score of the day.

She again preached “damage limitation” as the key to her success throughout the championship, although she felt she had room to improve her game earlier in the event.

“I improve in the second and third rounds, but I think it’s just that I can start the first round better,” she said. “And again, it can be constant preparation, learning the course a little better in practice rounds, knowing where to be and where not to be, but I’m really, really happy with how my game is developing.”

Tufail is tied with Molly Smith (Vesper Country Club) for the second best score in Round 3 with an equal par of 72, one stroke behind Morgan Smith.

Molly Smith’s 72, a five-stroke improvement from the second round, tied her for third with Angela Garvin of the University of Maryland (The Ranch Golf Club) at 7 over.

“It’s a little weird,” Morgan joked, “but we’re having fun there.”

The Smiths, who were in the same group for round two after finishing within five strokes of each other on Day 1, also had family members supporting them on the course.

Jade and Ruby Haylock (Turner Highlands Country Club) of Maine also competed on the final day of competition. After each shooting a 167 in two rounds, they narrowly missed an opportunity to play in the same group in the final round.

“I was hoping to be with her so I could keep an eye on her and try to be in good standing with her,” Jade said.

However, Haylock said they still had a great time playing together in the Championship and trying to get ahead of each other.

“We are very competitive with each other,” she said. “I love competing with her and when I beat her it’s really fun.”

Smith joins a large group of Bay State golfers who have emerged victorious in the championship and won 29 combined titles for Massachusetts – the most of any state in the New England Women’s Amateur.

Smith also beat two previous champions competing against her in the Championship Division – 2020 winner Megan Buck (Thorny Lea Golf Club) and Johnson, the back-to-back champion in 2018 and 2019. She played in the same pool as Buck on Day 1 ., building up a 10-stroke advantage during the round, and the same group as Johnson on Day 3, when she finished 7 strokes ahead.

Qualification in stroke play 18 holes for 2 flights in match play of 32 players. Must have current established GHIN handicap from a member club of the Massachusetts Golf Association.