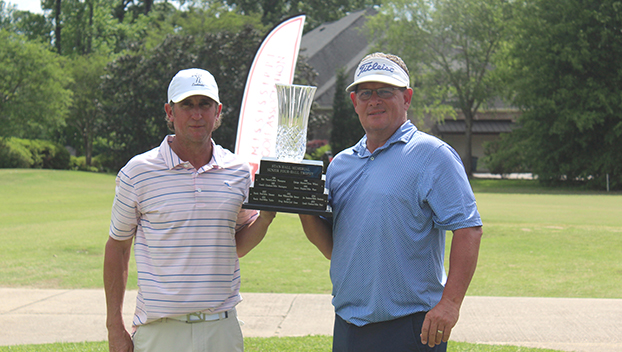 Bubba Kaiser and his partner Paul Guido had a strong performance in the final round and won their Super Senior Flight. Tom Bryant and Jeffery Anderson put a lot of pressure on Cotton and Ham on the last hole with a charge on the last round.

Meason and Smith held a two-shot lead and had the least pressure heading into the final round. Smith said they simply held their lead throughout the day to finish six under for the Grand Masters Championship tournament.

“We were in partnership today. We both played well and were brothers-in-law, which means if I hit a bad shot, he hits a good shot, pretty good,” Smith said. “We did this all day. We played consistently, so that was key to our success. It feels good to win anything in competition, but especially the national competition, it feels better. We appreciate the State Golf Association for the competition here at Natchez. I think we had about 80 people here.

There was a lot of pressure on the other two pairs as they made their way to the final hole. After a bogey 17, Brooking and Byrne needed a birdie to secure a win.

“I am delighted to win. I was very nervous on No. 18. I have another state championship that I won. Any time you have a chance to win a state championship, that’s a big thing,” Brooking said. “We had to have the birdie. We knew the second place group would have to shoot 66 to tie or 65 to win. It was going to be tough with the win and pin placements. We ended up winning all of a sudden. »

The pair had a good front nine to start the day with birdies on the No. 5 and No. 8. They shot par or better to the No. 14 hole, where they bogeyed.

Byrne birdied at No. 15 to put them on the right track, and Brooking birdied at No. 16. Their victory was the first time they won a four-ball state championship as they finished 13 under par.

Cotten and Ham found themselves one stroke behind the leaders of the senior championship. David Allen and partner Robert Sanford, who won The Natchez Open senior championship last year, double-bogeyed on the third hole and couldn’t recover. They went from first to seventh by pulling one on the final day.

Their couple Cotten and Ham started the day much better. They birdied No. 2, No. 5 and No. 8 on the front nine. After Ham and Cotten had trouble on the No.9 and fired a bogey, they recovered with birdies on the No.11 and No.13. Cotten joked the whole round was a series of turns.

“We haven’t birdied two holes in a row all weekend. It was a struggle. It was comforting to know that my man here could turn it on,” Cotten said. “All I had to do was make par. I rode it like a sea biscuit or a rental mule. It was a fun weekend. We love our golf course, even when it gets the best out of us.

Playing partner Ham won his second senior championship with a 13-under round. He won his first individual title this year. At 50, Ham looks closer to 35, the MGA official said when presenting his trophy to the team.

At the 15th hole, Ham had to take a stroke penalty for a breach when he went to mark his ball. One of the two clubs escaped him and hit the ball, which earned him a penalty. Cotten bailed them out with a par.

A bogey on the 16th and a par on the 17th put all the pressure on until the last hole. Cotten hit his second shot about 20 feet from the hole.

“We had to birdie 18 to win. I had looked at the leaderboard after 17. He hit a chip that hit the pin. I felt pretty comfortable that we were going to win, I just had to shut it up.

He sank his fourth putt to win it and complete the sweep at Beau Pré. Kaiser, Anderson, Bryant, Smith and Meason watched as the two emerged from the No. 18 green as senior champions.

After the round, Ham wanted to thank some people for the weekend.

“We thank everyone who volunteered. We thank the MGA and the staff at Beau Pré who made this all possible,” he said.