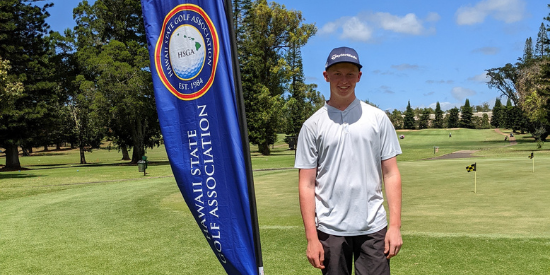 Niall Shiels Donegan, a junior from Tamalpais High School in Mill Valley, Calif., won the Hawaii State Amateur on Sunday at Leilehua Golf Course in Wahiawa. Donegan carded rounds of 67-74-71-70 to finish 6-under for the event, earning a seven-shot win over Dane Watanabe and Jordan Sato, who tied for second at 1-over. Donegan was the only player on the court to finish in red numbers.

Donegan’s opening 67th round, which included an ace on Leilehua’s 310-yard par-4 eighth hole, which was his 17th of the day, helped him take a three-shot lead after the first round. His lead was reduced to two after a second-round 74, but rounds of 71-70 over the weekend secured his wire-to-wire victory.

The hole-in-one was Donegan’s first ace in a competitive round.

“It was a left dogleg and I hit a draw over a tree on the corner,” Donegan said. “I actually hit the group in front of me and they said the ball rolled down the slope of the green and into the hole at perfect speed.”

A member of the 16-U Scottish national team, Donegan’s game has been on the rise since last summer, when he reached the R&A Boys’ Amateur semi-finals at the Royal Cinque Ports in Deal, England. He also reached the last 16 of the Scottish Amateur Championship and had strong performances at the St. Andrews Boys Open (9th), Scottish Boys U-16 (6th) and Scottish Boys’ Amateur Championship (13th).

Although he admits his time in the UK last summer did wonders for his game and his confidence, Donegan points to his missed cut at the South Beach Amateur in Miami just before Christmas as a much-needed reality check.

“I came back from the UK and felt pretty good about myself and my game,” the Northwestern pledge said. “Then I missed the cut in South Beach and finished second to last. It really brought me back to reality and I started working harder than ever.” His morning routine includes waking up at 4 a.m. to putt on the mat upstairs in his house before heading to the Mill Valley golf course to work on a variety of shots. Then it’s off to school.

Don’t look for Donegan on the AJGA circuit this summer – he plans to return to the UK to play a similar schedule to last year when he qualified for the R&A Amateur semi-finals.

“My aim is to represent Scotland at the local Internationals in August.”