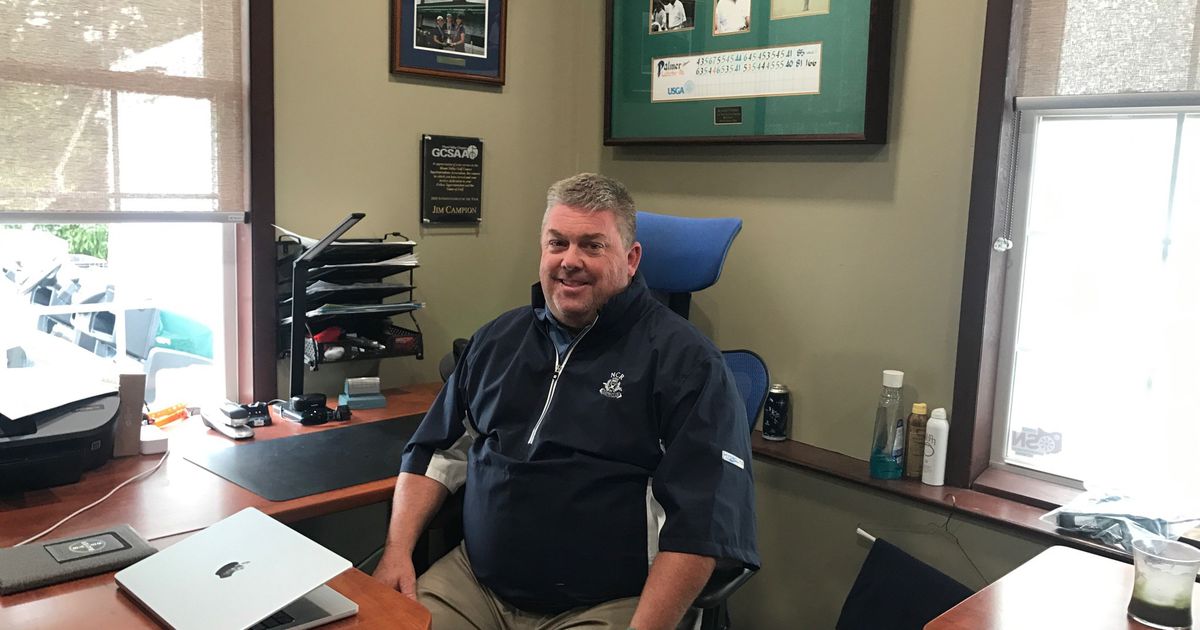 Campion is NCR’s Director of Golf Courses and Grounds and last week that meant making sure the South Course met all USGA Championship requirements and gave all women on the pitch – “120 of the best female senior golfers in the world,” he pointed out to his RNC greens team – a stern but fair test.

In the process, he also wants to make sure the course looks good, both for the crowds that have flocked to the famous Kettering circuit and for domestic viewers. If that happens, he said not only is it a good reflection of the NCR Country Club and its members, but also the surrounding Dayton area.

“It’s a marquee event that’s huge for the region,” he said.

Early Saturday morning you got to see some of the extensive preparation that takes place just after dawn.

Pin locations are changed daily and, as the old saying goes, “it takes a village”.

The scene I watched on the ninth green was repeated on the other 17 massive putting surfaces as well.

As Campion observed, five people took care of a myriad of tasks before the new hole was dug into the perfectly trimmed bentgrass surface.

Two USGA officials used a tape measure to line up the coordinates as if they were working on a buried treasure map that took them to the right place.

Campion said the pin placements for the seven days of the tournament – three days of practice preceding the four days of actual play – were likely chosen “six to eight months ago”.

Prior to this, the USGA competition director had walked the course several times, played it and observed other people’s golf games.

Steve Stockelman, (left) the assistant superintendent of the NCR North Course, and volunteer Jim Dillard of Columbus work on the ninth green of the NCR South Course early Saturday morning before the start of the third round of the US Senior Women’s OpenChampionship. Jim Campion/CONTRIBUTED

Steve Stockelman, (left) the assistant superintendent of the NCR North Course, and volunteer Jim Dillard of Columbus work on the ninth green of the NCR South Course early Saturday morning before the start of the third round of the US Senior Women’s OpenChampionship. Jim Campion/CONTRIBUTED

USGA agronomist Paul Jacobs showed up to every Saturday green with a TruFirm golf green hardness meter that uses a hemisphere-shaped impact hammer that mimics the shape of a golf ball airborne making a footprint in a putting green.

Then he used a stimpmeter, a long V-shaped chute from which he rolled three golf balls onto the green and, with some quick mental calculations, was able to check the speed and accuracy of the putting surface. .

Finally, when the exact location was confirmed, the hole was dug by Steve Stockelman, the assistant superintendent of the North Course, assisted by Jim Dillard of Columbus, one of more than 400 volunteers from 10 states who help organize this tournament.

Campion arrives at the course at 4:30 a.m. each morning to begin a long list of daily preparations.

He meets his staff, then walks to four of the greens and turns on towering portable lights that had been towed the night before. This way, workers can start preparing nearby greens and bunkers in the dark before dawn.

He also prepares the driving range for the players who will hit balls before their games.

He and his team worked 15-hour days last week, but the payoff comes at times like Saturday when LPGA legend Amy Alcott, a World Golf Hall of Fame player who also designs courses, offered an unsolicited review:

“The course looks great. It’s just in great shape. They did a good job.

And a bonus for the 52-year-old Campion also comes unexpectedly.

The two courses cover some 340 wooded areas and if you add the nearby Moraine Country Club and Mead Estate it’s like a 500 acre oasis right in the middle of Kettering.

Campion spoke of regularly seeing deer early in the morning on the driving range. There are coyotes and foxes and his wife Marcie, who was visiting him at his office the other day, said they had seen a bobcat once.

And then here is the scene on Thursday night, as the final group of three completed their first lap on the front of the course.

As they descended the seventh fairway, a wild turkey strutted right behind them.

Campion’s green-keeper genes first manifested as a child in the Northridge region of southern Vandalia.

“I mowed neighborhood lawns for a few years, then bought my own mower and mowed some more,” he said.

His father helped him get a job at the Kitty Hawk public golf course when he was a student at Chaminade Julienne when he was 16. A few years after graduating, he enrolled at Clark State Community College to earn an associate’s degree in turf management.

After a six-month internship in Baltimore Country, Maryland, he returned home and upon graduation worked on the NCR crew.

It was 1991 and eventually he became an assistant greenskeper and in 1999 was hired as the golf superintendent of the NCR Country Club.

Over the years, he has overseen massive improvement projects on the courses. In 2003, a $2 million irrigation system was installed under the southern greens and over 30 fairway aces were redesigned and reseeded.

USGA agronomist Paul Jacobs uses a stimmeter to determine the speed and consistency of the ninth green on the NCR South Course early Saturday morning before the start of round three of the US Senior Women’s Open Championship. Jim Campion/CONTRIBUTED 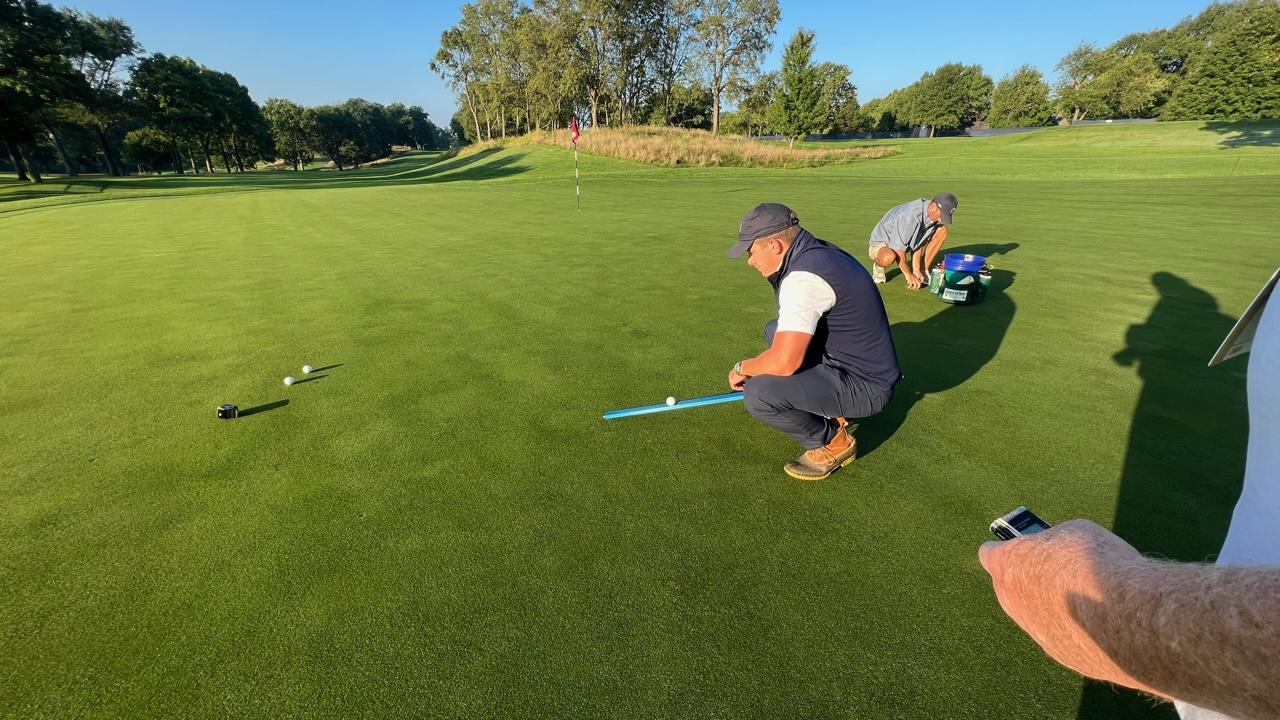 USGA agronomist Paul Jacobs uses a stimmeter to determine the speed and consistency of the ninth green on the NCR South Course early Saturday morning before the start of round three of the US Senior Women’s Open Championship. Jim Campion/CONTRIBUTED

Shortly after, the bunkers were redone.

Campion set the course for the 2005 US Senior Open and it was a walk in the park compared to the nightmare her predecessor faced at the 1986 US Women’s Open here when the tournament was hit by rain, a quake of land, swarms of locusts and a train crash in Miamisburg that left a toxic cloud blowing in and out of the area for five days. The challenges this year – excessively hot days in June and seven inches of rain in early July – were minor.

Some patches of grass couldn’t handle both the heat and the humidity, but milder temperatures recently – and hard work – have helped alleviate that.

Campion said: “The feelings have been very positive from the players.”

During a late morning lull the other day, I found Campion in his office, which is at the end of the center turf barns on the first fairway.

Mounted on the wall behind him was the replica scorecard from Arnold Palmer’s last two rounds of competitive golf. They came to the 2005 Senior Open here when he shot an 81 and an 85 for a total of 166. He missed the cut,

Ironically, the legendary JoAnne Carner, who is 83 and shot twice her age, finished with a 166 and missed the cut here this week. Afterwards, she said it would be her last senior women’s US Open.

A plaque honoring Campion’s work hung on another wall, but he never mentioned it. He is a man who does not like to honk or even attract attention.

In front of him, a large-screen television was tuned to the weather channel.

Marcie – who is recovering from hip replacement surgery 2.5 weeks ago and has just graduated from cane – said it takes the commitment of a whole family for a job like this. her husband.

She has a doctorate in nutrition from Cal-Davis. They met on a blind date that turned out to be visionary.

She and the boys would visit Jim on Mondays when NCR was closed and they would have picnics and go on wagon rides.

During the winters, Jim and a few of the other workers learned to tap trees and make maple syrup.

She opened the small refrigerator in her husband’s office and took out a bottle of dark-colored sweetness.

Gabe, who is 21, previously worked on the greens team and Sam, 16, hopes to start working here next year, middle son Ben, who is 19 and is traveling to the state of ‘Ohio, comes back every day to work the tournament.

Many people in the golf community have done the same. Campion mentioned several area golf superintendents who are volunteering this week and a few of them have brought some of their workers with them.

And the other night, after a long day, several of them joined Campion for a real treat.

“We finished a little earlier, around 9 a.m., and went to the seventh tee on the north course and they were all taking pictures of the sunset,” Campion said.

“All these guys from other courses here taking pictures and having fun, it was pretty special.”