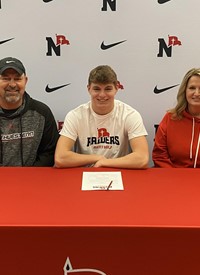 Noteboom participated in three seasons of college golf for the Knights of Unity Christian. His best 18-hole score is 75, 78 being his 18-hole average. He was a War Eagle Conference First Team winner and state qualifier so far in his high school career.

“We are delighted that Jack is joining the Raider golf family,” said head coach Aaron Aberson. “I have had the opportunity to see his growth in golf up close and he is someone we have wanted to add to our program for several years. Jack’s athleticism and willingness to work hard will translate into a very bright future.

Noteboom plans to study business at Northwestern. He is a student on the honor roll. Noteboom is the son of Bruce and Sheila.

“It’s a good Christian college with a good golf program with a great coach,” Noteboom said when asked what made him choose Northwestern.