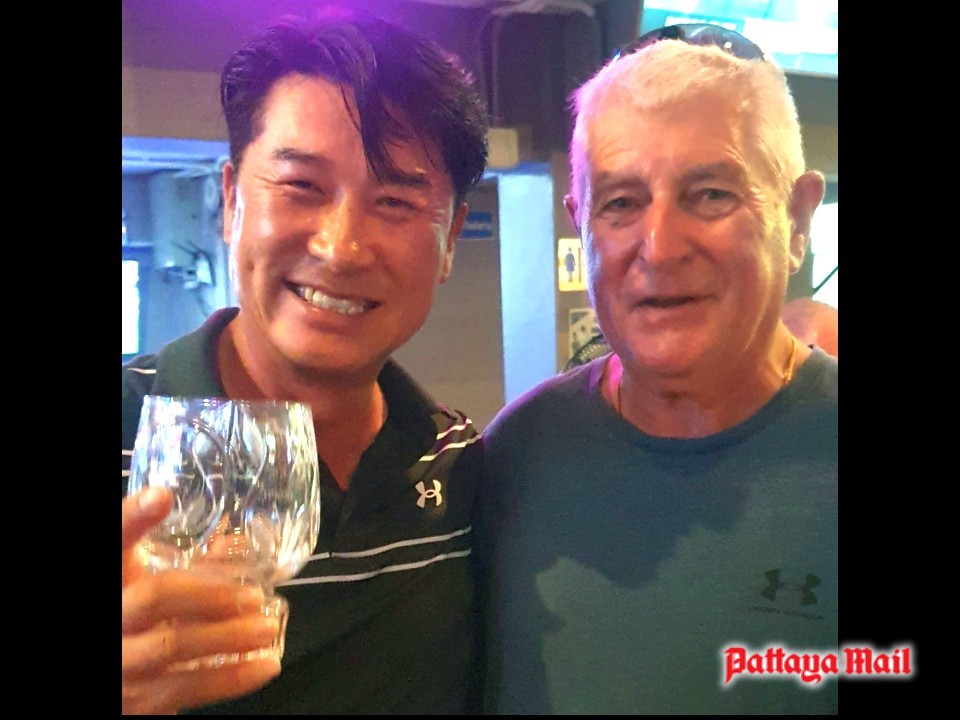 Treasure Hill was as tough as ever today with all the usual obstacles (trees) in place, some would say all the wrong places, the saving grace being the course condition which was very good. Although another stay in Thailand, the green fees weren’t too bad compared to many other courses.

Today we had the pleasure of welcoming a first time visitor to Thailand from Donegal in the Emerald Isle, Sean O Gallchoir playing with an eight handicap. Not only could he play golf, but he also turned out to be a wicked pool player, a skill he demonstrated late at night by being one of the last to leave the bar, if only the game was. allowed in Thailand, it would have cleaned.

Nobody really mastered the course today, the best score being a modest thirty-four points from Gary Smith. Ken Davidson took second out of thirty-two but off a very generous handicap of twenty-eight beating Paul Smith into third on the countdown. All close pins were taken with one each to Ken Davidson and Gary Smith and two to Les Cobban.

A rare sight indeed for Treasure Hill with a huge troop of monkeys massing on the seventh tee, reminiscent of Bangphra although this lot seems much more shy and moves away as we approach.

After a four-year absence, one of the Bunker Boys’ longest-serving members, Richard Baldotto, made his long-awaited return for today’s match at Green Valley.

Looks like we made it through the monsoon season with no threat of rain today and no need to apply the pick, clean and fall rule, although some did experience the odd ball of mud . Overall the course was in very good condition and returned very good marks.

It seems like a matter of time before Paul Smith gets back to zero from his current handicap of three. Narrowly missing an eagle putt by a mustache on the first, he set a blistering pace and followed it up with three more birdies to top the standings with thirty-nine points. Another likely to receive a cut was second-placed Travis Kim, who was again in frame with a very respectable thirty-seven points.

Mr Consistency Mike Smith took third place with thirty-six points and is now a regular in the winner’s circle. A very curious pin placement to the far right of the green on the third par three must have fooled everyone with no one from the four groups on the green on what is normally an easy par three. Richard Baldotto got a close pin with as usual Paul Smith taking two.

Today we were finally able to present Travis Kim with his trophy close to the pin after several failed attempts. So far this year we’ve had four near-clamps, the others being Paul Smith, Raleigh Gosney and Les Cobban, will we see another by the end of the year?

A painfully slow game today at Khao Kheow where we received all nine C&As. We were behind a group that had no understanding of speed of play or golf etiquette and held the whole field all day. The course was in fair condition with the exception of the greens which were very slow despite looking fast not only did they not take any breaks which meant two and three putts were common resulting in low scores .

Travis Kim took the honors today with a modest thirty-three points. On hole C 8 where he landed his very first ace, he got even closer today but didn’t make the birdie putt. Neil Griffin again took second place on thirty-three points off his very generous handicap of twenty-seven, surely a cut is coming soon. Gary Smith took the third one adrift shot. All close pins were taken with one each for Neil Jones and Mike Smith, and as usual Paul Smith took two. Normally a very confident putter Paul was another who fell victim to the tough greens.