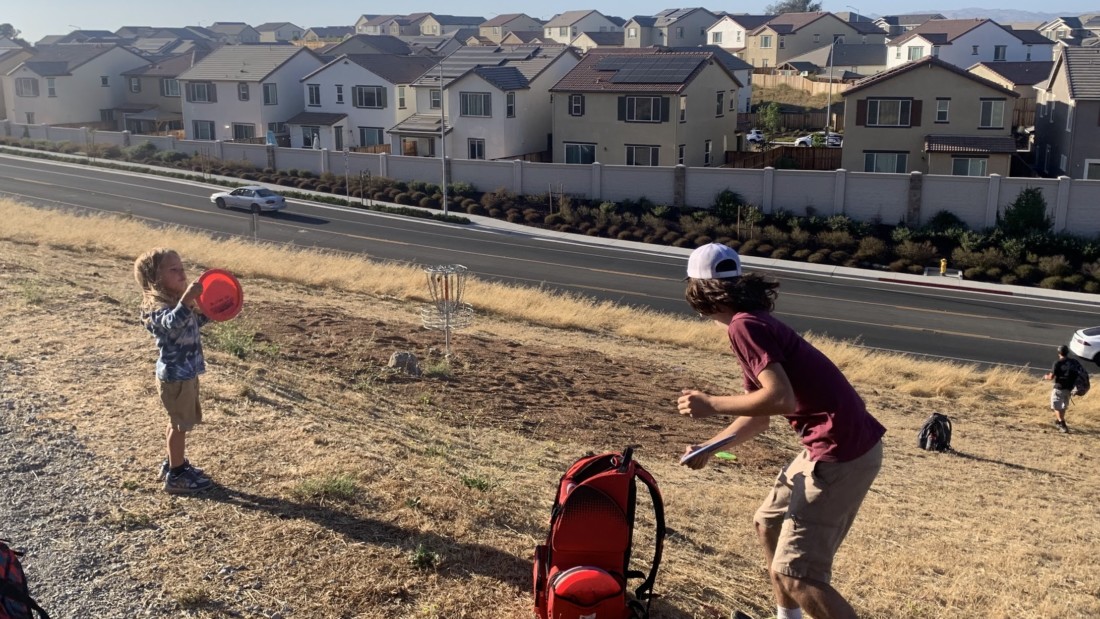 This article was written by BenitoLink intern Juliana Luna

Vista Park Hill is Hollister’s highest peak with 180 degree views from city lights to mountain ranges. Nine disc golf holes are scattered up the hill to enjoy, providing different vantage points from which to take in the views. On July 23, disc golf players will compete in the park’s first disc golf tournament from 8 a.m. to 3 p.m. as part of Hollister’s 150th anniversary celebration.

Winners from all three divisions will receive a bespoke 150th Anniversary Disc. All players will receive a gift bag with items to commemorate Hollister’s 150th anniversary. The event is hosted by the San Benito County Disc Golf Club.

The first features of a disc golf course have secretly begun to appear on the side of the hill. Hollister’s Robin Pollard brought disc golf to Vista Park Hill in 2021 without following the town’s usual procedures. The golf course eventually received city approval.

Pollard said she wanted to change public opinion of the park, noting that many residents often think the hill is “dark and dangerous”. She said she hoped that by creating local disc golf, it could attract families and bring the park to life.

A 2007 state inspection found the park to be unsafe, leading to the removal of playground equipment except for two swing sets. Former director of management services Mike Chambless said the lack of facilities has led to a drop in public attendance and an increase in criminal activity. In December 2014, the Hollister City Council approved funds and a grant to purchase playground equipment for the park..

Now the park has swings and play equipment.

“Robin was kind enough to buy the baskets and we invested in the sweat,” Gonzales said.

Pollard, Gonzales and other locals volunteered to create a nine-hole course and hiking trail.

“I tell pretty much everyone I see to try it,” Gonzales said. “It’s a little different from regular Frisbee, but most people get addicted to it.”

Gonzales said the best thing about playing disc golf at Vista Park Hill was the cost of playing at the park.

“It’s free, it’s for all economy classes,” he said.

Whether they’re preparing for the tournament or just hanging out, the players met at the practice hole on July 1.

Christian Dwayne Anderson, who has been playing disc golf for 10 years, has signed up for the next tournament.

He compared the sport to hiking. “Like hiking but with a purpose, more fun,” he said. “It allows you to exercise.”

“Wherever I go I try to find a course to play,” he said. Talavera found his passion for the sport in 2001 while attending CSU-Monterey Bay.

He now teaches third grade at Cerra Vista. News of the new disc golf course at Vista Park Hill prompted him to tell his students to visit the course.

During a physical education class, Talavera introduced disc golf to her students.

“A lot of them ask me where they can play, and I told them here,” he said.

The BenitoLink Internship Program is a paid skills development program that prepares local youth for a professional career. This program is supported by the Monterey Peninsula Foundation AT&T Golf Tour, United Way, Taylor Farms and the Emma Bowen Foundation.

Help us recruit more interns! As a local non-profit news organization, BenitoLink needs community support to continue to grow important local programs like our youth and Latinx intern training program. You can continue to do so by visiting our BenitoLink donation page.