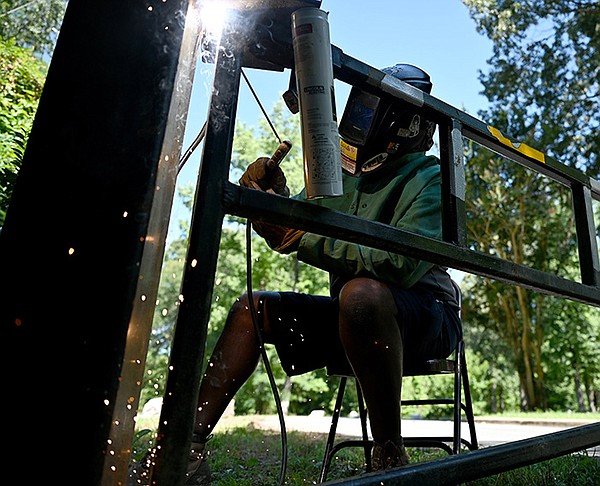 Little Rock Parks and Recreation Director Leland Couch at a town hall meeting on Wednesday said proceeds from upcoming Parks Bonds could be better spent renovating and improving existing assets rather than for more expensive projects.

If the city had more money, officials should consider “bigger” projects, Couch said in response to a participant.

However, pursuing something like a sports complex “would take all of that and more,” Couch said, referring to the $24 million in bond proceeds that should be available for park-related capital improvements.

He said officials could look at how to make improvements to community centers or upgrade aging ball diamond lighting systems — a move that would also reduce maintenance costs, Couch said.

Couch’s remarks came at the latest in a series of public meetings for city officials to seek input on potential projects related to streets, drainage and parks.

In his remarks to attendees, Webb said, “We have huge infrastructure needs in this neighborhood and we have huge needs for parks.

She added that residents were “blessed” to have so many municipal parks in the neighborhood. A group of people have been working for more than a decade to bring another park into the system, “and we think that’s about to happen as well,” Webb said.

In a special election Aug. 9, Little Rock voters authorized an extension of three factory fundraisers and a bond issue of up to $161.8 million tied to six categories of capital improvements .

In addition to parks, voters approved the spending of bond proceeds on streets, drainage, fire department apparatus, the acquisition of land in the Little Rock Harbor Industrial Park, and the construction of a new municipal court building.

City officials plan to pursue multiple rounds of bonds, which are expected to generate about $154 million in funds for projects.

In the first three years of the initial cycle, about $5 million will be allocated to parks, Couch said Wednesday.

Ward 3 in North Central Little Rock encompasses War Memorial Park, which was previously the site of an 18-hole municipal golf course. In 2019, the city closed the public golf course along with another course located at Hindman Park due to budget constraints.

As part of the bond issue, if the city invests $2 million or $3 million in War Memorial Park, “we won’t be able to generate and build a whole new master plan park in War Memorial,” Couch said in answer to a question.

By comparison, Couch pointed to the $1.4 million price tag associated with work already underway to rebuild the basketball courts and make other improvements to Kanis Park.

Still, Couch said officials will review master plans made in the past for War Memorial Park to assess what they can do. Some park infrastructure needs could absorb some of the funding, he said, adding that the city is seeking input from the public.

Additionally, when asked about golf courses, Moore at one point suggested that reopening golf courses at War Memorial or Hindman parks “would take a lot of money.”

City officials have asked residents to submit their project applications by September 30 through documents available at one of the public meetings or through an online form.