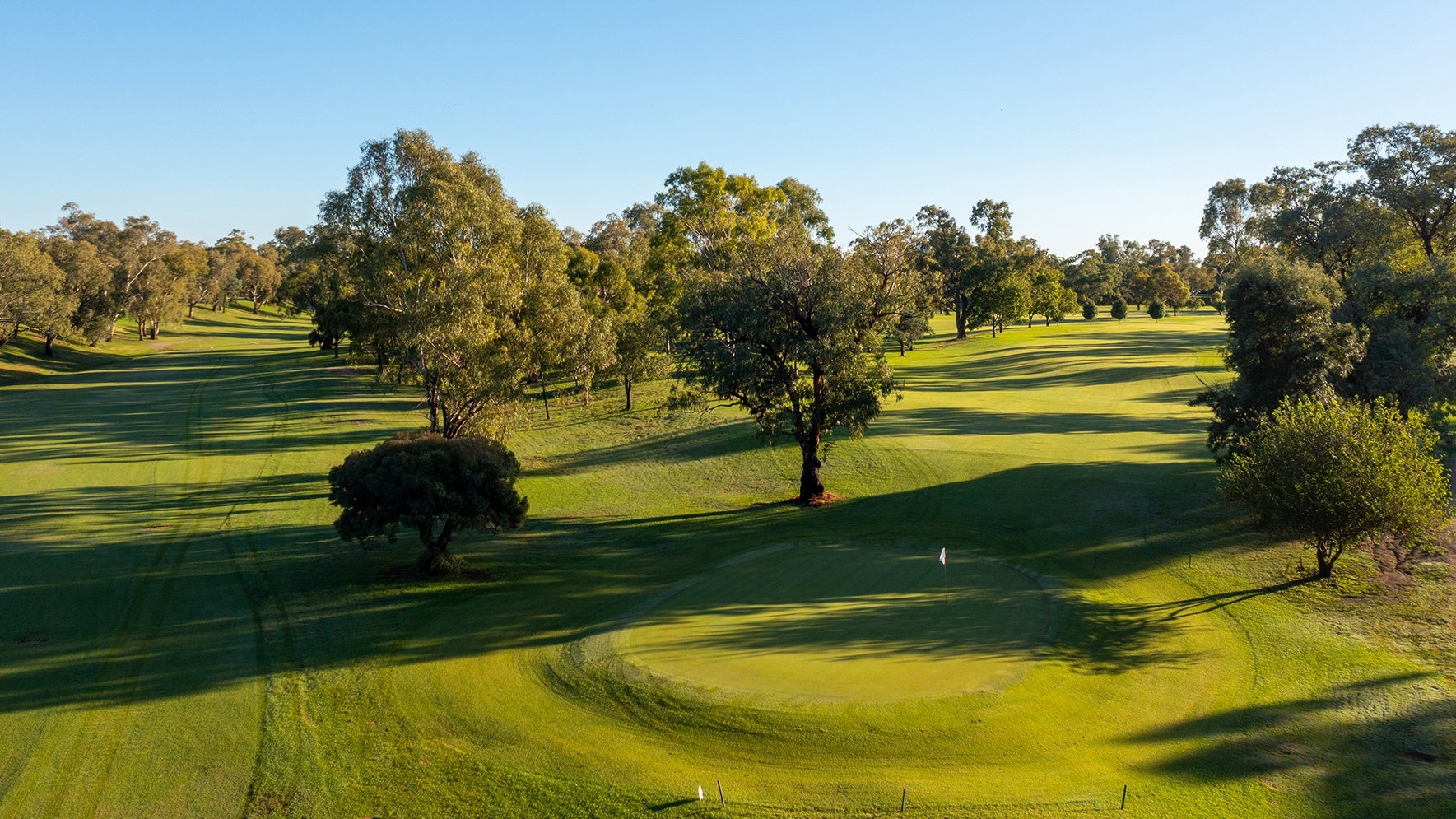 The northern New South Wales town of less than 7,500 people is the center of a fertile agricultural region producing wheat, cotton, olives, sheep and cattle. The largest pecan farm in the southern hemisphere is a 25-minute drive east of town.

It’s above the ground. Beneath the ground is the Great Artesian Basin, the largest and deepest groundwater reservoir in the world. This warm, mineral-rich water has helped Moree and the surrounding area gain popularity as Australia’s capital of artesian spas.

But as I discovered recently, this quaint country town, about 620 km north of Sydney and 480 km south-west of Brisbane, has been doubly blessed by Mother Nature. And that comes in the form of the par-72 layout at Moree Golf Club.

The course sits on both sides of a bend in the meandering Mehi River and covers naturally rolling terrain, with large stands of gum trees and a host of other native species densely lining its well-maintained Kikuyu fairways. It wasn’t always so idyllic.

The club was formed in 1906 and the founding members staked out nine holes with sandy greens on a course where most of the back nine of the current course now sits.

That was golf in Moree for the next 50 years, until the arrival of PGA Professional and course designer Arthur East.

Arthur East was only 15 when he became an assistant professional, working with his older brother, Victor, at the Australian Golf Club. He worked there for eight years before moving across town to work for Fred Popplewell at the Concord Golf Club in 1915.

In 1922, Arthur and Victor left for the United States to take up professional club positions. Arthur was a professional at the Elmhurst Country Club in Chicago for eight years, during which time he built golf clubs and dabbled in course architecture.

After returning to Australia in 1930, Arthur became the professional at Lakes Golf Club and later joined Victor and his younger brother, Richard, in establishing the East Brothers club manufacturing company (in the 1950s the company merged with Chesterfield to become Precision Golf Forging). – PGF – one of Australia’s most popular golf club manufacturers for the next 50 years).

Arthur remained at The Lakes until after World War II, when he combined his enjoyment of teaching acting with course architecture. He was hired by the NSW Golf Association to tour the state, giving lessons and lectures to members of dozens of clubs and advising club committees on how best to improve their course.

Measuring 6,107 meters above the rear markers, it would have been a long brute in the years since East’s work was completed. It’s not child’s play today either.

There were few places in New South Wales that Arthur East did not visit and, although his impact on New South Wales golf is little known today, he was a designer and a prolific course remodeler in the 1950s.

In mid-May 1952, East arrived in Moree for three days and, as the local paper reported, for “professional courses for members and associates.” His services will be available for 10/ (shillings) per half hour. 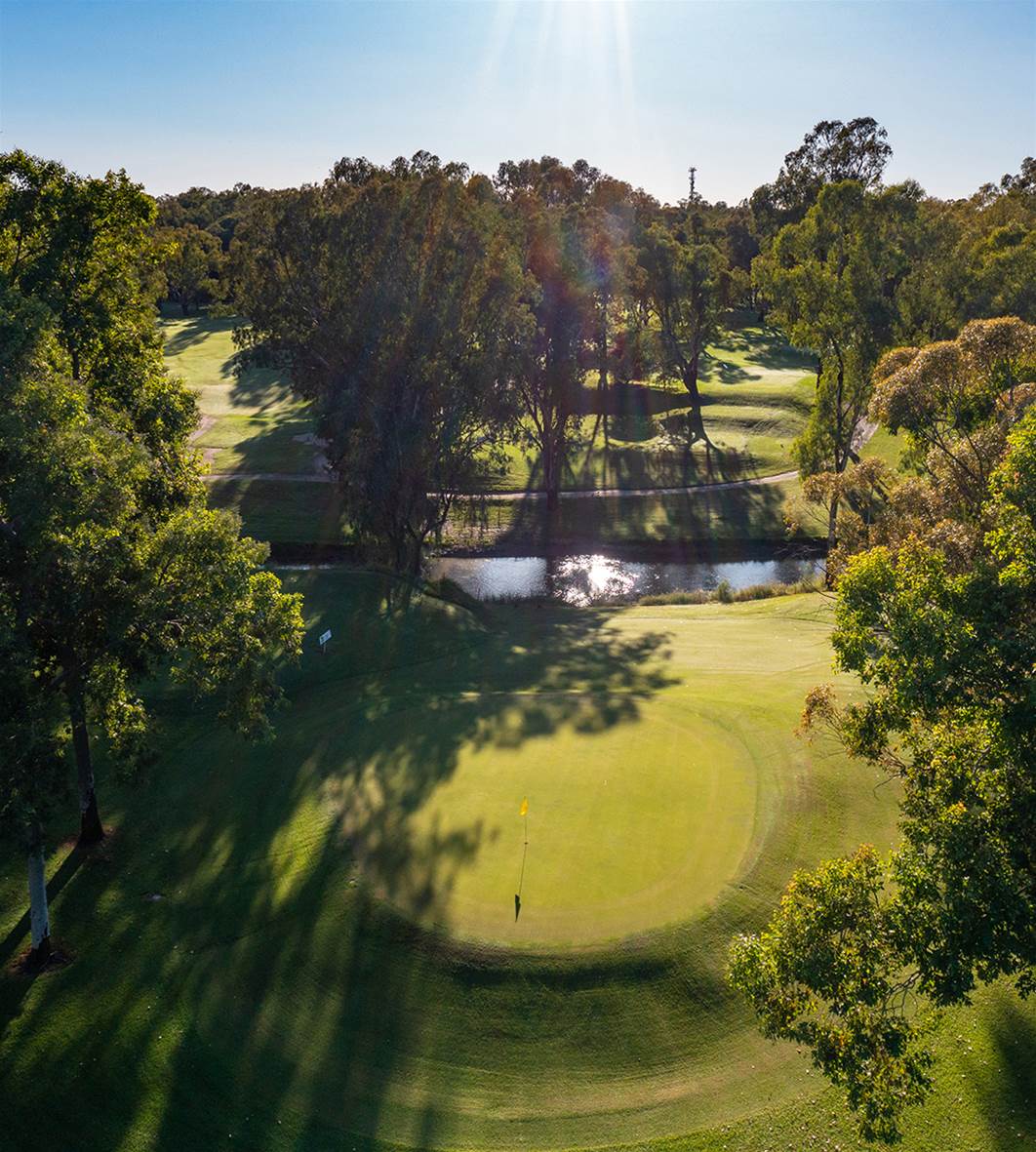 It would not be the last time East ventured to Moree as the club then gave him the task of overseeing the extension of the course to 18 holes and ultimately the conversion to grass greens.

RIGHT: The Mehi River cuts the par-3 17th in half, but you’ll have more trouble with the trees here. PICTURED: Brendan James.

East’s plan was to lay the course on both sides of the Mehi River, but he had to factor any future flooding into the review of the layout as well as how he would construct the greens and tees. The greens most susceptible to flooding during flooding (there have been six major floods since the East overhaul was completed) are pushed slightly higher above the fairway, while several tees are located on the highest point nearest the previous green.

With the exception of the construction of the greens and the leveling of the tees, it is understood that a minimum of earthwork was carried out when creating East’s design, which has changed very little over the past 65 years.

It’s telling to consider as you ride the course that the terrain – which varies from relatively flat with small bumps and flats, to dips and gullies deep enough to obscure your view – was designed entirely by Mother Nature and East a simply incorporated every quirk on the ground into its design.

Moree has also stood the test of time. Measuring 6,107 meters above the rear markers, it would have been a long brute in the years since East’s work was completed. It’s not child’s play today either. 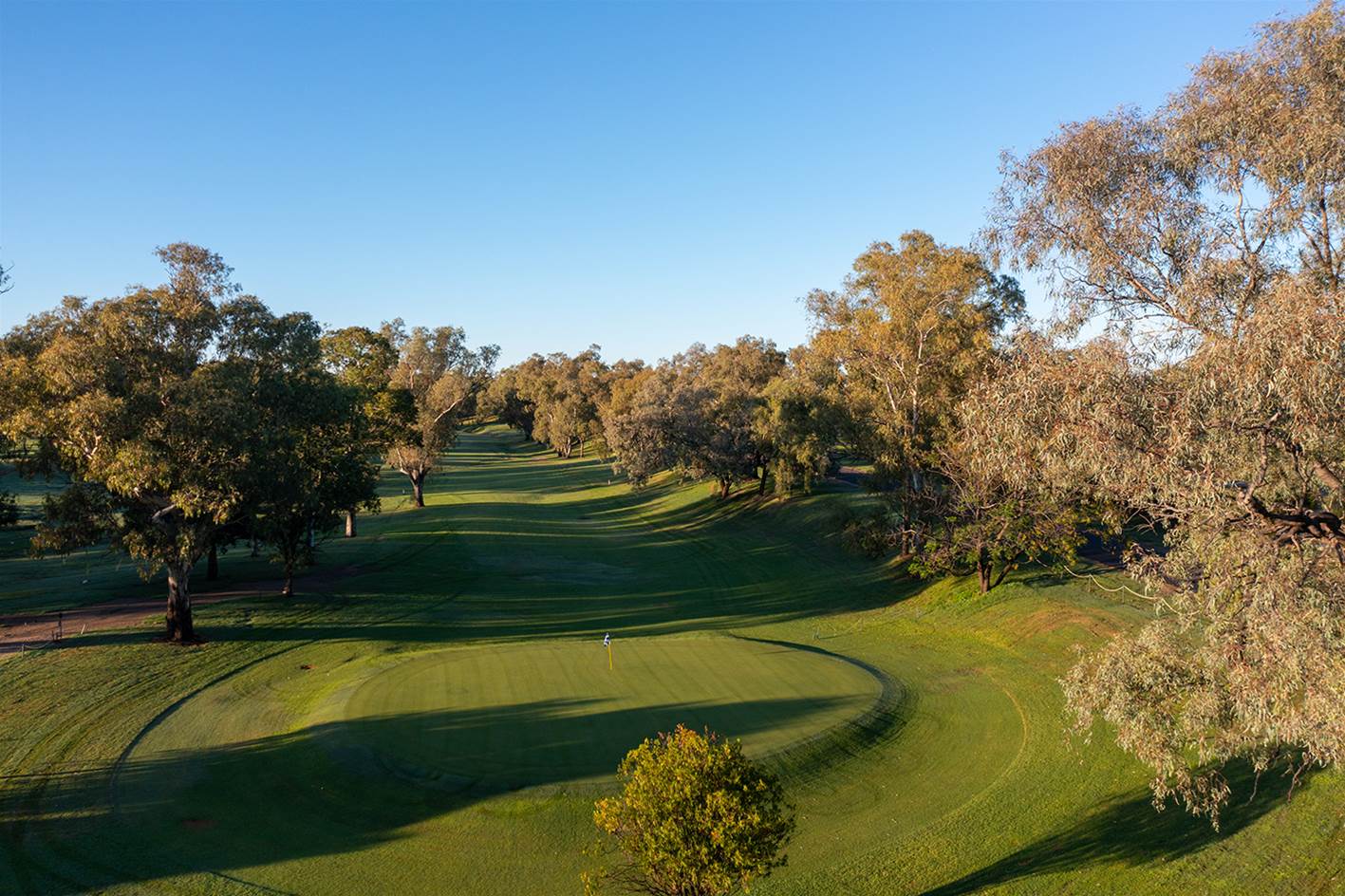 The narrow saddle-shaped fairway on the par-5 3rd is lined with trouble. PICTURED: Brendan James.

The round opens strongly with a 174-yard par-3 played from an elevated tee beside the clubhouse, through a narrow corridor of gum trees to a small green surrounded by neatly trimmed kikuyu and a steep descent to to the rough across the back of the putting surface.

These steep, mowed drops are a common feature of many greens in Moree and provide an effective par defense in place of bunkers. It’s true that there are no bunkers at Moree, at least on the course itself. There is however one next to the practice green.

The 2nd par-4 of 350 yards is one of my favorites in Moree simply because it’s not a hole that a designer would set out to create, but it’s a hole that you stumble upon and that is turns out to be a gem. The tee is set high above the fairway which has a slight right-to-left camber on the high bank that borders the hole to the right. This bank then runs diagonally down the fairway, leaving longer hitters with a slightly obscured view of the green and a club selection dilemma, knowing that a shot hit deep into the green is almost an automatic bogey.

A similar tree-covered bank lines the entire left side of the 492-yard par-5 3rd hole. The hike between the river gums on the left and right is tight. Venture too far left, past the trees, and your ball will be out of bounds through Coolibah St and into the graveyard. On the right, there are more trees to contend with. The hole opens up as you get closer to the green, which is set in a small amphitheater created by the left bank and the elevated 4th tee behind.

Moree’s front nine is great fun, but the back nine is, in my opinion, even better.

The 356 yard par-4 10th, which runs parallel to the aforementioned 2nd hole, covers similar rolling topography and requires an approach shot to be played to a plateau green located approximately 100 yards beyond the crest of a short steep uphill fairway.

While the river is an integral part of the course, East was sure not to make it the scorecard destroyer by forcing players to hit too much over the water during the round. You’ve crossed the river four times, all on the back nine, and three of those shots are unlikely to go into the water unless you land your tee shot.

The first of these tee shots is on the short par-4 11th, where the river runs under the front of the tee. At 297 yards, there are several options to successfully play that sharp left dogleg, but the key is to leave an approach that can be threaded between the gum canopy short of the narrow and long putting surface. Moree’s best par-3 is the penultimate hole and the one you’ll remember the most when you think about your round sitting in a recuperative artesian spa later. It has everything to make it arguably the most exciting tee shot of the set – an elevated tee shot, through a deep ravine crossed by the Mehi River, large woods left and right and a small target at 142 meters. I just have my pulse racing thinking about it.

The closing hole and adjoining 11th share a gently undulating topography which adds an element of good/bad luck to the bouncing ball as well as extra reflection for approach shots from an uneven lie. And that’s what you’ll get on this 440-yard double dogleg par-5.

From the start, you cross the river in a hilly fairway, which goes into doglegs. From here you must navigate your second (or third or fourth) shot over the river to a short stretch of fairway that curves back to the right and onto a green nestled beyond huge gum trees. It’s a spectacular approximation of a round for any golfer, but it will be interesting to see how the pros handle it when Moree hosts his first Legends Tour event on September 21 this year.

My trip to compile this story was my first at Moree Golf Club and I was pleasantly surprised at how good it really was. There are some really good and fun holes to play and the quality of the Bermuda 328’s kikuyu fairways and putting surfaces was outstanding, especially considering the club only has three greens staff…and Mother Nature, sure.

MEMBERSHIP: Membership is available in a range of categories including full, colt, junior, social and country. Check the club’s website for full details.

HOW TO GET THERE: Qantas operates two daily 90-minute direct flights between Sydney and Moree.

LODGING: Plenty of accommodation is available near the Golf Club, Moree Artesian Aquatic Center, cafes and restaurants. Visit the Moree Tourism website, www.moreetourism.com.au, to find out your options.