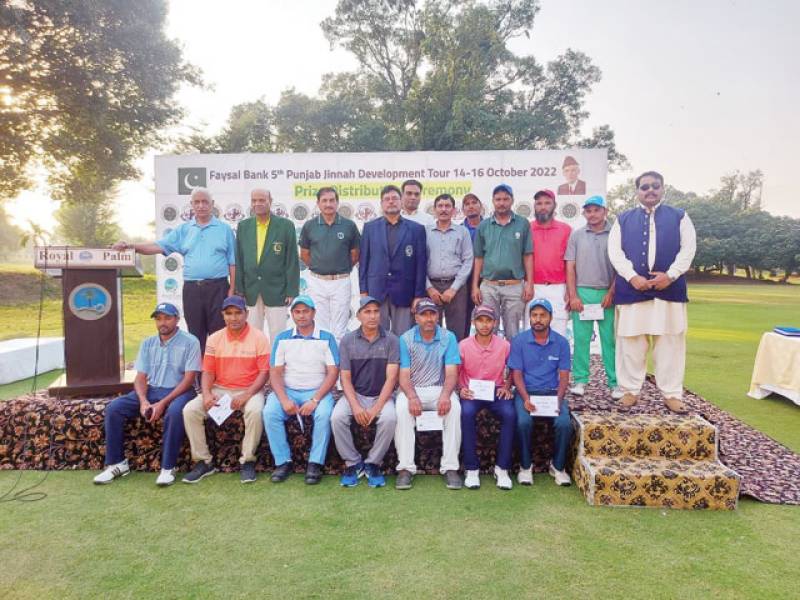 Following the title win, he has seen his golf career blossom and prosper and he now finds a huge opportunity as a golf professional from Pakistan. At the end of the three rounds and 54 holes, Rizwan soared to new heights by surely keeping his main challengers Shahzad Ali of Lahore Garrison and Misal Khan of DHA Karachi at bay. With three-round daily scores of 70, 67 and final rounds of 74, Rizwan had a total score of 211, five under par.

At the end of the championship, the awards were presented to the winners by Lt. Gen. (R) Muhammad Hilal Hussain, President of the Pakistan Golf Federation, in a ceremony attended by Dr. Asma Shami of Ladies Golf, Chaudry Hamid Asadullah from Punjab Golf Association, Jameel Khalid from Royal Palm, Muhammad Zakir from PGA, Nauman Khushi from Faysal Bank and the participating golf professionals.

When Dr. Asma Shami brought to General Hilal’s attention the urgent need for a policy for girls to go Pro, he wholeheartedly supported the idea. General Hilal, while addressing the award ceremony, talked about the Ace Junior League, appreciating the efforts of Munazza Shaheen who was tirelessly supported by Dr. Asma Shami.

“It’s the first junior league of its kind that has the potential to produce golfers of the highest caliber. In a very short period of four months, 160 children signed up for the league. It’s such a great initiative that in 10 years, remember my words, most golfers would be products of the AJL. It sets the platform for future golfers in Pakistan.