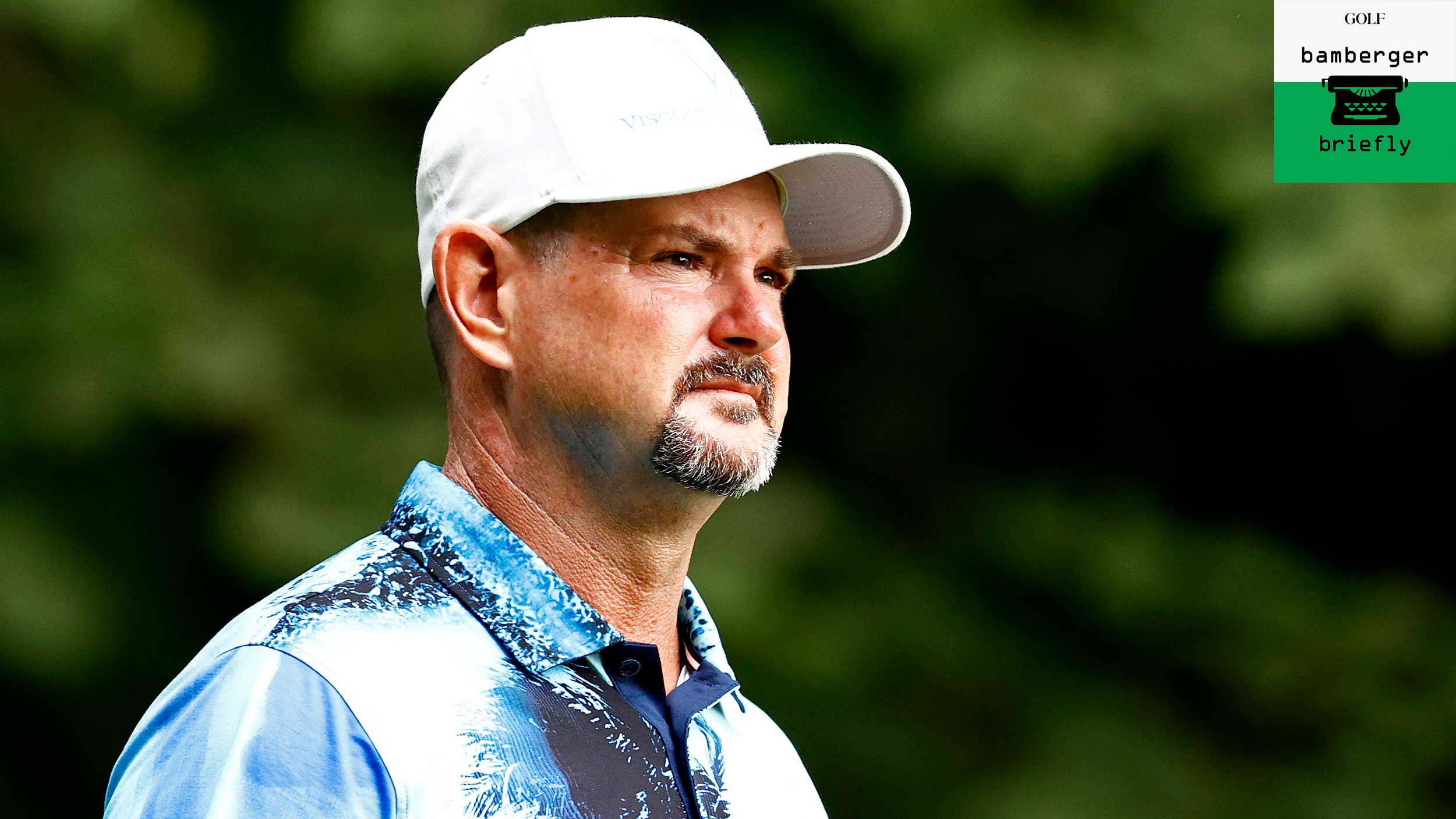 Rory Sabbatini, the native South African golfer who lives in South Florida, is home for the holidays. He finished for the year. He is 45 years old. He has been a professional golfer for more than half of his life. He’s never had a year like this.

Sabbatini left a tournament with a piece of shiny metal tied to a ribbon. That is, his silver medal for his second place at the Olympic golf tournament in Japan, where he represented Slovakia, his wife’s homeland.

The famous fast-swinging, fast-playing golfer walked away from another golf tournament – last week’s RSM Classic in Sea Island, Ga. – with four shiny stickers on the face of his fairway wood.

This silver medal made Sabbatini a golf legend in the short history of golf in Slovakia.

This quartet of brilliant stickers made Sabbatini another uplifting tale in the long history of weird PGA Tour rules debacles. These four shiny stickers made one of his clubs, a fairway wood, non-compliant and this led him to be DQed.

Sabbatini played with veteran Colombian golfer Camilo Villegas and Doc Redman, former Clemson golfer and 2017 US Amateur winner. Sabbatini declined to say which player brought up the issue with him.

The stickers, Sabbatini said, are something he and his instructor, Rick Smith, have used in conjunction with Gears Sports, a camera-based motion detection tracking system.

Sabbatini had used the system in a pre-tournament training session to get more information on the exact spot where his clubhead was at different points in his swing. He didn’t know that the stickers had to come off before the tournament started.

Sabbatini said he didn’t believe he had played in an event with the stickers on his clubs before the Sea Island tournament.

“So we come in and I ask [Tour rules official] John Mutch if there is a problem with the decals, and he said he thought there was, but would check with the USGA to be sure, ”Sabbatini said. “I never signed my card. And then he said, ‘Look, there’s no way around that. It is a non-compliant club. I could see he felt bad about it, but a rule is a rule.

I was not bored. I was very disappointed. I had shot 68 and it was as if it had never happened.

Rory Sabbatini on his rule violation

“I asked, ‘What’s the difference between those little stickers, which don’t do anything, and duct tape? ”Sabbatini said, describing his conversation with Mutch.

You can’t, by the way, add lead tape to your clubhead during a round. The rulebook of golf tries to cover it all. It is not, but it is the goal.

Stickers, by the logic of the rules, are an example of something that could fundamentally change the playing characteristics of a compliant club. That these particular the stickers, in the Sabbatini case, didn’t matter. Others might. Golf needs each rule to cover as many situations as possible and eliminate ambiguity and judgment calls when possible.

Sabbatini had broken a rule of golf. There is, by the rules of golf, no penalty of two strokes per infraction, not in this situation, not anymore. Just that stern sentence from above.

“I think it’s a pretty stupid rule, but it’s my fault – I should have known that,” Sabbatini said. “I was not bored. I was very disappointed. I had shot 68 and it was as if it had never happened.

What an end to his playing year. Yet what a year. Sabbatini was the oldest athlete to represent Slovakia at the Olympics this year. One teammate won a gold medal in women’s shooting, one won a silver in the men’s individual canoe and four won bronze medals in the men’s team canoe. There is a lot of wilderness in landlocked Slovakia. Also, about two dozen golf courses.

Sabbatini’s silver medal sits at his home in Boca Rotan, above his bar. At one point, it will be on display in the pro shop at Broken Sound Club, his original course in Boca, where the PGA Tour Champions make an annual stop.

“Winning the medal didn’t change my life,” Sabbatini said. Although he and his wife, Martina Stofanikova, traveled straight to Slovakia after the Olympics, where he received a reception like no Slovak golfer before him has ever done. That is to say, he received a reception, period. The first sentence of his Wikipedia article now reads: “Rory Mario Trevor Sabbatini (born April 2, 1976) is a South African-Slovak professional golfer”.

Sabbatini said that at the end of his playing career – “there was a lot of wear and tear in my body” – he would like to spend more time trying to develop the game in Slovakia. He clearly loves his adopted homeland, which he described as a combination of rural upstate New York and mountainous Washington state.

Sabbatini has had a long and successful career filled with interesting moments, some but not all of his own making. At the 2007 Masters, he, Retief Goosen and Tiger Woods finished tied at three for second, two strokes behind Zach Johnson. Few golfers have competed in as many tournaments as Woods, or have shared as many RV parks near tournament venues with John Daly and Davis Love.

Sabbatini and Woods have never been like buddies. What they share most is the trauma of sick bodies. They both have a medical and professional relationship with Centinel Spine for their different and complex medical needs.

Sabbatini said his pain, before surgery performed by a Centinel Spine medical team, was so severe that he “ate Vicodin like it was Skittles.” He said his pain gave him a glimpse of the kind of pain Woods had endured in his career. He remembered the pressure of never knowing, overnight, if he would be able to play. He recalled a tournament in Las Vegas where, after playing 54 holes, he was unable to play the fourth round because his body had “locked in”.

He said he watched the unique swing that Woods posted on Sunday night and found it “very impressive.” Only a fool, Sabbatini said, would bet against a Woods comeback. “It’s superhuman, what he accomplished,” Sabbatini said. “What he did is what folklore is made of.”

But Sabbatini, in his cheeky way, also contributed to the lore of the game, sometimes doing nothing.

In March, in the Players’ third round, Jordan Spieth struck a wild tee shot that ricocheted off a tree before nearly hitting a player in the squad in front. A boom microphone picked up Spieth’s comment: “Is this Sabbatini?” Oh my God. I couldn’t pick a worse person to hit against. Spieth knew what he was talking about. No one would call Sabbatini mellow.

At the 2005 Booz Allen Classic outside of Washington, DC, Sabbatini had become frustrated with the icy pace of play from teammate Ben Crane. On the 17th, Sabbatini simply completed a hole and went to the 18th tee before Crane even reached the 17th green. It was very unusual. Later, by statement, Sabbatini apologized for his breach of etiquette. He said he and Crane would be playing a practice round together soon.

Fast forward a dozen years, to 2017. Crane was playing in the first round of the Albertsons Boise Open, a Web.com event, when he received an eight stroke penalty, per rules such as they were written at the time. . He described what happened, via Twitter. Here is the full text:

“I had a new ‘it’s golf’ moment today. Was penalized 8 strokes for having tiny stickers on two clubs (help launch monitors collect data).

Sabbatini must have missed this tweet. But now he knows what Crane knows: these stickers can have you.

Michael Bamberger writes for GOLF Magazine and GOLF.com. Before that he spent almost 23 years as senior editor for Illustrated sports. After college he worked as a journalist in a newspaper, first for (Martha’s) Vineyard Gazette, later for The Philadelphia Investigator. He wrote a variety of books on golf and other topics, the most recent of which is Tiger Woods’ second life. His magazine work has been featured in several editions of The best American sports writing. He holds a US patent on The club, a utility golf club. In 2016, he received the Donald Ross Award from the American Society of Golf Course Architects, the organization’s highest honor.