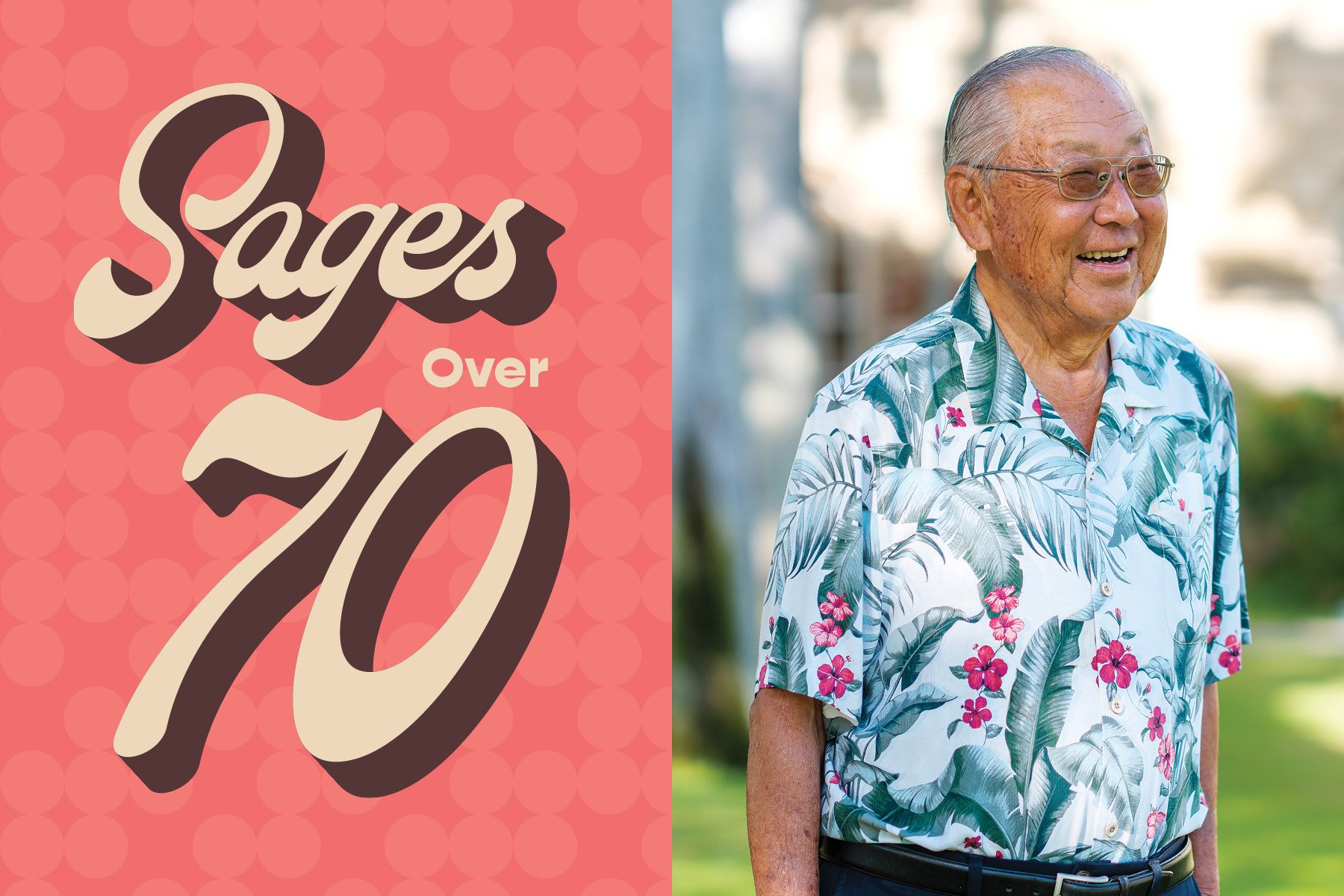 He is now a Master of Kamehameha Schools after serving as an attorney, appellate judge, UH General Counsel, and President of Saint Louis School.

Walter Kirimitsu is as ambitious and enthusiastic about his work at 81 as when he was a young man climbing the career ladder. After graduating from Saint Louis School, UH Mānoa and University of Michigan Law School, the down-to-earth local boy has built a long and illustrious legal career in Hawai’i and he has no intention of stopping anytime soon.

This year he was named Master of Kamehameha Schools, a position created in 2000 to oversee the trust and trustees, under the direction of a probate judge. He analyzes the trustees’ annual reports, forms trustee selection committees and evaluates all of the succession processes.

He says he doesn’t know if and when he will retire, “but for now I think as long as I can serve as a master, I will continue. After that, who knows, maybe I’ll join the professional golf association circuit.

Kirimitsu grew up in the Kalihi-Pālama region, and he loves that his work brings him back to his hometown. His parents, second-generation descendants of Japanese immigrants, had a half-acre vegetable garden at the foot of the Kapālama campus. He remembers helping on the farm every day as a child.

“I had no idea what the Kamehameha Schools Kapālama campus was like when I worked on the farm, but it was by chance that I was raised in Kapālama and spent time there. pretty much my childhood.”

In his early years, Kirimitsu worked as a civil litigation attorney in Honolulu for over 20 years. His primary focus was personal injury cases, representing those injured in all types of accidents.

“There have been a number of different instances where we have represented people with severe disabilities,” he says. A prominent case involved a young girl who was sitting in the passenger seat of a car when the driver hit an embankment. The young girl broke her neck and was paralyzed. “We were able to get a significant settlement over the rest of his life,” he says.

He was the president of the Hawaii State Bar Association in 1990.

He was appointed by Governor Ben Cayetano as Associate Judge of the State’s Intermediate Court of Appeals and served there for five years. While serving as an appellate judge, Kirimitsu was assigned civil and criminal cases by the Supreme Court of Hawaii.

Thereafter, he went to work for his alma maters, serving as the first general counsel and vice president of legal affairs at UH, then as the first non-clergy president of St. Louis School. He says being president of Saint Louis for nine years has been more stressful than any of his previous jobs, including as a judge, which he calls relaxing.

“He’s a very smart, talented and well-liked person,” says Alvin Katahara, a friend and former employee of Saint Louis School. He first met Kirimitsu about 10 years ago when Kirimitsu hired Katahara to be the marketing manager at Saint Louis School when he was president.

Katahara confesses that Kirimitsu, although known for his brilliant career, is also a “more than accomplished karaoke singer”. He remembers the one time Kirimitsu choked up from the pressure while trying to sing in public.

“He was asked to sing the national anthem at a UH baseball game in front of a crowd, and now Walter has a really good voice. He got up there in the middle of the field, was introduced, he was told gave the mic and he forgot the words,” he laughs.

Katahara calls the retired judge both a friend and a mentor. He says he admires and tries to emulate Kirimitsu’s upbeat attitude – always welcoming and warm. He also took over how Kirimitsu asks for advice.

“He trusted people’s instincts,” Katahara says. “He would look for my instincts and he would put a lot of trust in my gut reaction and whatever the answer was.” Katahara says that Kirimitsu is also the best storyteller he knows, able to tell a story about anything and relate it to personal experience.

After Kirimitsu left St. Louis in 2015, he told his wife he was retired. “She said, ‘What is this? You never retired,” Kirimitsu says. “Well, I retired from Saint Louis.”

He and his wife, May, have been married for almost 60 years and have three children.

He continued to work as a member of the State Judicial Selection Commission, helping to select new judges in Hawai’i, through 2017. He also has a solo mediation and arbitration business that operates on-call. His schedule still allows him to play golf once a week, spend time with his wife, and perform his role as a teacher in the Kamehameha schools.

“He’s a St. Louis alum and a very proud alum so I was surprised he took this job (Kamehameha) but I know there’s probably a good mission he sees,” says Katahara.

“It doesn’t matter if he helps someone from Saint Louis or Kamehameha schools, they will be leaders in our community and I know he will do well to help (them).”