Sweden take the lead in the World Amateur Team Championships 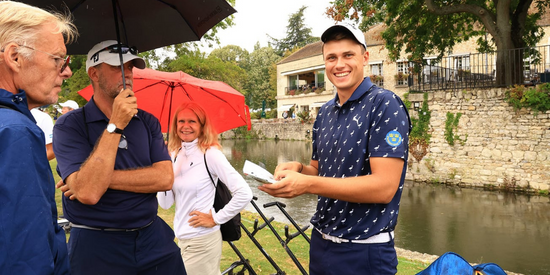 Sweden take the lead in the World Amateur Team Championships

Sweden, powered by an 8-under 64 from Tobias Jonsson and a 6-under 66 from Ludvig Aberg, overtook Japan, who were leading after rounds 1 and 2, to take the lead at 23 under. 407 after three rounds of the 32nd World Amateur Team Championship at Golf de Saint-Nom-La-Bretèche. “We won’t win the world championship with the brake,” Swedish coach Jonnie Eriksson said of Saturday’s final round at Le Golf National. “We have to do our best and hope that some things go our way. There are seven or eight teams in contention. It’s going to be great tomorrow.

The Swedes moved up 10 spots in the standings based on their 14-under 130 in Round 3, which is the second-highest team score in Round 3 in Eisenhower Trophy history. The United States set the mark of 128 in Japan in 2014 thanks to Bryson DeChambeau’s championship record 61.

Going into the final round at Le Golf National, site of the 2018 Ryder Cup and the 2024 Olympics, Sweden are one step ahead of leaders Japan, Italy and the United States of America. of the second round. The French hosts trail by two strokes in fifth place.

“We decided to be very aggressive today because we were a few shots back,” Jonsson said. “I went today and played solid from the start.” The Mercer University junior shared the day’s low round honors with Ashita Piamkulvanich of Thailand, who shot a bogeyless 7-under 64 at Le Golf National.

Italy, who were in second-place solo at the start of the day, drew a 3-under 69 from Pietro Bovari and a 2-under 70 from Open Championship 2022 low amateur Filippo Celli.

“To be honest, we didn’t play our best,” Italy captain Matteo Delpodio said. “It was a difficult day. We had to save a lot of parts. Celli was good on the back nine, but he didn’t play his best golf but managed to manage a good score. It’s pretty good because there’s room for improvement, and we know that tomorrow we’ll have to go low to bring this championship home.

Japan, who held a five-stroke advantage at the halfway point, gave up their lead as they couldn’t cope with Sweden’s weak push.

Taiga Semikawa posted a 3-under 69, but World Amateur Golf Ranking®/WAGR® #1 Keita Nakajima’s 3-over 75 was a score count.

“I think playing with the big lead on day one and then a big lead after day two, there’s always going to be a tough day,” Japan captain Gareth Jones said. “I hope day 3 is the tough day and not day 4. You never want to defend the lead. You can’t do that. I think today is a lesson for the guys that we have to keep playing because there are great players here.

USA combined a 4 under from Michael Thorbjornsen with a 3 under from Austin Greaser to get back in contention and knocked out a 1 under from Gordon Sargent.

“They rode it beautifully,” USA captain Diana Murphy said. “We struggled with the greens, but in terms of play off the tee it was really impressive. I would say that was our strongest day. The Greens had us today, but they have found a deeply composed spirit. We are here to give him a very good fight. We would love to go home with the Eisenhower Trophy.

Rounding out the top 10, Spain sit in sixth place, followed by Norway in seventh, Argentina in eighth, Wales in ninth and fast-moving Austria in 10th.

In 1958, the United States Golf Association asked the R&A to join them in sponsoring a world amateur golf team event to be played every two years in non-Walker Cup years. Between 35 and 40 nations were represented at the first meeting and President Dwight D. Eisenhower presented the trophy bearing his name. The committee for the event was to be known as the World Amateur Golf Council and is now the International Golf Federation. Teams of four players from each country competed over 72 holes with the top three scores from each round to count. The first competition was between 29 nations at St Andrews, with Australia beating the United States in a play-off. In 2002, the format changed to teams of three with the top two scores counting.