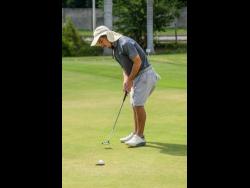 Jamaica Golf Association President Jodi Munn-Barrow has predicted that this weekend’s 55th Jamaica Golf Championships will bring out the best in all participants vying for the 2022 national golf title. championship starts today at the Tryall Golf Club in Hannover.

“We have some great players coming in with two of the last three winners, Michael Maguire who won last year, and Patrick Cover from 2019, so I really think we’re going to have an exciting event,” Munn-Barrow said. .

The championships taking place at the Tryall Golf Club for the fourth consecutive year have seen an annual increase in the quality of play at the tournament, and according to Chairman Munn-Barrow, this year should be no different.

“Yes definitely. We had below par scores last year on a tough Tryall Golf course and I think we are going to achieve a similar result this year if not better. The better the competition, the higher the level of game you produce will be high,” she added.

The 2022 championships will carry an overall purse of US$100,000 of which US$20,000 will go to the top senior player. Munn-Barrow believes a few players have so far shown they will enter the tournament with the “favorite tag”.

“Absolutely, I mean the top prize is US$20,000, so that’s a big purse for some players. I’m sure they’ll all have that prize in mind. I think the last two winners, Cover and Maguire, will be at the top. For the amateur section, I think we will have a tough battle between Justin Burrowes and William Knibbs, but we also have amateurs coming from Trinidad and Tobago. We will have the winner of the Open of Trinidad and Tobago, Ben Martin, so I think we’re going to have an exciting amateur section as well,” Munn-Barrow said.

Reigning amateur champion Justin Burrowes, who was busy fine-tuning the golf course preparations ahead of the tournament, said he had adopted a “positive mindset” and that this he hopes will enable him to keep his crown.

“My mindset is just to stay as positive as possible the entire time and do my best to perform. I try not to complicate things and keep it as simple as possible. I’m pretty confident,” Burrowes said.