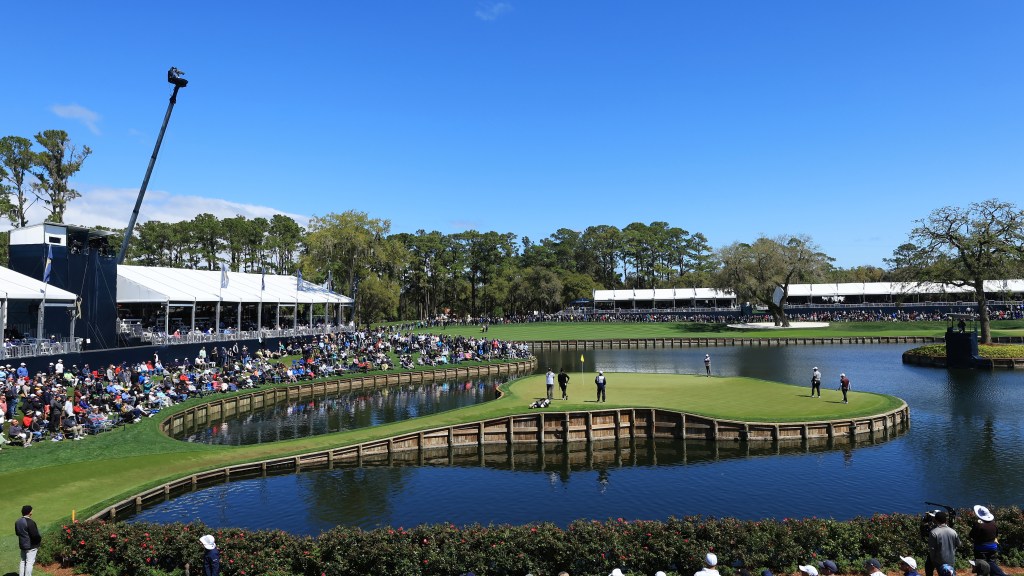 Whenever you and your friends go to tee off for a round, many dangers come into play on a golf course.

Sure, there are bunkers, trees, and thick rocks, but the water hazards are some of the most annoying and inconvenient.

Look no further than Rickie Fowler in Round 3 of the 2022 FedEx St. Jude Championship. Needing a solid finish to qualify for next week’s BMW Championship, he put two consecutive shots in the water on the 18th at TPC Southwind.

If you take a look at the four golf courses that have gobbled up the most golf balls on the PGA Tour since 2003, one of those courses includes a famous island green. It’s probably no surprise.

The others may not be what you expect, but it can be shocking how many times PGA Tour pros have hit golf balls in water.

Check out these courses below:

Shane Lowry of Ireland plays his shot on the 16th hole during the final round of the Honda Classic at PGA National Resort And Spa on February 27, 2022 in Palm Beach Gardens, Florida. (Photo by Mike Ehrmann/Getty Images)

The PGA National Resort’s Champion Course hosts the Honda Classic, and 4,730 golf balls have hit the water here over the past 20 years. Considering this is a course in Palm Beach Gardens, Florida, the water damage to golfers should come as no surprise.

General view of the 16th hole during the final round of the Memorial Tournament at Muirfield Village Golf Club on June 5, 2016 in Dublin, Ohio. (Photo by Matt Sullivan/Getty Images)

Jack’s venue, Muirfield Villace Golf Club, hosts the Memorial Tournament every year, and it has also hosted a Presidents Cup and two Tour events in consecutive weeks of the 2020 season. 4,753 golf balls found the water here on its tricky course.

A general view of the 18th hole during a practice before the Players Championship on the course at TPC Sawgrass Stadium on March 07, 2022 in Ponte Vedra Beach, Florida. (Photo by Sam Greenwood/Getty Images)

The Players Championship site in Ponta Vedra Beach, Florida should come as no surprise, given the island’s famous 17th hole green, but there are plenty of other waters lurking on Pete Dye’s famed layout. 4,809 golf balls have hit the water in the past two decades.

A general view of the 18th green during the final round of the FedEx St. Jude Classic at TPC Southwind on June 11, 2017 in Memphis, Tennessee. (Photo by Marianna Massey/Getty Images)

Surprise! The site of the first event of the 2022 FedEx Cup playoffs, TPC Southwind in Memphis, Tennessee, sees more golf balls hit in the water than any other stop on the PGA Tour. Water lurks in many places, including to the left of the 18th fairway, and it could prove key to crowning a FedEx St. Jude Championship champion.