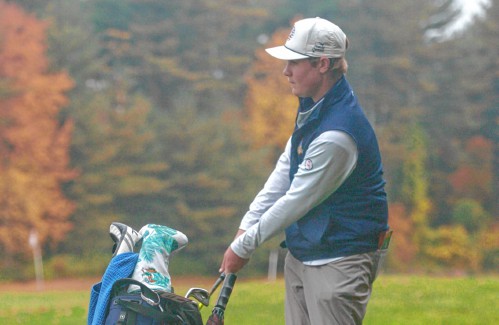 WILBRAHAM – Wilbraham Country Club has been very kind to the Booska family.

Cody Booska, a 2014 Franklin Tech graduate, set the Wilbraham Country Club course record at a 2017 Massachusetts amateur qualifying event with a 64 of 8 under par.

He has to run in the family to play well there. Brady Booska, Cody’s younger brother, competed for the Eagles on a rainy outing at Wilbraham at Western Mass. Division 3 Golf Championship on Monday and shot the lowest round of the day – a 78. Booska won the individual title, beating Lenox Patel’s Devan who carded an 80 to clinch second place honors.

Booska, a junior, can try to keep up with Cody, who came out as Western Mass. Div. 3 individual winner in 2012 and 2013, his junior and senior years at Franklin Tech.

“It’s really good to win this,” Booska said. “I didn’t think I had enough to win, but apparently I did. I hit the ball well. I kept my confidence. I didn’t give up and that helped me. »

Franklin Tech coach Sean Knightly said he was impressed with how Booska performed, overcoming the pressure to win the tournament.

“It’s in his blood,” Knightly said. “His whole family are great golfers. Brady has improved a lot since last year.

In a shotgun tournament like Monday’s, everyone finishes around the same time, which can make it difficult to know the score needed to win or qualify for the state tournament.

Booska’s strategy in this style tournament? He said he wanted to make the moves he could and hoped his score would hold up in the end.

“I just try not to think about the scores,” Booska said. “I was just trying to make some starts. Pars are a good score here and that’s what I was trying to do.

Booska won’t be the only Eagle golfer heading to the United States. Franklin Tech finished with a team score of 358, tied for third with Monty Tech. Team scores are calculated by the team’s top four scorers, and with both teams tied, the player #5 with the higher score of both teams determined the tiebreaker. It was Gabe Mota for the Eagles, who shot 97 to beat Monty Tech’s Jack Lee, who finished with a 99.

By finishing in the top three, Franklin Tech earned a spot in Div. 3 state tournament taking place next Tuesday at Ledges Golf Club in South Hadley.

“I’m very proud of this team,” Knightly said. “We fought a lot this year. For these guys to finish strong, I’m extremely proud of them. They really impressed me because they never gave up.

Tyler Lafountain shot an 89, Matt Marchefka shot a 95, Alex Sulda finished with a 96 and William Belval came in with a 105 for the Eagles.

This group will travel to South Hadley to continue their momentum.

“It will be fun,” Booska said. “It’s another day off from school.”

Pioneer posted the second-best result among Recorder-area schools on Monday, finishing with a team score of 369 to take sixth place overall.

Brayden Thayer led the way with an 89, Michael Stennes and Ethan Mauthe each shot 92, Ben Werner finished with a 96, Hugh Cyhowski scored a 103 and Cam Curtis totaled a 106 for the Panthers.

“It was a really good day,” Thayer said. “It was a great experience to play in this area again, just like last year. The conditions were tough. It was cold, damp and still raining. The ball certainly didn’t fly as much and the greens were quite slow. It’s harder than the courses we normally play on.

Thayer said he enjoys playing at big tournaments like Western Mass., challenging himself against some of the best golfers around.

“There’s more at stake with these tournaments,” Thayer said. “It’s more fun playing with other guys and seeing the competition at Western Mass. It’s always a lot of fun.”

Turners Falls finished with a team score of 395 to take eighth place, led by Jackson Day who shot 91. Joey Mosca followed with a 92, Grady Deery and Reese Ewell each finished with a 106, Logan Addison a scored a 107 and Braeden Talbot had a 115 for the Thunder.

Phineas Tuttman and Logan Moore are tied for Mohawk Trail’s low individual score with 96 points. As a team, the Warriors finished with a score of 399 to take ninth place. Rounding out the Warrior competitors were Oliver Johnson (101), Gage Patenaude (106), Deegan Kelleher (108) and Grady Patenaude (117).

Wilbraham’s rainy course played differently than Mohawk Trail was used to during the season.

“I didn’t play that well,” Tuttman said. “The greens were really fast compared to Edge Hill where we normally play. I wasn’t used to that. It was a lot of fun at this course. It was quite narrow but I liked it.

Tuttman said he enjoyed the stress of playing in a Western Mass championship.

“It’s a good adrenaline rush to play in there,” Tuttman said. “Playing under pressure is a fun thing. I love seeing all the cameras and all the people come out. I love playing in those.