The secret to golf equipment that no one tells you. PISA Putter, live on Kickstarter! 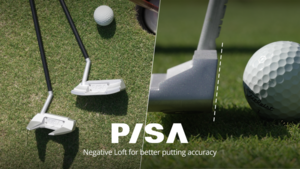 It’s important to focus on developing golf skills, but choosing the right clubs to suit your style and skill set is crucial. Missed shots in short games that are inside 100 yards of the green will obviously not help lower your scores.

The reason the ball goes out when putting is because when the putter hits the ball, it immediately enters the skid zone instead of giving a pure roll. This causes the ball to bounce away from the target. It is important to choose a putter that helps reduce slippage or excessive bouncing. PISA putter which helps achieve pure roll was recently released on Kickstarter.

And low-friction materials are applied to the face of the putter to reduce friction that interferes with spin, which has been the weakest point of a negative loft putter. The low-friction materials that were first introduced by PISA maximize the spin benefits of negative loft and minimize the chance of bounce and slippage by eliminating friction on the putter face. Another satisfying aspect is the distinctive sound of the PISA putter hitting the golf ball.

After testing the performance of the negative loft and its initial spin rate through the Quintic Ball Roll System test, we were able to observe that PISA provides an immediate pure roll when hitting while the regular putter cannot.

PISA is an officially certified product by the American Golf Association, which means you can officially use it in any professional tournament.

The PISA marketing team quoted: “When you hit a ball with a conventional putter, it bounces or slides on the ground for the first few inches instead of rolling immediately. We invented a putter that uses low-friction materials so ball direction and distance improve accuracy and result in consistent putting performance. PISA was inspired by the famous Galileo gravitational acceleration experiment at PISA’s Learning Tower.

Currently, PISA is available on Starter and can be purchased in either a blade type or a mallet type putter. Both types of putters can be purchased at a 50% discount with the Super Early Bird offer.